Skip to content
On the first day of my Nature Writing class, we were assigned to read a book of our choice that had a strong nature theme. It could be anything, from fiction to poetry. I chose Bill Bryson’s A Walk in the Woods (1998) for several reasons. From the time I read Mother Tongue: English and How It Got That Way, I’ve been a Bryson fan. Then, too, my roots are in Appalachia. Last but not least, I had the book on my shelf—still unread. Now that I’ve read it, I want to share. 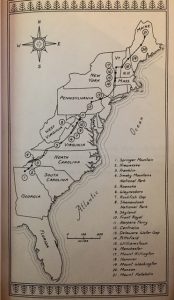 The Appalachian Trail (AT) is approximately 2100 miles. If you read the book, you will understand why the exact length is unknown, but for my purposes, it is sufficient to know that it’s hugely long and stretches from Georgia to Maine. Bryson (not a hiker) starts with a chapter describing his almost whimsical decision to walk the AT and the buying frenzy of assembling the necessary equipment. And right away I was drawn in. As a reviewer for the Chicago Sun-Times said, “Bill Bryson could write an essay about dryer lint or fever reducers and still make us laugh out loud.”
It’s difficult to cite representative funny passages because (1) there are so many of them; and (2) often the humor is in a whole situation, scene or exchange, not a succinct quip. He started in Georgia in March, intending to end in Maine in October, a timetable intended to avoid suffocating heat in the south and New England winter. In the even, that March brought a record cold snap, and the first day of spring came in the midst of a blizzard. And that’s pretty much the way the hike went: never quite what was planned.
Bryson’s writing is take-you-there-with-him vivid. For example, “…we were half-blinded by flying snow and jostled by gusts of wind, which roared through the dancing trees and shook us by our backpacks. This wasn’t a blizzard; it was a tempest.”
I like the insights he shares. “Distance changes utterly when you take the world on foot. A mile becomes a long way. . . .The world, you realize, is enormous in a way that only you and a small community of fellow hikers know.” This is true only for those of us living the typical American life or a similar one in another developed country—but that’s true enough for most of his readers.
Reading a Bryson book is always a learning experience. A Walk in the Woods is packed with history, geography, and botany. The idea of the AT started with Benton MacKaye in 1921, work actually started in 1930 under the auspices of Myron Avery, who mapped it out, extended it from 1200 to over 2000 miles, supervised construction, and convinced hiking clubs to provide volunteer work crews.
Bryson is a skilled observer. The details he notes allow the reader to see how the trees of the north differ from those in the south, identify denizens of the flower-strewn meadows, and quake beside sheer drop-offs. And he is wonderfully in touch with real people—people who can cite statistics about the rarity of a hiker being attacked by a black bear, and the greater rarity of one being killed, but still have anxiety attacks because “It does happen!”
The only thing that put me off a bit about the book was a somewhat stereotypical disdain for fat people and hillbillies. Perhaps that’s where the book’s age came into play.  Bur it never tipped into meanness. In any event, it didn’t keep me from enjoying the book overall. There are moments of tenderness, and a budding awareness of the danger to our environment.
I’ll end by mentioning his walking companion, Stephen Katz. It wouldn’t have been the same book—and probably not as good—without Bryson’s unexpected fellow traveler. It’s a feel-good book from beginning to end. Other than that, I won’t tell you how it ends—except to say, “They both lived to tell the tale.”
Bottom line: Read this book—or any Bryson book—and be prepared to be drawn into non-fiction.