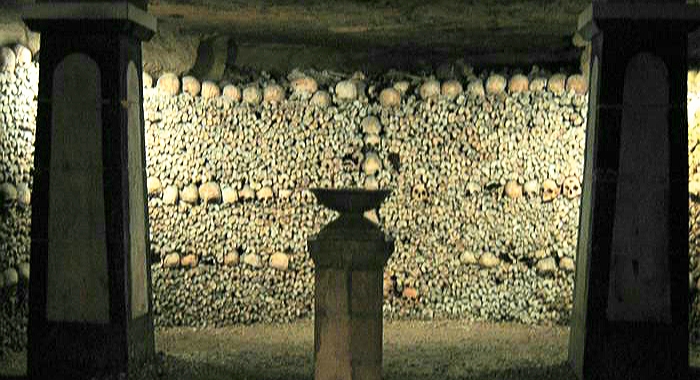 We’ve all got bones. The average adult has 206 of them.  Babies are born with 300 bones, but  with age, tiny bones fuse together to form the larger bones of the skeletal system. So, when we think bones, we often think skeletons.

Humans have had multiple uses for skeletal remains since prehistoric times.

Imagine sitting down to a meal of ground-up bone, served on a plate made of burned bones, while two musicians—one rattling two sawed-off ribs together and the other ominously shaking part of a horse’s skull—provide grim ambience in the dim candlelight. Off in the corner, an oracle shoves some bones into a fire in an effort to predict whether the crops you just fertilized with shattered bones will yield a hearty harvest.

Here, in one handy list, are several uses for bones besides propping up a body (not always human).

As an instrument, the bones have their roots in traditional Irish and Scottish music, and immigrants from those countries brought them to America, where they found a home in bluegrass and other folk genres. They’re similar to other clacking percussion instruments like the spoons, the Chinese paiban, and castanets.

The jawbone, meanwhile, is originally an African instrument that made its way to the Americas as a result of the slave trade. It’s usually the jawbone of a horse or another equine (like a donkey or zebra), that’s been stripped of all flesh and dried. Once it’s dry, the teeth become so loose they rattle around in their sockets.

But it’s more than a simple rattle—fortune telling: scapulimancy and plastromancy. Relatives of augery, these involve writing questions on bones, heating them up until they crack, and then interpreting the cracks.

This form of divination was called scapulimancy when it was performed with the shoulder bone of an ox (the scapula). When the practitioner sought divine inspiration on the inside of a turtle shell (a plastron), it was called plastromancy.

Most commonly, inhabitants of Europe, western Asia, and North Africa most commonly inspected the bone after all flesh was scraped away – apyromantic. Practitioners who lived in North America and other parts of Asia more often used fire – pyromantic.

Unlike true porcelain, which contains only minerals, the ceramic material known as bone china includes bone ash. It originated in England in the 1700s and for a long time, most, if not all, bone china was made there. The addition of bone ash makes the finished product stronger.

Bone meal, as ground-up bones are called, has found its calling as plant fertilizer. It contains phosphorous and calcium, nutrients often leeched from the soil by common crops.

Most gelatin is made from the byproducts of the meat and leather industries, usually bones and skin. In its purest form, it’s 98 to 99 percent protein and is nearly tasteless and odorless. Its use dates back to the medieval era.

Gelatin ends up in obvious foods like gummies, but can also be used in a wide variety of ways to stabilize, thicken, and add texture to the things we eat. It’s also used to make modern film.  Gelatin and animal glue are closely related, though use of the latter has largely disappeared, essentially eliminated by the invention of synthetic adhesives.

The second type, trabecular bone, is soft and spongy. It’s often found inside large bones and in the pelvis, ribs, and skull. Though less dense than cortical bone, it’s quite hard and protective.

We’ve all seen movies or TV shows in which a skeleton is used to tell whether the dead person was male or female.  Here’s how.

Differences in bone mass and geometry give males greater skeletal integrity, which may contribute to the lower incidence of stress and thin-bone (osteoporotic) fractures in males.
A male’s skull is usually bigger and bumpier than a female’s.  There are specific anatomical differences in frontal brow, eye orbits, lower jaw, and shape of chin.

Examination of the pelvis is the easiest method to determine the sex of a skeleton. The female pelvis has a wider subpubic angle by 8-40 degrees, is rectangular (vs. triangular), and oval (vs. heart-shaped). The sacrum for females is shorter, broader and curved outward (vs. inward). All of this is to make childbirth easier.  Women who have borne children have scars on the surface of their pelvis.

Don’t forget the joints! What would bones do without them? Not much.

Bones provide the structure for our bodies. Each bone plays a role in the mechanics of body function, so if a bone is broken, none of the bones around it can function properly.  Bones get little attention unless injured or diseased.

The importance of bone health is highlighted in National Osteoporosis Month, which is annually in May.

I, for one, think October should be National Bone Month. After all, it’s the month when we most often see and (for most often us) think about bones.