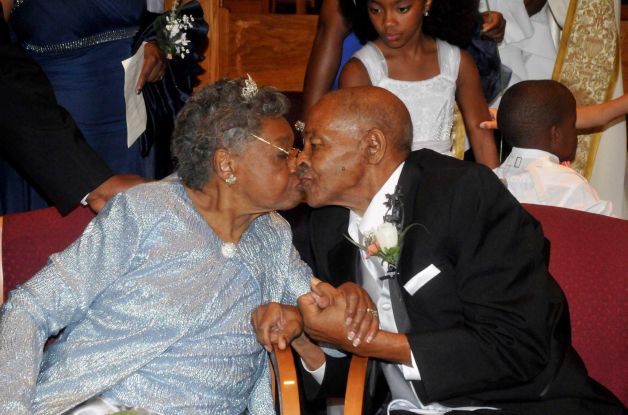 Decades ago, the title of this book first brought that phrase to my awareness. Legally, of course, very married is nonsense—as are a little bit or sort of married. Legally, either you are or you aren’t. Is being married for a long time the equivalent of being very married? Many seem to think so. Marie Hartwell-Walker wrote “How To Beat the Odds: Tips from the Very Married” and featured a single photo of an elderly couple. Her article lists 13 tips from “long-married couples.”

I’ve paraphrased these tips below.

Becky Whetstone (15 Things the Very Married Have That You Probably Don’t) makes many of the same points. But she also estimates that 12% or fewer of married couples are truly happy. Although neither of these lists specifically mention politics or religion, the Pew Research Center has data indicating that the former is more important than the latter:

Many of these tips, in one form or another, are included in Katherine Willis Pershey’s Very Married: Field Notes on Love and Fidelity. As the title indicates, she highlights another factor often presumed to characterize the very married: sexual fidelity. Many presume—and common sense would tell us—that sexual infidelity will harm a marriage.

Sean Illing’s article “A Divorce Lawyer’s Guide to Staying Together” is an interview with James J. Sexton, author of If You’re in My Office, It’s Already Too Late. Sexton says couples come to his office for “big reasons like infidelity or financial improprieties.” But he also says that people fall in love quickly but fall out of love slowly, so there are lots of little things that precede the big reasons.

At one point, Sexton says Facebook is an infidelity-generating machine.  “It’s a huge factor now, and it’s getting worse every day. I can’t remember the last time I had a case where social media was not either a root cause or implicated in some way.” He says, further, that “…Facebook creates these very plausibly deniable reasons for you to be connecting with people emotionally in ways that are toxic to marriages.” So, he’s affirming that sexual fidelity isn’t the only issue.

Indeed, Jenny Block wrote a whole book praising sexually open marriage. In her opinion, sex isn’t the issue so much as the secrecy and deception that usually accompany a sexual liaison with someone other than the spouse.

That philosophy was shared by a high school friend of mine who, in adulthood, was a sexual free spirit. He was very open with his wife, who gave her permission for him to make booty calls and have f*ck buddies. At one point, she helped him write a personal ad seeking a “girlfriend” and interviewed the candidates with him. They had been married 25 years when he died.

So, sometimes couples set their own rules. Ours is a second marriage both for me and for my husband of many, many years. Before marriage, we agreed to two things: if either of us got sexually or emotionally involved with someone else but it didn’t threaten the marriage, don’t tell; and, if the marriage is threatened, for any reason, we would seek counseling before taking any other action. I realized that I felt very married when I stopped tracking our finances separately, calculating my financial status if the marriage ended.

A different version of very married is presented in COUPLES IN THE EMPTY NEST: VERY SEPARATE MARRIED LIVES (susanorfant.com). The thesis is that empty nesters have three choices: learn how to be a couple again, divorce, or stay married but lead very separate lives in terms of friends, activities, etc.

And speaking of those who are not-so-very-married: Hartwell-Walker (above) reports that 41% of first marriages, 60% of second marriages, and 73% of third marriages end in divorce. According to “8 Facts About Love and Marriage in America” (pewresearch.org) although the marriage rate has declined, between 1990 and 2015 the divorce rate among adults ages 50 and older doubled, and among those 65 and older, the divorce rate roughly tripled. Although the Pew report just mentioned found that only 23% of the general population consider legal rights and benefits a very important reason to get married, Sexton (above) emphasizes that marriage is a legal contract, and that few people examine that ahead of time.

Note to writers: know the rights and responsibilities that are included in the marriage contract, because they vary widely by state.

Despite everyone’s best efforts, life can throw all sorts of obstacles in the way of a lifetime of wedded bliss. If one partner develops Alzheimer’s and forgets the marriage entirely, what is the spouse’s obligation or possible response?

If one partner suffers an accident that makes physical affection impossible, is the spouse entitled to seek affection elsewhere? How can a couple keep their marriage healthy and strong if they are separated through geography, incarceration, military deployment, deportation, or some other element out of their control? After two people have been happily married for decades, is the widow/ widower still committed to the marriage when their spouse dies?

Bottom line for writers: there are many potential elements for being very married, but the one absolute is the commitment to remaining married. Consider all the ways you could show your characters’ strong or weak commitment to a marriage/relationship.