Join The Belly Laugh Bounce Around the World:  on January 24 at 1:24 p.m. local time, smile, throw your arms in the air and laugh out loud.

Suggestions for acts and activities can be found at bellylaughday.com.
Why bother? Because laughter is good for your physical and mental health!

According to the Mayo Clinic:
When it comes to relieving stress, more giggles and guffaws are just what the doctor ordered. Here’s why.

[NB: I’ve changed some formatting and left out some bits, but you can fill those in by going to the Mayo Clinic website.]

A good laugh has great short-term effects.  When you start to laugh, it doesn’t just lighten your load mentally, it actually induces physical changes in your body.

Laughter isn’t just a quick pick-me-up, though. It’s also good for you over the long term.

How’s Your Sense of Humor?

Go ahead and give it a try. Turn the corners of your mouth up into a smile and then give a laugh, even if it feels a little forced. Once you’ve had your chuckle, take stock of how you’re feeling. Are your muscles a little less tense? Do you feel more relaxed or buoyant? That’s the natural wonder of laughing at work.

Still not convinced?  Go online and read for yourself!

And while you are at it, better know your laughter!  There are as many words for laughter as there are for types of laughter. Consider the positive and negative connotations of the following: 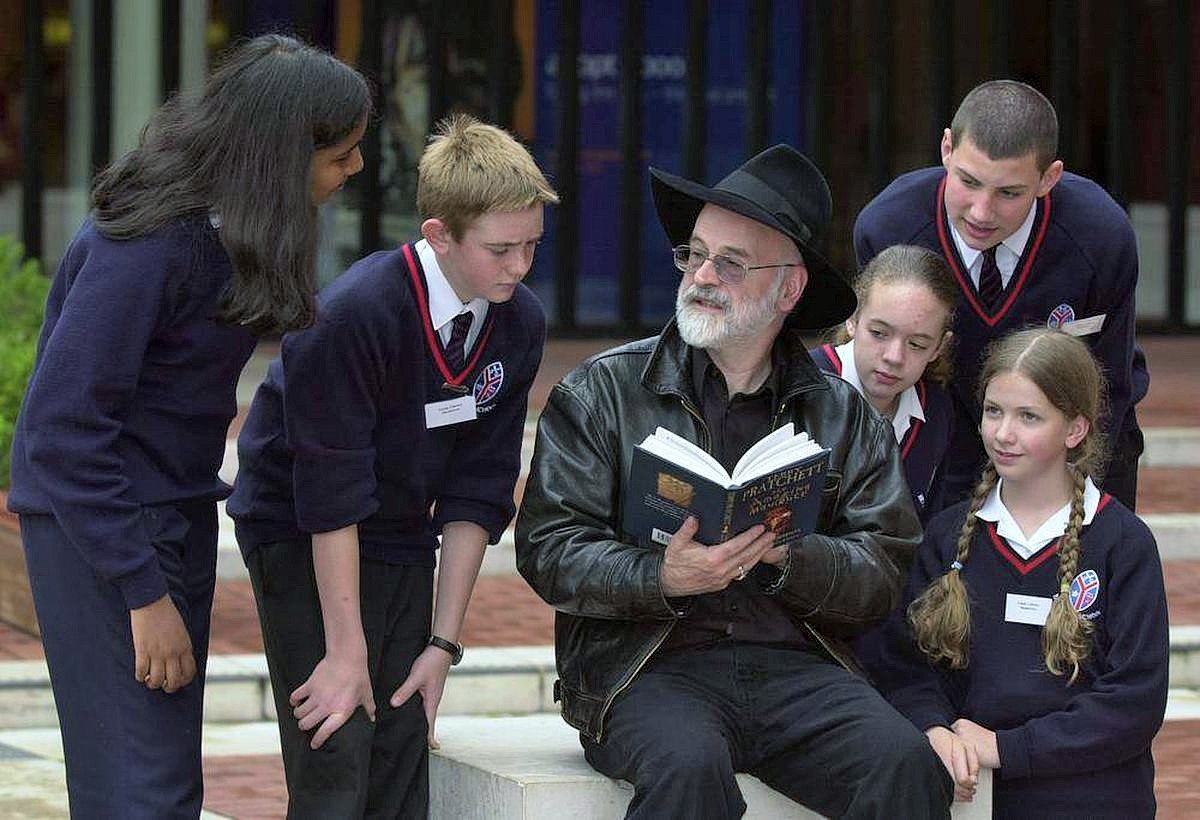 Today’s blog entry was written by Kathleen Corcoran, a local harpist, teacher, writer, editor, favorite auntie, and avid (some might say rabid) fan of everything contributed to the world by the late, great Terry Pratchett.

Sir Terence David John Pratchett, OBE (28 April 1948 – 12th March 2015) was one of the most prolific and popular fantasy and humor authors of all time. His first story was published when he was thirteen years old, and his numerous novels, short stories, and collaborations have since been translated into 37 languages.

Despite leaving school early to work as a journalist, Sir Terry has been awarded honorary doctorates by ten universities. His work has earned him Skylark Awards, Locus Awards, the World Fantasy Award for Lifetime Achievement, the Order of the British Empire, and knighthood from the Queen of England.

Of all the honors and recognitions he earned in his career, Sir Terry always said that the one he was most proud of was The Carnegie Medal given for his young adult novel The Amazing Maurice and His Educated Rodents in 2001.

The panel judging the 2001 Carnegie selection was unanimous. Karen Usher, Chair of the Panel, said, “This is an outstanding work of literary excellence: a brilliant twist on the tale of the Pied Piper that is funny and irreverent, but also dark and subversive. It is a rich multi-layered story with a pacy plot and excellent characterisation. Terry Pratchett uses his trademark wit and humour to question our society’s attitudes and behaviour in a way that is totally accessible for children of 10 years and over.”

The Discworld series, with books about dragons, police, witches, trolls, the postal system, and werewolves, also contains five stories about a young witch in training. Tiffany Aching is an admirable role model for readers of any age, and she has four Locus Awards attached to her book covers.

Pratchett has other worlds less extensively mined, notably the Earth of the early 1990s. Ostensibly he writes about this for younger readers; the adult books have longer words and the juvenile fiction shorter sentences, but they are otherwise interchangeable….

Few authors speak with the same voice to children and grown-ups alike, but Terry Pratchett does. His first novel, The Carpet People, written originally for children, was recently back on the adult bestseller list. In fact, all his children’s books have been on the adult best-seller lists, which must make him unique in publishing annals.

Tiffany Aching is not a Chosen One. She has no special birthmark or secret royal lineage. No one gave her a special quest; no mysterious stranger asked her to guard a magic talisman. And that is part of what makes Tiffany Aching such a relatable character for younger readers.

She chooses to fight her battles because no one else will. She earns her place among the witches by being stubborn and paying attention. Wee Free Men, the first book starring Tiffany, discusses serious issues like the death of her grandmother and class divisions. Anyone can grow up to be a Tiffany Aching.
.

Many of Sir Terry’s books for younger readers touch on this same theme of paying attention to what is happening and dealing with the problem in front of you. Masklin in Truckers and Mau in Nation are faced with tragedies and then go about finding a way to fix them simply because no one else will. In addition to being incredibly fun to read, Sir Terry’s books for younger readers present them with role models for real problem-solving.

Despite the lessons in his children’s books, Sir Terry never preached to his audience. Characters learned by making mistakes, by suffering (sometimes terrible) consequences, by finding another way to accomplish what they needed to accomplish.

In The Bromeliad, the nome Masklin has to convince an entire colony of nomes that they need to pack up and leave behind everything they’ve ever known. The entire world outside their home is a terrifying idea (that may not even be real), and the hero has to create reasonable arguments and persuade his elders that not following him will result in the death of every member of society. Despite the imminent annihilation, the series is funny to read and ultimately leaves the audience with the idea that looking beyond the horizon, listening to others, and working together might not be such a bad idea.

The function of humour is to help us cope with the dark side of life; Terry Pratchett is worth a dozen psychotherapists. David V.Barrett in New Statesman and Society

I have trouble reading Sir Terry’s books to my nieces because they are so good. Bedtime stories take a lot longer to finish when the orator has to keep stopping to laugh. The entire bedtime routine takes longer when the bedtime story leads to a discussion of why no one wanted to help a certain character or why people are mean when there isn’t even a reason!

As the little readers get older and learn to read the longer books, I expect many more questions I’m not really able to answer. Sir Terry discussed religion, death, prejudice, responsibility, and a million other topics I’m sure I’ll be unprepared for.

Sir Terry has provided hours of entertainment to millions of readers around the world. His work has been adapted for theater, for radio, for television and movies, and for all sort of video and board games. Most recently, Good Omens was produced as a mini-series for the BBC. And he was always happy to help other writers, funding scholarships and first novel prizes, and giving numerous interviews about writing.

He was diagnosed with Posterior Cortical Atrophy in 2007 and passed away in March of 2015. The Glorious 25th of May (a reference to the futile Treacle Mine Road Revolution in the novel Nightwatch) has been designated by fans as a day to honor Sir Terry Pratchett’s work and legacy by wearing lilacs and donating to fund Alzheimer’s research. The ripples he caused in the world are not likely to fade away any time soon.