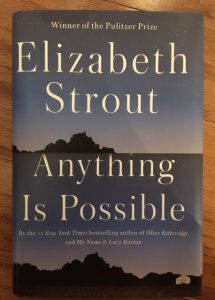 A friend gave me Anything Is Possible for my birthday. At the time, it wasn’t yet published. When it actually arrived, I was reading something else and my husband—a great Strout fan—eagerly enjoyed my present. He just finished, and I interrupted what I was reading and took it up. And as the headline says, it is worth the wait.
This book is another gripping example of linking short stories to form the whole. Remember Olive Kitteridge? It won the Pulizer Prize in 2009, and has since sold over a million copies.
That was my first exposure to Strout. I love that book. It inspired me to put together a collection of my short stories with a working title of Almost Family. Well, my book is still almost, but in the meantime, Strout wrote The Burgess Boys (among other things).
Frankly, although well-written as always, I didn’t like The Burgess Boys so much; it’s much darker than Olive Kitteridge. So far, Anything Is Possible is promising a great read.
It starts with Tommy Guptill, who inherited a dairy farm from his father. The barn and house burned down one night, and Tommy is still haunted by nightmares of the trapped cows. Okay, so that sounds pretty dark. But he moves into town and takes a job as a janitor in the local school and… well, I won’t tell you too much about it. No spoiler alerts here. 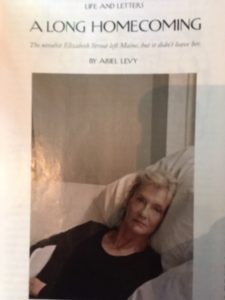 I mentioned recently that The New Yorker of May 1 had an article about Strout by Ariel Levy titled “A Long Homecoming.” The article provides interesting insights about the relationship between the writer and her writing. Her take on Anything Is Possible is “The tone of Strout’s ficton is both cozy and eerie, as comforting and unsettling as a fairy tale.”
I’m taking Anything Is Possible on a road trip this weekend. I’ll check back in when I’ve finished the book!