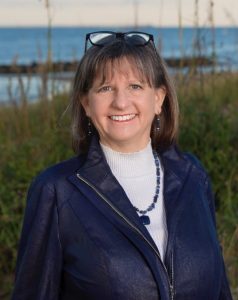 VL: When I invited the four authors who have stories in To Fetch a Thief to contribute something to my blog page—interview, blog, rant, whatever—I was hoping for diversity. And they are coming through!

I’m a writer. I write cozy mysteries. When I’m not huddled in my writing hut, I’m out and about, either physically or cyber-ly, mingling with readers. The number one question I am asked is “Where do you get your ideas?” My answer: I collect “story nuggets” everywhere I go and in everything I do and all the crazy stuff I see in the news. All it takes is a teeny tiny event  and my imagination is off and running. It’s no secret I am particularly influenced by things in my life and events that occur in my coastal community.

For my most recent publication, I was challenged to write a novella (about 15,000 words) that involved a dog, a theft, and a murder. Two years later, a book was born. To Fetch a Thief is a collection of four novellas. My story is titled “It’s a Dog Gone Shame!”

Fortunately, I had a cache of “story nuggets” at the ready. 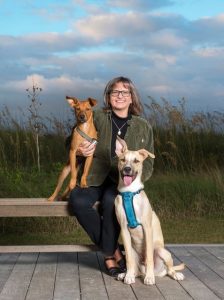 The “dog” part of the story was easy. Although dog-less at the time, we’d been lucky enough to have been adopted by four wonderful rescues over the years. I knew how to write “dog.”

The “theft” part of the story was a snap. We have a wonderful place in our neighborhood to honor dogs that have crossed the rainbow bridge. It’s called The Dog Gone Garden. A local artist paints a colorful rock to represent each dog as it passes. The rocks are huddled under the shade of a Crepe Myrtle tree. Our own Norwegian Elkhound, Jamaica, has a rock there. One summer’s day all of the rocks disappeared! Just gone! Nobody knows where or why or how. (There were a lot of them so it was a heavy load!) Aha! my mystery-writer self said. A theft! I tucked that into my carton of story nuggets. (Although I solve this little mystery in my story, the real rock theft remains on the loose.) 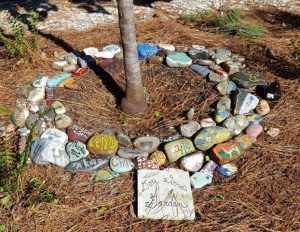 The murder part? We live on the Chesapeake Bay. It is a semi-annual occurrence for a body to wash ashore. Mostly they are traced back to a drug gang further up the bay. Sometimes it’s a result of too much drink and too little sense when a person climbs aboard their trawler to sleep it off. One misstep and they splash in the bay and end up sleeping with the fishes. The beauty of being a cozy writer is the amateur sleuth only has to discover a dead body. We don’t have to know how to kill. Interviewing neighbors who’ve discovered the “floaters” has given me enough “nuggets” for a dozen mysteries.

To answer the perennial question, “Where do you get your ideas?”; I get them from life. Once the “story nugget” is planted, I turn it over to my imagination. I then stand back and watch the words fly! (Most end up on the cutting room floor, but that’s another story for another day.)

VL: Big thank you to Jayne Ormerod! No doubt readers have enjoyed this peek into your writing process—and some may decide to emulate you! To read more about the stories in To Fetch a Thief and the writers who wrote them, check out www.MuttMysteries.com

About Jayne Ormerod:  Jayne Ormerod grew up in a small Ohio town then went on to a small-town Ohio college. Upon earning her degree in accountancy, she became a CIA (that’s not a sexy spy thing, but a Certified Internal Auditor.) She married a naval officer and off they sailed to see the world. After nineteen moves, they, along with their two rescue dogs Tiller and Scout, have settled into a cozy cottage by the sea. Jayne has penned over a dozen novels/novellas/short mysteries.