Skip to content
From April 13 to September 30 the Lewis Ginter Botanical Garden is displaying sculptures by Kevin Box. Each piece begins as a paper-inspired design. His process of turning that paper inspiration into bronze, aluminum, and/or steel requires 35 steps and takes 12 weeks. I read about it in Volume 1, Issue 1 of the new Lewis Ginter Botanical Garden Magazine. Also included in the magazine are five tips from a nature photographer and using natural enemies for pest management, among other articles. 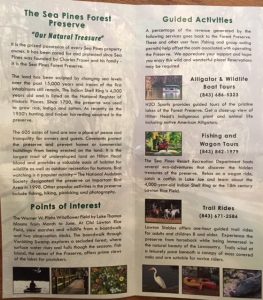 By reading the back of the map of the Sea Pines Forest Preserve I learned that the Indian Shell Ring is 4,000 years old and is listed in the National Register of Historic Places.
And there you have it: I read virtually everything that comes to hand—and usually learn something from it! All last week I was on Hilton Head Island, with a day trip to Savannah, GA, for a tour of hidden gardens. The tour ticket included a “southern tea” at the Green-Meldrim House.

The information card about the house gave all sorts of facts about the history, construction, and ownership of the house. But it also included this bit of information: “…upon the invitation of Mr. Green, General William Tecumseh Sherman used the house as headquarters when the Federal army occupied Savannah during the Civil War. It was at this time (December, 1864) that General Sherman sent his famous telegram to President Lincoln offering him the City of Savannah as a Christmas gift.”  Who knew? Not I—in spite of growing up near Lancaster, Ohio, home of William Tecumseh Sherman, having toured his home, and having written several short stories set during the Civil War.
Not surprisingly, this little freebie contains an article on how tides work—always relevant to sailors—along with the legend of the Jake, the Salty Dog. I had to laugh when I read the 2-page spread on why dogs aren’t allowed at the Salty Dog Cafe these days. 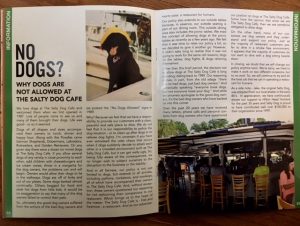 Back in 1987 dogs of all shapes and sizes accompanied their owners to lunch, dinner, and happy hour. That ended when the owners realized that “If you allow several dogs of any variety in close proximity to each other, add children with cheeseburgers and ice cream cones, throw in a margarita for the dog owners, the problems can and will begin.” Duh! The info then went on to give examples. BTW, food at The Salty Dog was excellent. 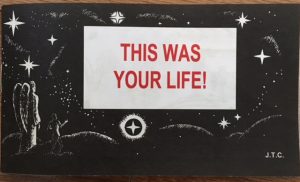 I found this religious tract in a restaurant booth. Even here I found something to enjoy. I read the Bible twice, cover to cover, in my youth and memorized verses at church camp in the summers. Every page of this booklet contains a quote from the Bible, and seeing which verses were attached to which misbehaviors was interesting. 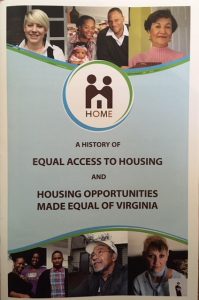 As I recall, this booklet was included with a Virginia Rep play program. I can’t imagine why, so maybe I’m mistaken. But here it is, and very interesting it is, too. Did you know that the first Civil Rights Act was passed in 1866? It gave African-Americans the right to make and enforce contracts, sue and be sued, “give evidence, to inherit, purchase, lease, sell, hold, and convey real and personal property, and to full and equal benefit of all laws and proceedings… as is enjoyed by white citizens.” 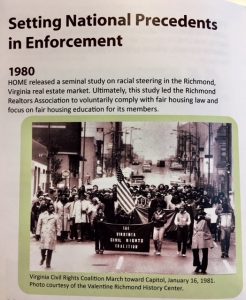 This publication follows the history of housing in Virginia from those earliest days through 2011, and it’s well worth a read. 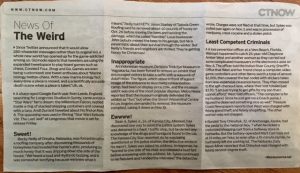 My penchant for reading virtually anything and everything is so well known that one of my daughters sends clippings from her local paper that she thinks might interest me. For example, Sweet is the story of a family whose attic filled with thousands of honeybees, producing so much honey that it dripped down the side of the house. 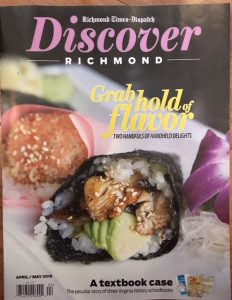 My most recent read is the April/May 2018 issue of Discover Richmond. As usual, there are lots of good things here, but as a former college teacher, I was especially interested in the article “Then and now: new views of old textbook passages.” Virginia history textbooks in use from the mid-1950s into the 1970s presented a view of the past so warped as to be laughable—if it weren’t also so hurtful. For example, “ON SLAVERY—The slave ‘did not work so hard as the average free laborer, since he did not have to worry about losing his job. In fact, the slave enjoyed what we might call comprehensive social security. Generally speaking, his food was plentiful, his clothing adequate, his cabin warm, his health protected and his leisure carefree.”

BOTTOM LINE: Read whatever comes your way and you, too, could know that kites were used during the Civil War to deliver letters and newspapers, that drinking water after eating reduces the acid in your mouth by 61%, that 9 out of every 10 living things live in the ocean, that the University of Alaska spans four time zones, that peanut oil is used for cooking in submarines because it doesn’t smoke unless it’s heated above 450 degrees Fahrenheit…