Skip to content
When my ship comes in. Getting sacked. Raining cats and dogs. Cut the mustard. Knowing the ropes. Our everyday language is full of phrases we use without thinking of how they came to mean what they mean. But let’s cut to the chase here. 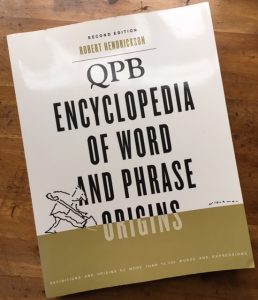 We all know that carouse means to party down, probably with a lot of drinking. But do you know how the word came to be? I didn’t until I read it here. “A ancient Roman goblet used by the Germans was made in the shape of a crouching lion, with the belly as the bowl so that a drinker couldn’t put it down until he finished his wine. This led to the German toast Gar aus!, meaning “Completely out!” or “Drink fully!” when drinkers lifted their goblets. Over the centuries Gar aus eventually became garouse and finally carouse in English, meaning to engage in a drunken revel or to drink deeply and frequently.
When it comes to books about language, one is never enough for me. In the past I’ve mentioned Bill Bryson‘s Mother Tongue: English and How It Got That Way. There are many other books around about the evolution of language. And while I find them good reads, they really aren’t handy references. 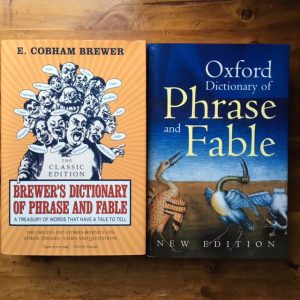 For quick, focused access, look elsewhere. For example, last week I was talking with a friend about how different parts of the country use different words for the same thing, such as bag, sack, or poke. She’d never heard of poke meaning any such thing. That led me to say, “Still common in parts of the south during my childhood. And have you never heard of a pig in a poke?” She hadn’t. And I was unable to explain clearly why that phrase should mean a blind bargain. But Brewer came through for me! “The reference is to a common trick in days gone by of trying to palm off on a greenhorn a cat for a suckling-pig. If he opened the poke or sack he “let the cat out of the bag,” and the trick was disclosed. The French chat en poche (from which the saying may have come) refers to the fact, while our proverb regards the trick. Pocket is diminutive of poke.”
The Oxford book gives similar information, but often in less detail. For example, Dutch uncle is defined as “a person giving firm but benevolent advice; the expression is recorded from the mid 19th century, and may imply only that the person concerned is not an actual relative.” 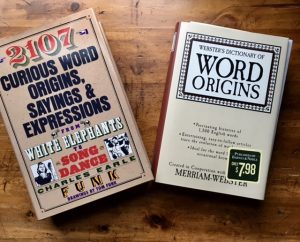 The Funk book is the opposite. Each entry is quite detailed, and a hair of the dog that bit you gets half a page, beginning “This stems from the ancient medical maxim, Like cures Like—Similia similibus curantur,” and goes on the reference the Iliad and trace the phrase over time.
Webster’s Dictionary of Word Origins is much the same, albeit with fewer entries. When it comes to general browsing, these are my favorites! 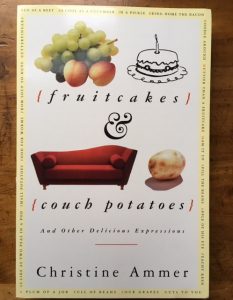 Last but not least, let me mention one of the more specialized references. As the cover promises, Ammer’s book is all about food phrases.
Delve into the origins of words and phrases. You will find amusement as well as information!