Skip to content
A couple of weeks ago, I mentioned that I like having books about places I’ve lived. I was born and reared in Ohio, and now live in Virginia, so those are two of the states I am drawn to. And given that I’m also drawn to the weird. . .
From books like these, you can gain such vital information about Ohio as the location of Crybaby Bridge; abandoned hospitals, prisons, and asylums; and graveyards worthy of a safari. And as for Virginia, you might think Civil War Statues—but what about a statue of a giant Viking, or Johnny Appleseed, or the Auto Muffler King? 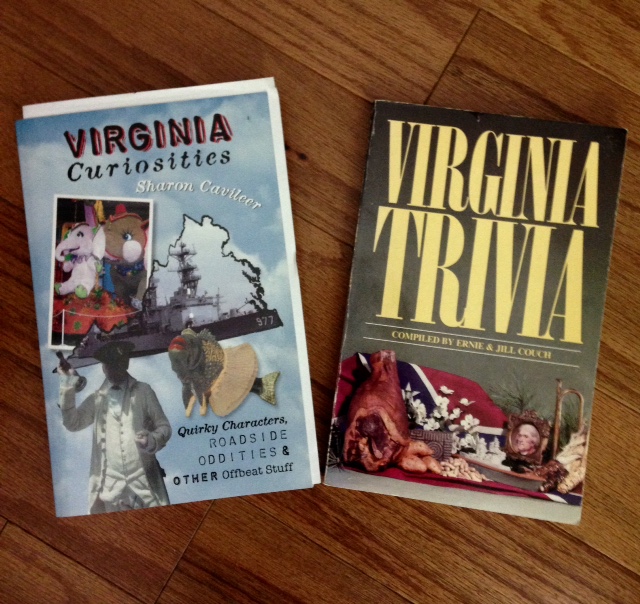 Did you know that the official state drink of Ohio is tomato juice? Or that the 50-star U.S. flag was designed by an Ohio high-schooler? And FYI, the dorm room occupied by Edgar Allan Poe at the University of Virginia is on permanent display. And Secretariat was the first Virginia bred-and-owned horse to win the Triple Crown.
Of course, trivia can come in all forms. I have several books of lists. I like knowing the 6 illegal substances that occur naturally in our bodies, 21 biblical contradictions, and 12 erotic works by well-known writers. (Anne Rice? Piers Anthony?)
If ever evidence was needed that people will compete in anything, just check out weird records: the longest time balancing a Christmas tree on the chin (56,82 seconds), the longest time keeping toe in mouth while hopping on one foot (1min. 49.02 sec.), and the largest grand piano cake (300 lbs, shaped like a baby grand).
And examples could go on. But why? Either you love trivia—and therefore will own these books or others like them—or you won’t. In which case, why are you still reading?

Trivia is interesting, often funny, can serve as a conversational gambit, and you needn’t worry about coming to a good stopping place before going to bed.

Giving your characters off-beat information or obsessions adds interest—and you can enjoy the research!