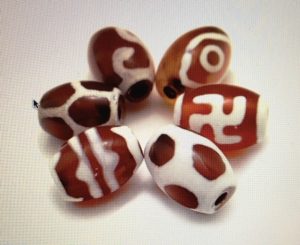 As you may know from previous FB posts and my weekend blog, I recently visited the VMFA during the creation of the Tibetan mandala. As with many special exhibits, the VMFA shop offered many items related to mandalas and Tibetan culture—and thus I became aware of dZi (pronounced Zee) beads for the first time. The Tibetan word “dZi” translates as “shine, brightness, clearness, splendor.” The name in Mandarin Chinese translates as “heaven’s bead” or “heaven’s pearl.” FYI, I’ve seen it written Dzi as well. 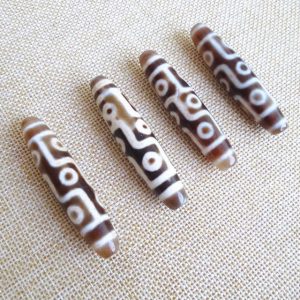 The dZi are stone beads worn as part of a necklace or bracelet. Many Asian cultures around Tibet also prize dZi as protective amulets and for positive spiritual benefits. As with many things thought to have good vibes, dZi have and have had multiple uses: ground into powder, they are sometimes used as an ingredient in traditional medicine, and sometimes used as a tool to burnish the gilt on paintings or statuary. 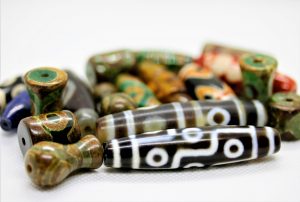 The most highly prized dZi beads are ancient, and made of smooth, natural agate. Those being hard to come by, modern-made dZi are even making inroads in Tibet. The designs can be almost anything: circles, ovals, squares, waves, zig zags, stripes, lines, diamonds, dots, etc. The colors are mainly brown to black with a design in off-white. The number of “eyes” in a design is significant, as is their arrangement. 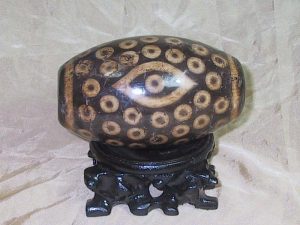 DZi stones appeared between 2000 and 1000 BCE. Although the geographic origin is unknown, they are now generally known as Tibetan beads. In Tibetan culture these beads are believed to attract protectors, maybe beneficial ghosts or ancestors. Thus the beads are always treated with respect.
As long ago as the early 19th century, “modern era” beads in this style were made in Germany. New dZi have been produced in Asia. The most convincing replicas of ancient beads came from Taiwan during the 1990s, and  good-quality ones from mainland China over the last three year. 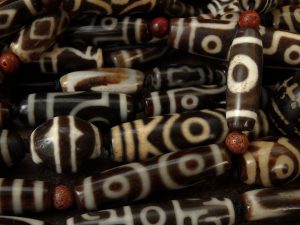 New beads are less likely to appeal to purists. However, attitudes toward new beads vary widely: some believe the new stones function as well as the old ones; some believe the protective energies are missing but can move into a new dZi under certain circumstances; at the same time, the ancient beads have absorbed energy—both good and bad—from all the previous owners whereas these new beads have no need to be cleansed in the same way. In any case, one should purify one’s beads and ask them to bond with you. There is an interesting and informative article online titled the Myth and Mystery of Tibetan Dzi Stone Beads that tells how to do this, and how to care for your beads in general. It also identifies the meaning attached to the number of eyes on the bead, from one to twenty-one.
Imitation dZi are made from materials other than agate or calcedony—virtually any other material. Some of these imitations were created a couple of hundred years ago. Some of the older mock dZi are valued in their own right. The dZi beads available in the VMFA shop are made of traditional materials (agate) and designs, but they are obviously mass-prodced and thus some would consider them to be imitations. 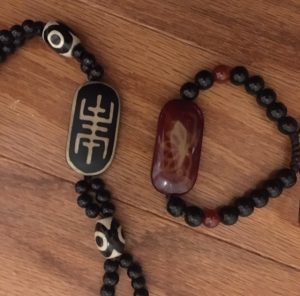 If one believes in the power of stones, these would still have the positive properties of these varieties of quartz. Agate and chalcedony are two commonly-encountered varieties of quartz.
Agate: all about harmony and balance. Although different varieties/colors of agate have their own properties, all types of agate stones have these agate properties at the heart of their meaning. All agate mineral rocks vibrate or resonate at a slower, less intense rate than some of their more high-frequency quartz relatives. These less intense vibrations impart strength and stability. Agate meaning includes yin and yang energy, providing a balance between the positive and negative. 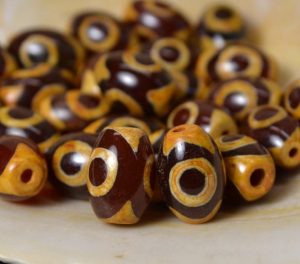 Carnelian is known as a stone of motivation and endurance, leadership and courage. Carnelians have protected and inspired throughout history. A glassy, translucent stone, Carnelian is an orange-colored variety of Chalcedony, a mineral of the Quartz family.
Chalcedony is a nurturing stone that promotes brotherhood and good will. It absorbs negative energy. It brings the mind, body, emotions and spirit into harmony. Chalcedony instills feelings of benevolence and generosity. It alleviates hostility and transforms melancholy into joy. 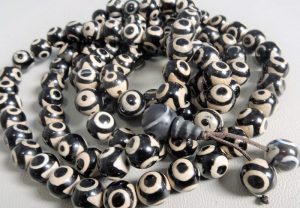 Black Onyx is another variety of Chalcedony, which ranges from white-colored stones to black. It is one of the many gemstones believed to have amazing healing and spiritual properties. The story of the origin of this stone varies from culture to culture, but it does go back a very long way in time. Today it is available in pure black, as it is heated and polished.
BOTTOM LINE: Get thee to the VMFA, enjoy the exhibit, and learn a bit about Tibetan culture. You never know what information a writer can use down the line!