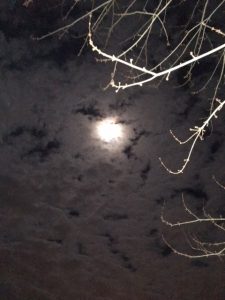 It wasn’t a dark and stormy night, but a week ago tonight was perfect for murder. For the second year, Sisters in Crime/Central Virginia worked with Clover Hill Library for their Friends of the Library fundraiser, Murder at the Library. 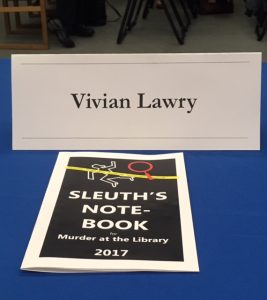 I can’t rave too much about this event. It was very well organized. For one thing, they provided a sleuth’s notebook that included photos and thumbnail sketches of the potential suspects. In addition, it contained the program, author photos, and bios.
The skit ended with the discovery of the body.
Then attendees mingled with the suspects, asking questions, gathering more info. Here you see me taking with the Branch Manager who had “borrowed” money from library funds to pay for her expensive red scarf. This would be the same scarf found near the body. 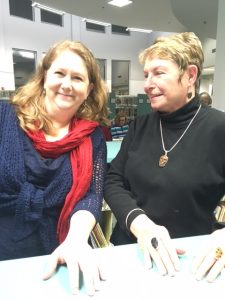 Then there were the lecherous president of the Friends of the Library rejected by the victim and the library gossip who knew the victim since college and held a grudge. 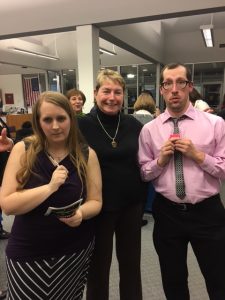 This famous children’s singer  was the victim’s lover and an all around not-so-nice guy. Jeanette was grumpy because she hated change, and expected to get her old job back now that the librarian who had replaced her was dead.

And let’s not forget those not pictured! Pokemon Go Guy, two boozing mom’s on Xanax and wine, the singer’s sister, and Detective Nancy Drew who called on those present to help find the person who had motive, means, and opportunity.
Votes were cast by tossing legos into the labeled bin of the suspect one favored, and reasons were given for the suspicions. I’m proud to say, I was right! (And no, I won’t name the killer.) 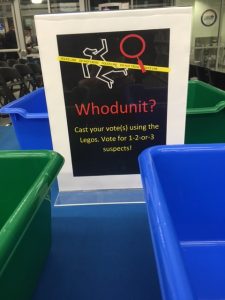 Several of the authors presented a discussion of the sub-genre’s of mysteries: Mary Miley, Maggie King, Heather Weidner, Tina Glasneck, Fiona Quinn, and LynDee Walker. Rosemary Shomaker and I facilitated the sleuthing.
Besides the pleasure of all the murder and mayhem, a ticket to this event allowed attendees to have heavy hors d’ oeuvres, beer, wine, and soft drinks. Watch for notices of the event next year and to be sure you don’t miss it, get your tickets early! 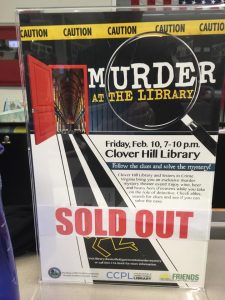 Murder at the Library

It is your chance to be the detective in the latest mystery!

Examine the crime scene, follow the clues and solve the mystery! You’re the detective in this interactive mystery night, with a script written by Sisters in Crime.

Mystery writers from the Sisters in Crime will take you behind-the-scenes with an author talk, book sale and signing.

Check out what is in the silent auction. Tickets and silent auction will benefit the Friends of the Chesterfield County Public Library.

Tickets are $25 ($40 per couple) and include two drinks and heavy hors-d’oeuvres. You can purchase tickets here.