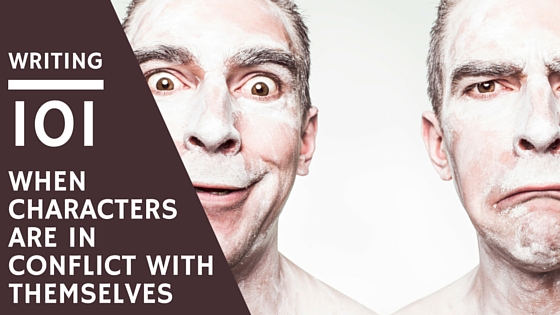 The basis of conflict and tension are obvious when two (or more) characters are competing for the same goal, such as a promotion, or when a character is beset by physical danger such as a life-threatening cancer or an approaching hurricane. A threat of any sort to the character or to someone (or something) the character cares about is an excellent source of conflict and tension. But using internal conflicts can add just as much power to your plot.

You can’t have your cake and eat it, too = approach-approach conflict

The character has multiple appealing options but can take only one—e.g., two marriage proposals, only one dessert from a tray of twelve, only one new car, etc. This type of conflict creates the least tension because there is no real downside. It’s all good.

Will the character get back surgery or live with the pain? Wash the car or rake leaves? Stay in an unhappy marriage or get a divorce? The reader may feel more sympathy than tension. The level of tension depends partly on the pain the character suffers while weighing the alternatives, and partly on how bad the options are. For example, Sophie’s Choice: to save herself and one child at the price of choosing to send one child to the gas chamber, or refuse to choose and sentence all three of them to death.

Take the bitter with the sweet = an approach-avoidance conflict: one goal with both positive and negative aspects, ultimately resolved in favor of the stronger

Virtually all relationships as well as many other aspects of life fall into this category. One factor affecting the amount of conflict or tension is how nearly the positive and negative aspects are matched (the closer they are in strength, the greater the tension). If an otherwise perfect spouse has one annoying habit, probably no big deal, the marriage is solid; if a buyer is drawn to a white picket fence but the house is practically falling down and overpriced, no-sale is a pretty safe bet. But if a deeply flawed spouse has nearly as many annoying habits as good ones—if the house is in a perfect location with a great school district and enough yard for the seven dogs—it could be a game changer. Comparable positives and negatives will create lots of tension.

A second factor is how important the ultimate outcome is. If I want a Ph.D. to qualify for a college professorship but don’t want to spend the time, effort, and money to go for it—not to mention the risk of failure—big decision, lots of tension potential. If I want a bag of chips from the vending machine but think $2 is an outrageous price—not much tension.

Love is always a high-voltage relationship, so let’s consider the special instances of approach-avoidance conflicts reflected in absence makes the heart grow fonder; out of sight, out of mind; and can’t live with ’em, can’t live without ’em.

Absence makes the heart go fonder when, with distance, the negative qualities or aspects of the date/lover/spouse exert less influence and the push-away diminishes; the person doesn’t seem so bad. If you aren’t actually hearing the obnoxious laugh, smelling the bad breath, or arguing about politics, the heart grows fonder—though maybe not fond enough to renew the relationship.

Out of sight, out of mind is the opposite: positive value diminishes with distance until the original attraction may have no more pull at all. The sweet kisses don’t mean so much when you aren’t getting any! Ditto sense of humor, help with chores, being a good listener. This is often the source of the “Dear John” letters received by people in the military, in prison, in college far away, etc.

The point where the valences cross is the point of vacillation: closer, and the relationship is so negative that one or both parties withdraw. With greater distance, the positive stays strong longer than the negative and the couple gets back together. These yo-yo relationships can go on for years. This could happen with any type of relationship—playmates to spouses. Whole books have been written by and about couples who marry, divorce, and remarry.

Good writers need to be good psychologists whether or not they ever studied the discipline or use the lingo, just be sure the positives and the negatives are believable for the character and appropriate to the conflict.

Characters in conflict within themselves can provide plenty of page-turner tension!

Writing Relationships: Why Not Get the Hell Out of Dodge?