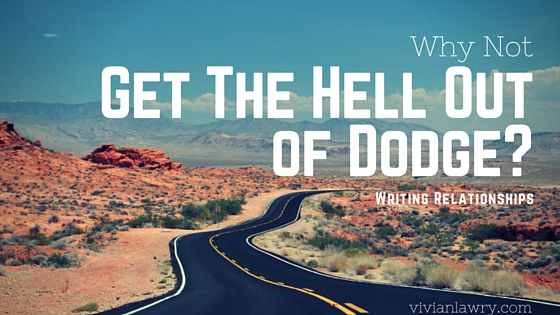 In recent blogs, I talked about toxic mother-daughter relationships, toxic relationships in general, and toxic people.Toxic anything is good for writers! But once you’ve introduced these negative relationships and people, you cannot—satisfactorily—leave your reader wondering why s/he puts up with that. After all, there are planes, trains, and automobiles—not to mention boots that are made for walking!
Even if your characters don’t recognize their motives, you—their almighty creator—should know what they are AND should let the reader know.
So, why does s/he put up with it? The short answer is, it’s the best perceived alternative! People are very rational creatures, and they always make that choice. The complexity here is in the word perceived. Not everyone sees a situation the same way.
For example, the objective reality might be that a battered woman would be better off out of that marriage. But if she doesn’t see that, it ain’t gonna happen. So consider what her point of view might be. Suppose she came from a family with spousal abuse and accepts it as part of the package. Perhaps she fears for her life, or the safety of her children, if she leaves and he finds her. What if he threatened to commit suicide if she leaves and she couldn’t stand the guilt? Maybe she thinks it’s her fault—and/or, her self-esteem is so low that she thinks she deserves it. Maybe she doesn’t see a way to keep a roof over her/their children’s heads and food on the table single. Perhaps she loves him and lets him beat her because for his own twisted reasons, he needs to do so. Perhaps leaving/divorce goes against her religious beliefs. Etc. All of these reflect beliefs or values not universally held—and beliefs or values not universally held often apply to perceptions about leaving a toxic situation or relationship.
Additionally, consider the legal constraints on minors, military personnel, prisoners, employees, etc.
Perhaps your character is highly motivated to avoid conflict, criticism, gossip, embarrassment, rejection by family or peers—or even fears the unknown.

Show the reader your character’s perspective.