I was sitting in my recliner, much as I am now, sipping iced decaff coffee and leafing through catalogues from discount booksellers. (My favorites among these are Edward R. Hamilton Bookseller and Daedalus Books.)

After ordering more books than I have shelf-space for—about half cookbooks for a vegan kitchen and half books I think will be useful writing references, such as Funerals to Die For—my thoughts drifted, as they are wont to do. I’ve been collecting cookbooks since long before I started writing fiction. Over the years, I’ve donated and gifted hundreds of cookbooks and mysteries. Even bookcases in every room of the house except the bathroom weren’t enough!

As best I can remember, my first connection between fiction and food was the Rex Stout mystery series featuring Nero Wolf. I’ve had the The Nero Wolf Cook Book so long I can’t remember.

I became enamored with Sherlock Holmes in college. But Dorothy L. Sayers is probably my all-time favorite mystery writer. She didn’t make a big deal about food in her Lord Peter Wimsey/Harriet Vane books. Still, I had to have The Lord Peter Wimsey Cookbook.

More than one mystery has taken up a food theme. Perhaps the best known is Diane Mott Davidson. She’s written 17 novels featuring Goldy Schulz, a small town caterer who solves mysteries on the sides. Goldy Schulz also has a cookbook, although I haven’t seen it.

Of course, food isn’t solely the purview of mystery writers. See for yourself. 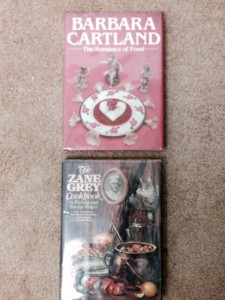 And the options are never-ending. Consider A Feast of Words, for Lovers of Food & Fiction by Anna Shapiro. It includes excerpts from 25 novels, from Jane Austen to Alice Munro. Shapiro comments on the food scenes and includes her own menus and recipes inspired by each work. Eat Memory: Great Writers at the Table, edited by Amanda Hesser comes from her work as the New York Times Magazine‘s food editor. In this book she presents 26 food memories from leading writers, and the recipes they involve.

If you are more into the words than the food, consider this slim volume: Food Tales: A Literary Menu of Mouthwatering Masterpieces. It presents 8 stories, including “A Vicomte’s Breakfast” by Alexandre Dumas, “The Luncheon” by W. Somerset Maugham, and “Tortillas and Beans” by John Steinbeck.

Once you start on writing and food, it’s a short step to food writers. One of my favorites is M.F.K. Fisher, How to Cook a Wolf. She wrote it in 1942, the point being to cooking during the WWII food rationing.

But enough! There must be an end somewhere!

Your Links Between Food and Fiction

What are your favorite cookbooks?

Don’t collect cookbooks? Do you have a collection that’s taking up your house?