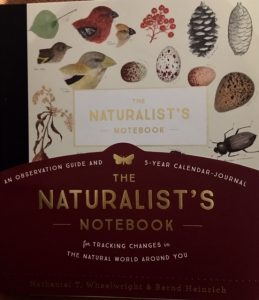 Keeping a nature diary has spotlighted how often I look for and at birds. Bird feeders just outside my kitchen provide many opportunities as I eat breakfast or lunch. Until now, my focus was mostly on beauty, dominance, and learning the names of the locals. 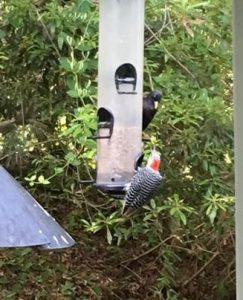 Now, it seems I have a very narrow window on birds of the world: there are approximately 10,000 different species worldwide! They have a few things in common, however: they have feathers, wings, lay eggs, and are warm-blooded. They are thought to have evolved from theropod dinosaurs. They have hollow bones which help (most of them) to fly. (Kiwis are an exception. They are flightless. And, FYI, they lay the largest eggs relative to their body size.)
About 20% of bird species migrate long distances every year. And birds have the same five senses as humans: sight, hearing, touch, taste, and smell.
But amid these commonalities are enormous variations.
Sight: birds use sight for flight, evading predators, and finding food. They are especially good in perceiving motion and detail—2 to 3 times better than humans. Those with more widely positioned eyes have a wider field of vision, including being able to see directly behind themselves. (Think evading predators and evading attacks.) They have an inner eye membrane to help protect their eyes and clean them often. During flight they often spread their wings to protect their eyes, and when attacking they go for the eyes of their adversary. The owl, famously, has to turn its whole head to see. 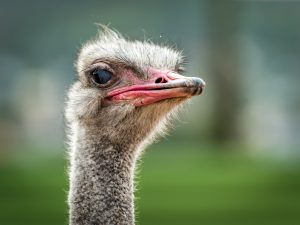 The ostrich is the largest bird in the world, and they have the largest eyes of any land animal. They are approximately the size of billiard balls, and are actually bigger than their brains. Also, FYI, ostrich eggs are the biggest and they have the fastest maximum running speed (97 kph, just over 60 mph).
But in spite of eye size, other birds (e.g., murres) have been shown to see, and recognize, it’s partner several hundred meters away out at sea. 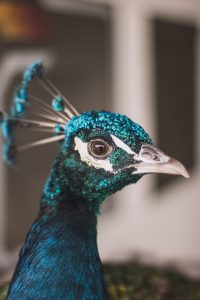 Compared to mammals, birds have relatively large eyes. In general, bigger eye means better vision. In fact, bird eyes are bigger than they look, because all but the pupil is covered with skin and feathers.
Diurnal birds that become active at dawn have larger eyes than birds that become active later after sunrise. Nocturnal birds (with the exception of kiwis) have relatively larger eyes.
People have three types of photoreceptors in the retina: red, green, and blue. Birds have these AND ultraviolet—which they use to find food as well as partners. 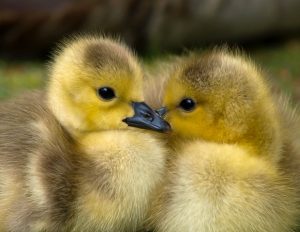 Birds use their right and left eyes for different tasks. Domestic chicks use their left eye to approach their parent. Male black-winged stilts are more likely to direct courtship displays toward females seen with their left eyes. When peregrine falcons hung, they rely mainly on their right eye. New Caledonian crows show individual preferences for one eye or the other when constructing tools or prying prey out of crevices. The stronger the preference for one side is, the better the bird is at problem solving, foraging, etc.
So far it is know that songbirds, ducks, falcons, and gulls can sleep with one eye open. A study of mallard ducks showed that those sleeping in the center of a group were more likely to have both eyes closed, whereas those on the edge were more likely to keep the eye facing outward from the group open.
There is also evidence that birds can sleep on the fly, e.g., swifts and glaucous-winged gulls.
Hearing is the second most important sense. Their ears are located behind and below the eyes and are covered with soft feathers for protection. The ears are funnel shaped to focus sound. Here again, owls are special. Their face plates (facial discs) help direct sound. Surprisingly, so called “ear tufts” of owls and other birds have nothing to do with hearing. 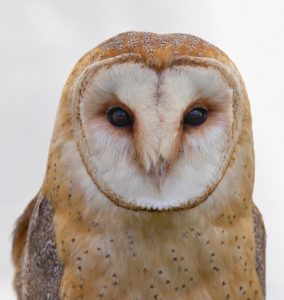 Birds’ hearing is much more acute than humans  for sound recognition, though with a smaller frequency range than humans. They are especially sensitive to pitch, tone, and rhythm changes. They use this sense to recognize other individual birds, even in flocks. Birds use different sounds, songs, and calls in different situations to identify predators, mark a territory, or offer to share food. FYI: owls simply devour small prey whole (think insects, mice, etc.) and regurgitate indigestible bits like bones and fur.
Bats and oilbirds (and perhaps others I haven’t read about) use echolocation. Bouncing chirps and clicks off solid objects is used to navigate through dark caves.
Touch is more important to people than to birds. Even so, birds are very sensitive to changes in air temperature, pressure, and wind speed, changes which are transferred down the feather to nerves in the skin. Some have special feathers around their bills that seem to serve a purpose when feeding. 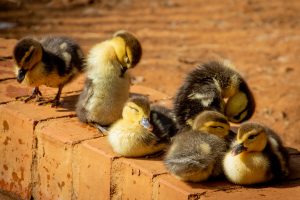 Mutual preening—which involves manipulating one another’s feathers—is important in courtship for many bird species. On the other hand, they have fewer nerves in their legs and feet, which makes them less sensitive to extreme cold. Shore birds have extremely sensitive touch receptors in their bills, aiding them when feeding through mud, water, etc.
Taste is not well defined in birds. Depending on the species, they have fewer than 50 or as many as 500 taste buds, compared to 9,000-10,000 in humans. Birds can taste sweet, sour, and bitter, and can identify suitable and most nutritious food sources—but this is less important than sight and hearing. For those of us who hope to discourage squirrels and raccoons from a particular food source, birds are impervious to spicy-hot, as in cayenne pepper infused birdseed. 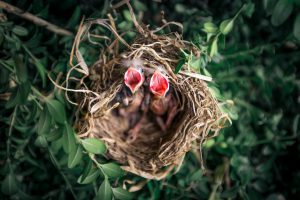 Smell is the least developed bird sense. They have small olfactory centers in their brains. Therefore, some claim this debunks the myth that nesting birds will reject a fledgling that has been handled by humans. In fact, songbirds cannot detect the human scent. 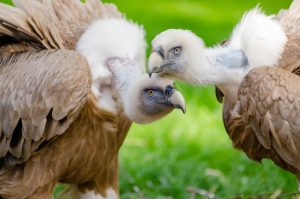 That generality aside, vultures, kiwis, honeyguides, albatrosses, petrels, and shearwaters all use keen senses of smell to locate food, often from treat distances or when the odor is not noticeable to humans.
And now to some interesting (to me) facts about birds. 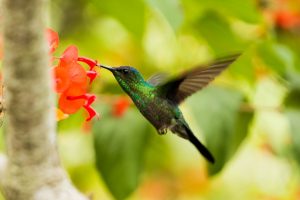 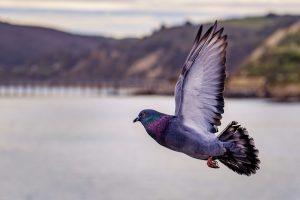 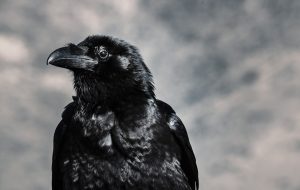 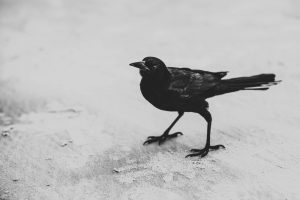 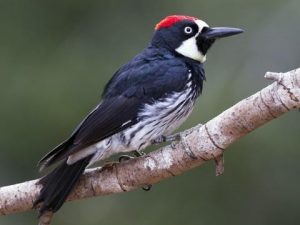 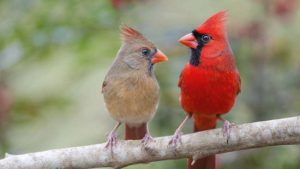 One bird I especially like is the northern cardinal. It’s one of the most popular birds in the U.S. Indeed, the cardinal is the state bird for seven states: Ohio, Virginia, West Virginia, Kentucky, Indiana, Illinois, and North Carolina.
Although male cardinals are brighter, females have more elaborate songs. One cardinal may have more than two dozen song variations. Both sexes sing, and sing year round.
Cardinals are territorial—the territory defended against competitors by the male—and are noted for trying to fight their reflections in mirrors, windows, and other reflective surfaces. Cardinals are monogamous while together, and may mate for life.
They eat various seeds, fruits, berries, grains, and insects depending on what’s available. 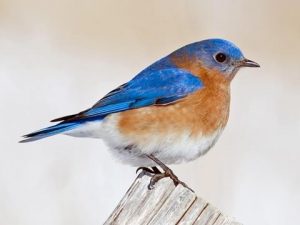 Another favorite is the bluebird.  They can be found throughout North America, including my back yard. Bluebirds, too, are monogamous throughout a breeding season, and may breed together for more than one season. Also like cardinals, they are territorial. The male tends to defend the outer territory while the females defend the nest.
A bluebird can spot caterpillars and insects in tall grass at a distance over 50 yards. They especially like live mealworms.
In my experience, bluebirds tend to come to the feeder in pairs—sometimes more than two pairs at a time. I think of them as family birds.
My backyard aviary is alive with goldfinches, purple finches, titmice, mourning doves, robins, grackles, starlings, house finches, and sometimes mocking birds, hummingbirds, crows or hawks. Right now, I know less about many of these birds. Sufficient unto the morrow. 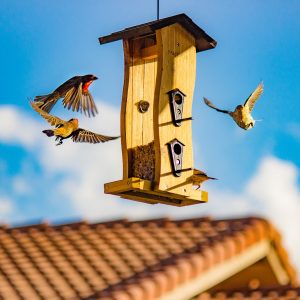 Bottom line for writers: Nature writing can enhance any genre. Consider bird details for your next story.