When my interest is piqued, of course I turn to research. A friend told me that the gift shop at Lewis Ginter Botanical Gardens has two books on the history of bicycle racing in Richmond. True confession: I did not buy them—but you might want to. In the meantime, I did go on-line. As usual, Wikipedia has a lengthy article on the history of the bicycle. You might also be interested in visiting the Smithsonian Institute website, for their series America on the Move. These include pictures. Also, A Pictorial History of the Evolution of the Bicycle has great pictures

I’ll share with you some of what I learned. First of all, the immediate ancestor of the bicycle was the Draisine, also called a Velocipede, Hobby Horse or Swift-Walker. It was designed by Baron von Drais in 1817 and looked like a bicycle, but had no pedals. So one moved by walking along, feet on the ground, while seated. It was made of wood, with iron bound wheels, and weighed nearly 50 pounds. Even so, speeds of eight miles per hour were feasible.

Although a two-wheeled bicycle with pedals may have been created as early as 1839, Pierre Lallement filed the earliest and only patent for a pedal-driven bicycle, in the US in 1866.

Soon after, in 1869, a pedal-bicycle was invented for ladies.

A subsequent major development, the Ordinary or high-wheeler was first made abroad in 1869, and in the U.S in 1877. Depending on the length of the rider’s inner leg, the front wheel could have a diameter up to 5 feet! It was light-weight, fast, and dangerous. Because the rider’s weight was so high and so far forward, a bad patch in the road could cause the rider to “take a header” over the handlebars. The rider couldn’t fall free of the machine because his legs would be trapped under the handlebars. Broken wrists were common. And of course, death was possible. Women’s clothing as well as the social norms of the day made this “ordinary” bicycle unsuitable for women. Cycling became associated with reckless young men. Cycling clubs and races blossomed. 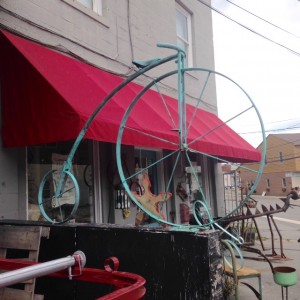 The next major development came in 1885, when John Kemp Starley created—but never patented—the first successful “safety bicycle.” His improvements included a steerable front wheel, wheels of equal size, and a chain drive to the rear wheel. Bicycles became very popular for both work (commuting, deliveries, etc.) and pleasure uses. In 1895, Chicago put its mailmen on bicycles. The safety bicycle was the first bicycle suitable for women.

As far as I’m concerned, developments since then are all just tweaking! As the automobile became the preferred mode of individual transportation in the US, bicycles have been taken over for pleasure and exercise. As of the 1970s, cycling was the nation’s leading outdoor recreation. Still, bicycle messengers flourish in major US cities. In other parts of the world, the bicycle is still the “workhorse” of preference. In the People’s Republic of China, the Flying Pigeon was the government approved form of transportation, considered essential for every household, along with a sewing machine and a watch. In the 1970s, the post-Mao leader Deng Xiaoping defined prosperity as “a Flying Pigeon in every household”—which reminds me that in the presidential campaign of 1928, a circular published by the Republican Party claimed that if Herbert Hoover won there would be a chicken in every pot. A lucky duck. True confession: my mind works in mysterious ways.

And that seems as good a place as any to end this!

The Road World Championships (Worlds) is cycling’s pinnacle event, held annually in an international city as chosen by the Union Cycliste Internationale (UCI) through a competitive bidding process similar to the Olympic Games.

Worlds is a nine-day event, featuring 12 Championship races for Elite Men and Women, Under 23 Men and Junior Men and Women. It is a rare opportunity for the athletes to compete for their country, just as they do during the Olympic Games.