Skip to content
On several dimensions important to me—and to most writers—Ursula Le Guin has excelled almost beyond comprehension. One thing I admire, which doesn’t fit into any particular category, is that Le Guin’s writing is a spiral rather than a line, i.e., she didn’t write one way and then move on to another, never looking back. When you examine the list of her publications at the end of this blog, you’ll see that in any given year, she was writing in several directions, and in later years she circled back to earlier series.

Although best known for science fiction and fantasy, over a writing career that spanned more than half a century, she wrote all sorts of things for all sorts of readers, across genres and formats. Her first publication was a poem, “Folksong from the Montayna Province,” in 1959. She continued to write poetry over the decades, but she would never have labeled herself a poet. The New York Times (2016) called her “America’s greatest living science fiction writer,” but she preferred to be known as a novelist.
Besides poetry, science fiction, and fantasy, she wrote children’s books, short stories, literary fiction, non-fiction, literary criticism, and blogs. Among her non-fiction writings are books of advice for writers, which grew out of her work as an editor and teacher (at Tulane, Bennington, and Stanford, among others), the best known of which is Steering the Craft. BTW, within the last nine months, this guide has been recommended to me by two separate and independent writing teachers.

Writing during years when what was socially accepted was evolving, her fiction often depicted alternatives seldom spoken of regarding gender options and alternatives, religion, race, sexuality, politics, the natural environment, and culture. Perhaps this was the legacy of having an anthropologist father and a mother trained in psychology who later turned to writing. According to Wikipedia, her writing contains many recurring themes and ideas: the archetypal journey, cultural contact, communication, the search for identity, and reconciling opposing forces. This is as I remembered her fiction from years ago. I think it’s about time to revisit Le Guin!
Her novel The Left Hand of Darkness (1969) has been called her first contribution to feminism. Le Guin created, for example, a planet where humans have no fixed sex. Her work brings to the foreground on an ongoing basis equality, coming-of-age, and death.
What I call her “sociological/cultural” approach is what appealed to me, as opposed to sci-fi/fantasy that depends on technology, genetic modification, mind control, robots, and similar machines of domination.

Overall Achievement
Le Guin graduated Phi Beta Kappa from Radcliffe and was awarded three Fulbrights. In 2002 the U.S. Library of Congress made Le Guin a Living Legend in the “Writers and Artists” category.
Awards for Specific Works 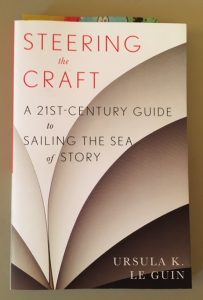