Skip to content
FUNNY WRITING : I don’t do that. It isn’t for lack of interest; it just doesn’t come naturally to me. I have sometimes written things that make people smile, and several of those short pieces appear in Different Drummer. But when writing those things, humor wasn’t my goal. On the other hand, I definitely chose the cover for smiles! 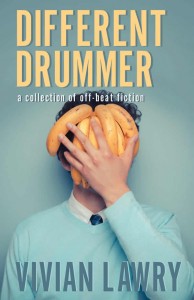 That said, I do like to laugh. And it’s a scientific fact that you can’t get ulcers while laughing. So for the sake of your physical and mental health, write funny if you can. And if you can’t, read some of the following.
My all-time favorite humorist is James Thurber—and not just because he lived and worked in Columbus, Ohio. Not only does he write funny, he draws funny! His stories, illustrated with his own cartoons, appeared dozens of times in The New Yorker. If I had to choose just one book of his, it would be The Thurber Carnival.
For one thing, it includes selections from several of his other books, as well as some previously unpublished stories. It begins with a third-person bio which Thurber wrote about himself. Even his titles make me smile, e.g., “Are You the Young Man Who Bit My Daughter?” and “Darling, I Seem to Have This Rabbit.” But really, snap up any Thurber you happen to come across.
I tend to like collections of humor writing. For example, Sand in My Bra and Other Misadventures, edited by Jennifer L. Leo, contains stories by Anne Lamott, Ellen DeGeneres, and others.
Two great classic collections are Fierce Pajamas: An Anthology of Humor Writing from The New Yorker, edited by David Remick and Henry Finder, and An Encyclopedia of Modern American Humor, edited by Bennet Cerf. Both include dozens of time-tested stories.
I also enjoy a number of writers who have assembled entire books of their own work. P.S. Wall’s My Love Is Free . . .But the Rest of Me Don’t Come Cheap comes to mind, as does David Sedaris, Dress Your Family in Corduroy and Denim, and Erma Bombeck, All I Knew About Animal Behavior I learned in Loehmann’s Dressing Room.
Then there are the humor books targeted to specific groups of readers. The Primal Whimper (Glenn C. Ellenbogen, Ed.) a collection of made-up research that pokes fun at psychologists and psychiatrists. I like What Dr. Spock Didn’t Tell Us: A Survival Kit For Parents (B.M. Atkinson, Jr., with Whitney Darrow, Jr.). I recently found four copies on Amazon to gift to the “children” of friends who are now parents themselves. Maybe part of the reason I like it so much is that the drawings remind me of Thurber!
Perhaps the greatest admiration should go to people who can write entire novels that make us laugh. I’m thinking particularly of Henry Fielding’s Tom Jones.
Also remember P.G. Wodehouse and Steven Leacock. And who could forget Mark Twain? The Adventures of Tom Sawyer and The Adventures of Huckleberry Finn.  But consider the slim volume The Jumping Frog. It pokes fun at literature in translation!
And where do I fit in Peg Bracken? Most well-known for The I Hate To Cook Book, she is just as funny in But I Wouldn’t Have Missed It For the World.
But we mustn’t limit our laughs to books written primarily for humor. Think Jane Austen and Mary Roach.

Take your laughs where you can find them.

Good humor writing is timeless.
What books make you laugh? Tell me in the comments below, on Facebook, or Twitter.