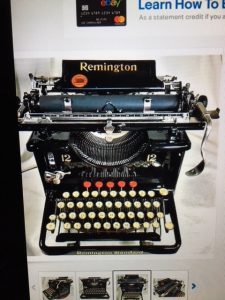 I recently wrote about smart phones as writing tools. Today I’m writing about tools at the other end of the spectrum.
In my high school, Mrs. Echard taught all typing and shorthand classes. College-bound students were guided toward the Personal Typing class. It was the only class that was regularly half male! In this class, one learned to write personal and business letters, but also to compose at the typewriter.
I can see her now—brown hair, brown skirt-suit and heels, white blouse—modeling proper business attire. And I can hear her saying, “Always write your first draft at the typewriter. Triple space it, so you have room to edit and add notes. Don’t worry about typing errors, given that it’s only a draft. No matter how slowly you type, it is still faster than hand writing.” 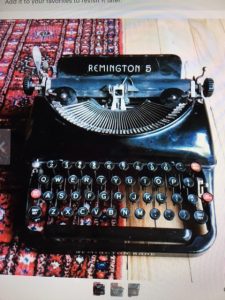 So there we sat, at individual oak desks in even rows, in good typing posture (i.e., feet flat on the floor). A Remington manual typewriter sat centered on the desk, stacks of paper and carbons off to the sides. Two of these typewriters would have been on the ark, had Noah taken objects.
All were black with gold lettered Remington on the front. The ribbon spooled from left to right, black on top and red on the bottom. Changing said ribbons was a messy, bumbling business. 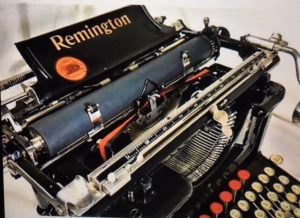 The keys were arrayed in a fan-like shape and the biggest hassle was hitting two keys at once, causing them to jam at the platen, requiring manual separation—also a messy business. 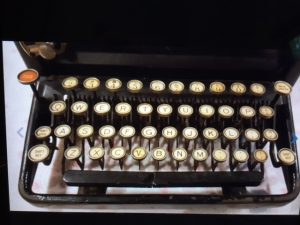 The keys were round buttons, black on white or white on black, of all letters and symbols—including a symbol for cents, no longer standard on keyboards today. The shift key was also labeled Freedom. 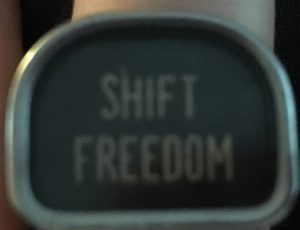 Being manual, the pressure on the keys was reflected in the lettering. All fingers not being equally strong, the end product often looked like this. 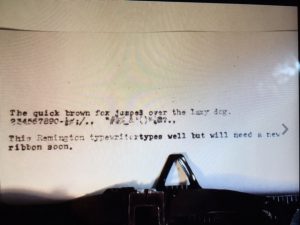 Editing back then was literally cut and paste, then retyping the rearranged text. Moving a paragraph—or even a sentence—meant retyping and entire page or maybe more.
Correcting a spelling error meant using a round rubber wheel with an attached brush. This is such an ancient artifact now that sculpures of them are in museums and gardens.
That was a time when making copies meant typing carbons. Each page and carbon had to be corrected separately—and heaven forbid one erased a hole in the paper.
I learned Mrs. Echard’s lesson well. I never after hand-wrote a draft, or much of anything else. By now, I find it difficult to hand-write a thank you note!
BOTTOM LINE: not that long ago, writing was a very slow, laborious activity.  I marvel that anything got written at all.