Skip to content
Basically, passive voice is when the noun or noun phrase that could be the object of an action becomes the subject. Passive voice permits permits subjects to have something done to them by someone or something. For example, an active sentence would be “Our team won the trophy.” A passive one would be “The trophy was won by our team.”
In general, authorities urging good writing advise writers to use the active voice as often as possible. Among other things, in order to convey the same amount of information in the passive voice requires more words. In the example above, the passive voice required 7 words rather than 5. Using the passive voice is often labeled as flabbier, less direct, and wordier writing.
But there are several reasons to use the passive voice. As writers, we should use all the tools at hand to achieve our ends.
Bryan A. Garner identifies six ways in which the passive voice is acceptable or even preferred.
—When the actor is unimportant or not worth mentioning (in the context). Cheering crowds were barricaded all along the race route.
—When the actor is unknown. Overnight, Thanksgiving food baskets were left on 205 doorsteps in low-income neighborhoods.
—When you want to hide the actor’s identify. This is the classic: Mistakes were made. When no agent is unidentified, no responsibility is claimed or allotted—passive voice can erase who or what performs an action.  On October 11, Anthony Ekundayo Lennon posted a powerful comment illustrating this aspect of the psychology of language. In part, he said, “We talk about how many women were raped last year, not about how many men raped women. We talk about how many girls in school district were harassed last year, not about how many boys harassed girls. We talk about how many girls in the state of Vermont got pregnant last year, rather than how many men and boys impregnated teenage girls.”
—When you need to put the punch word or drama at the end of the sentence. In this instance, the agent is identified using a by-phrase. “Can you believe it? Earl was beaten up by his own son!” 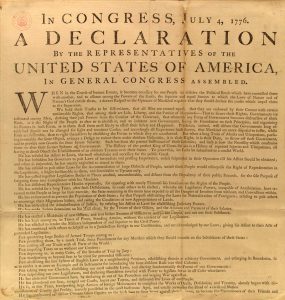 —When the focus of the sentence is on the thing being acted on. The abused child was starved nearly to death.
Passive voice is not necessarily limp. For example, “. . .all men are created equal, that they are endowed by their Creator with certain unalienable Rights, that among these are Life, Liberty, and the pursuit of Happiness.” (U.S. Declaration of Independence, italics added)
—When the passive simply sounds better—often because of the modifiers creating long phrases. The wedding was planned by Heavenly Options, event planners who specialize in weddings, birthdays, funerals, and anniversary dinners with a strong Christian theme.
Bottom line: If you want your words to seem impersonal, indirect, and noncommittal, passive is the choice!