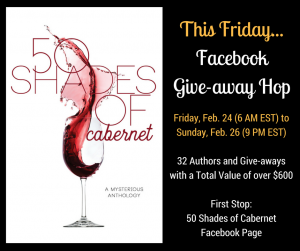 This past weekend I participated in a Facebook Hop to help promote the 50 Shades of Cabernet mystery anthology which is about to be published. It was a first for me. People were encouraged to hop from one FB page to the next and register for whatever that person was offering. It seems to have been very popular. 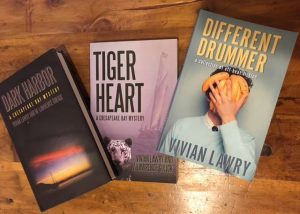 My giveaway was signed copies of my books. In order to qualify, I asked people to answer the question, “If you could be reincarnated as any writer, any time, anywhere, who would it be? Why?” Given that this was associated with a mystery anthology, it isn’t surprising that many people cited mystery writers. But not all! Here, in alphabetical order, are all the writers mentioned. 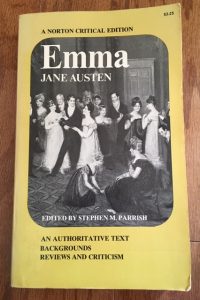 Jane Austen—who can count the reasons? 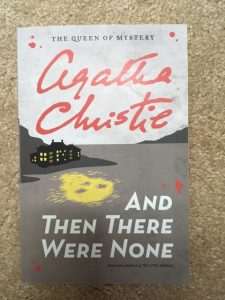 Agatha Christie—a classic choice by several for reasons from youth reading, to she went to exotic places, to she solved crimes before technology
Beverly Cleary—even though she’s still alive
Blaise Clement—b/c her pet sitting books are great
Jackie Collins—b/c her books are fun
Michael Creighton—b/c the reader learns something new in every book
Tim Dorsey—b/c he seems to really enjoy his life
James D. Doss—writes clean mysteries with hilarious acerbic asides
Jessica Fletcher—b/c she is fictional and will live forever!
Dick Francis—b/c he got to ride horses, worked for the Queen, and lived a long life 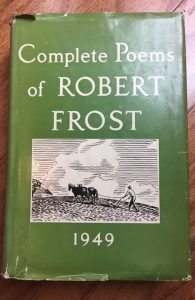 Robert Frost—b/c his poetry is wonderful
Homer—and who needs a reason?
Colleen Hoover—b/c she is just damned AWESOME
P.D. James—insert your own reasons
Carolyn Keene—b/c she was a favorite youth read (for more than one responder) 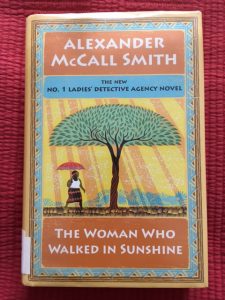 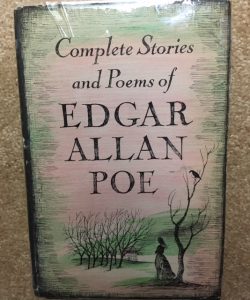 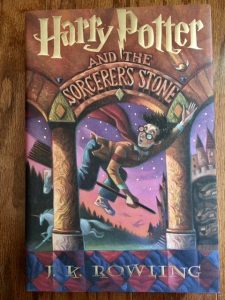 J. K. Rowling—right before she became famous for Harry Potter
Ann Rule—b/c she has a really special mindset
Dr. Seuss—b/c of his wonderful imagination
Anna Sewell—wrote Black Beauty, etc.
J. R. R. Tolkien—b/c he has a rich imagination
Laura Ingalls Wilder—b/c she wrote what she lived 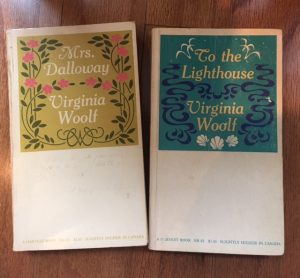 Virginia Woolf—b/c she felt so deeply and expressed those feelings wonderfully
I’ve edited some of the responses to fit the “because” format, but tried to keep the meaning. All of these come recommended. Why not pick up an author you haven’t read? 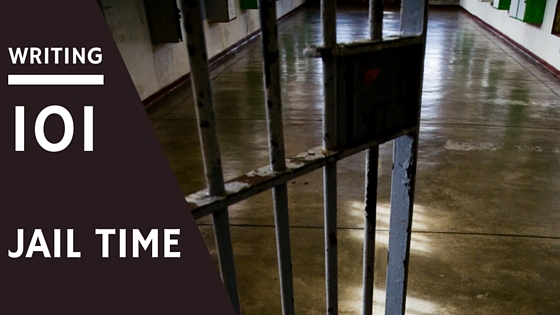 Every writer who has a scene involving an arrest and/or jail time really should do some jail time—preferably in the local facility. On April 21st, I toured the Richmond City Justice Center (a.k.a., the City Jail). I start by thanking all involved. This facility is modern, clean, and apparently well-run and forward- thinking. While JCRC seems exceptionally good for what it is, you wouldn’t want to live there
Even though I had toured the Queen Anne’s County Sheriff’s Office and did interviews there when writing Dark Harbor, time has passed and jails differ by locale—by state, by rural/urban, by tax base. When it comes to jail time for writers, once is probably not enough.
The mission of the Richmond City Sheriff’s Office is, in part, “To maintain a secure jail and a safe court system along with seamless inmate transport and civil process to preserve public safety.” This is, more or less, the mission of sheriff’s in all jurisdictions.
But the devil is in the details. For example, at the RCJC, inmates (whom they call residents) can have one visit every seven days, four visitors at a time, children under 12 not included in the count. At the Pamunkey Regional Jail nearby, inmates are called inmates; a total of three people, counting both adult(s) and minor(s) can visit.
And, by the way—here—any jail with Regional in the name is a for-profit facility.
Both of these facilities require photo IDs for visitors and forbid too short, too tight, too revealing, or transparent clothing. Nothing can be given to inmates (food, paper, drugs, keys, pictures, etc.)  RCJC has options for both face-to-face visits, separated by a clear partition, or a set-up similar to Skype for video visits.
At present RCJC houses approximately 1000 people, approximately 10% women. Most are in the general population, but about 150 are in “The Program,” a 24/7 structured program of education and rehabilitation geared toward successful reentry into the outside world.

WRITERS, get the details right.

CLOTHING: RCJC residents wear jumpsuits that are color-coded according to which pod they live in and whether they work custodial or kitchen duties. There are 32 living pods, ranging from 12 to 76 people each. Only those in for detox or overnight transfer wear orange. Black and white stripes are for the most violent/dangerous prisoners.
MEALS: at RCJC, breakfast is at 5:00, lunch at 11:00, dinner at 4:00. Lights out is at 11:00, so lots of time between dinner and breakfast. Which brings us to commissary sales. Inmates can buy food, t-shirts, and other incidentals (though no tobacco and no makeup).
PRISONER CLASSIFICATION. When taken into the facility, each person is assigned to a level of restriction based on the seriousness of the crime, criminal history, and behavior while in custody. People who are more violent, suicidal, or seriously deranged are in smaller pods and have more restrictions on meals and showers. They have video monitors, take meals in their cells, and are taken from the cells in handcuffs. Showers are in a locked and barred shower stall they call “the cage.”
Much of this information could be obtained online or with phone interviews. But nothing beats actually being there! I toured RCJC with seven other Sisters in Crime, all of us writers. Mary Miley, who teaches writing in The Program every Monday afternoon, arranged the tour. (I’m on the far left, Mary is second from the right.)
We learned that the carpeted areas are not secure and the tiled areas are. “The Yard” for open-air activity mandated by law is a room with a basketball hoop and open-air ventilation. All furniture can be bolted down, even though it isn’t in most cases. We actually saw the tiny white cells with bunk beds, a toilet, and a washbasin, shoes lined up and everything else in duffels under the bed, virtually bare of anything personal—unless one counts one plastic bowl and one plastic glass. The women had a few more toiletries visible—presumably from the commissary. Family needs to deposit funds for use in the commissary. 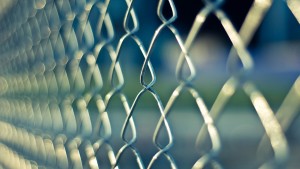 By the way, RCJC charges inmates $1 per day (toward the $58/day that their incarceration costs). They could charge as much as $3 per day. If these charges aren’t paid, the inmate can’t have commissary accounts.
Contrary to Orange Is The New Black, women inmates have no nail polish and no makeup—though sometimes they use M&Ms, Kool-Aid, or iodine for the purpose.
LINGO: a click is a phone call; a lick is a theft; a canteen girlfriend is someone who’s into a relationship for the partner’s canteen account; riding the phone means monitoring it.
Technically, jail is for people awaiting trial or the outcome of an appeal, and for those serving sentences up to one year, while prison is for longer incarceration; in actuality, due to prison over-crowding, inmates are sometimes in jail up to three years.

Gambling and bullying are strictly forbidden, but they do happen. Ditto intimate relationships among inmates.
And there’s more: the distinction between public defenders and court-appointed attorneys. The gangs that “own” the phones in the general population. The nine arresting bodies that bring people to the RCJC. The total lack of privacy for phone calls or during visitations—and what people say or do anyway! Inmates and visitors who expose themselves. The girlfriend who calls and barks for fifteen minutes while her incarcerated boyfriend tends to his arousal.

Two things in particular that inmates said stuck with me.

In short, there’s nothing like being there. Get thee to jail, pen and paper at hand! And be sure to appreciate the access. Thank you, RCJC! Special thanks to Sarah Scarbrough, who conducted the tour.
Click here to view photos of the Richmond City Justice Center from the Richmond Times-Dispatch.
Have you participated in a jail visit? Please tell me about it in the comments below, on Facebook, or Twitter.