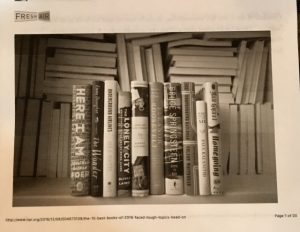 At this time of year, everyone seems to do “Best of…” lists about everything. So I’ll jump on the bandwagon with great reads from 2016.

On December 8th, NPR’s Fresh Air featured “The 10 Best Books of 2016 faced Tough Topics Head On.” You can hear the segment or get the transcript on the NPR website. But to entice you: 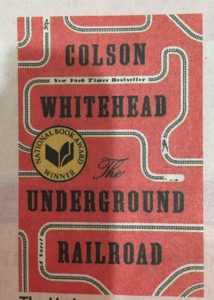 Homegoing by Yaa Gyasi is a debut novel– not surprisingly, a multi-generational family saga. This book deals with the slave trade among Africans.

Here I Am by Jonathan Safran Foer tells of a marriage/family falling apart.

The Wonder by Emma Donoghue is about religious delusion and self-denial, set in Ireland in the 1800s.

The Lonely City: Adventures In The Art Of Being Alone by critic Olivia Laing is nonfiction, on the connection between loneliness and visual art.

Eleanor Roosevelt: The War Years And After, 1939-1962 is the third and final volume of this biography.

Eyes On The Street: The Life Of Jane Jacobs by Robert Kanigel is another excellent biography, this one of a female writer, activist, and “public intellectual.” 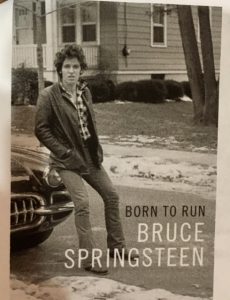 Born To Run by Bruce Springsteen is the tenth book mentioned. It’s a lyrical telling of his roots and his rise to stardom.

I happen to like and trust NPR picks. But these lists are everywhere. 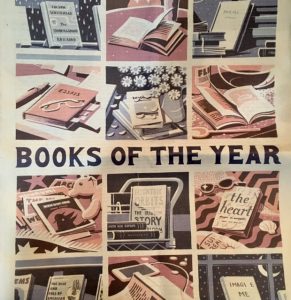 The December 10-11 issue of The Wall Street Journal’s BOOKS OF THE YEAR feature gives you great variety. Your local library probably has it archived, and it’s worth a look. It includes the year’s reading of fifty varied, prominent people.

Tom Nolan gives his choices for the best mysteries of the year.

WSJ pictures 20 covers of their books of the year. 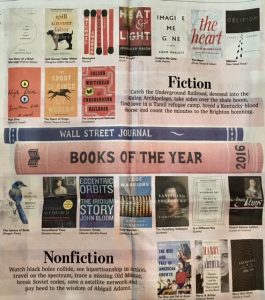 And it gives catchy titles to several reviews. The World’s Most Mysterious Book is The Voynich Manuscript, edited by Raymond Clemens. Double Barreled Magic is Morning, Paramus by Derek Walcott and Peter Doug.

Of Arms and the Freedom is a review of Thunder at the Gates by Douglas R. Egerton.

The Disease of the Enlightenment is Scurvy by Jonathan Lamb.

The Roads That Led From Rome deals with Ancient Worlds by Michael Scott.

The Eagle and the Dragon is the review of The Beautiful Country and the Middle Kingdom by John Pomfret. 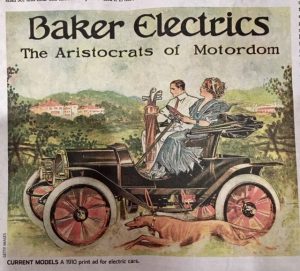 Last but not least is Everything Old Is New Again, a review of Rethink: The Surprising History of New Ideas by Steven Poole.

These are just two of the varied approaches to reading the year gone by. You can get lists from Amazon, Esquire, Barnes & Noble, Bloomberg, Goodreads, and many more.

So, dear readers, look back at 2016 and see what you might have missed.