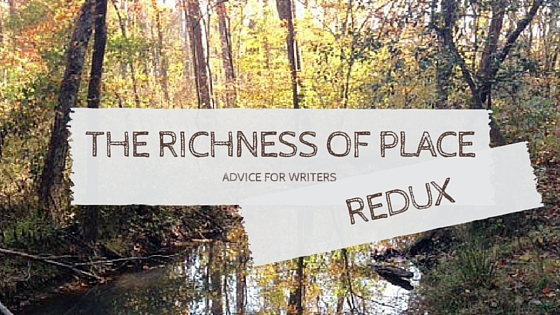 Since my last blog, I’ve continued thinking about place, and about ways for writers to make places richer. OVERALL ADVICE TO WRITERS: look for richness in trivia. I turn to books such as this (as you might expect) but you can find similar info online if you only ask the questions.
But where to start? Consider the following:
How common is this place name? In the U.S., here are 29 Franklins; 23 Clintons and Madisons; 22 Union/Union City and Washingtons. Or maybe the place is odd or unusual, as in Accident, MD; Between, GA; Boring, OR; Ding Dong, TX; Bumpass, VA; and Caress, WV, among others. Some cities have been immortalized in the titles of songs (think “Abilene,” “Chattanooga Choo Choo,” “El Paso,” “Kansas City,” “Viva Las Vegas,” “Battle of New Orleans,” “By the Time I Get to Phoenix,” among others).
In your place, is it called a stream or a creek? A brook, branch, or run? Is it a route or a highway?
How about Interstate highways? Anchorage, AK; Salinas, CA; and Brownsville, TX have neither Interstates nor freeways. Is public transportation readily available?
Where do residents come from? In my home state of Ohio, more than 71% of the people living in Cleveland, Cincinnati, and Toledo were born in Ohio. Pennsylvania has even more cities in which 71%-92% of the residents were born in-state. What might that say about your character as a resident born there? And what about a come-here? Ask the same question about Sun City West, AZ, where less than 1% were born in-state—or even Las Vegas, where less than 20% were born in-state.
What is the proportion of residents born in a foreign country? There are U.S. cities where more than 90% of the population is white, and others that are less than 5% white. Consider what your city’s profile says about tone, power, pride, access. The same questions can be asked regarding the proportions of women to men, of elderly to young, obese to fit.
Comparatively speaking, is this a rich place or a poor one? And where does your character fit into that continuum?
What do people do for recreation? Hunting or golf? Horseshoes or horse shows? Ice hockey or fox hunts?
The number of questions that can be asked about a place is infinite, and the variety of answers nearly so. No one would be expected to consciously craft answers to all questions. But consider the depth that answering a few of them might add.