Skip to content
Earlier this week a writing friend of mine, Fiona Quinn, invited people on Facebook to share their pet peeves. I shared two, one of which was characters who nod their heads. Perhaps I lack imagination, but I can’t think what else a person might nod. Shaking one’s head is a completely different matter, for all sorts of things—some of them body parts—can be shaken.
Which brings me to today’s blog. I get really annoyed with flabby writing—writing that includes unnecessary words or phrases. I’ll talk about four common types of flab: stating something for which there is no alternative, saying the same thing twice, naming characters or relationships already known, and stating an action that is inherent in another action.
Stating something for which there is no alternative. A character nodding his head is one of these. Here’s more flab. 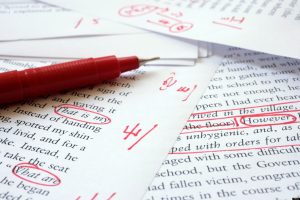 She rose to her feet. She stood up. She sat down. A bouquet of flowers he had gathered himself, by hand. He thought to himself. Who else could he think to? The usual or inevitable need not be stated, only the exceptions.  For example, if she stood aside it isn’t redundant.
Writing redundantly. In such a short span of time. At this point in time. He hesitated for a quick minute. With sudden haste. She quickly tore open the letter. Bickering back and forth. Opening a letter, “Now I shall see what my father thinks in his letter.”
Naming characters or relationships known to the characters and the readers. “The toll taken on him, her father, a man who…”  “Your invitation to my sister, Kitty…”  “Boasted to Mrs. Johnson, your mother…”  “Turned to her husband, David…”
Writing an action that is inherent in another action. “He stood and walked to the door.” Can one walk to a door without standing? “She started the car and drove away.” “He took the pot from the stove and served the potatoes.”
And then there is writing that just makes no sense. He inwardly exhaled?
The bottom line: All sorts of unnecessary words and actions slip into writing, especially first drafts. Cut them mercilessly. One good exercise is to try to shorten every paragraph by a line, or every sentence by a word. He rushed to the door is much stronger than he walked quickly to the door—and it’s more concise.