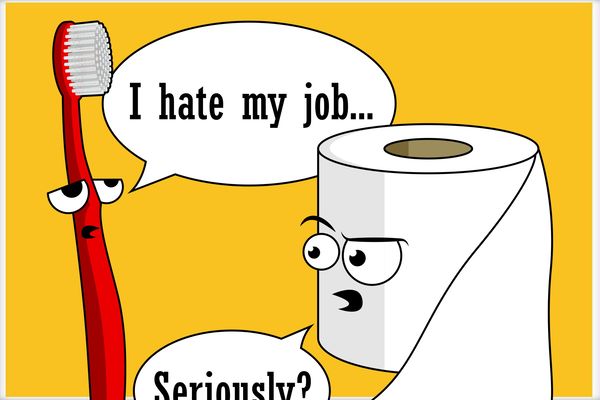 Why would you want one? Let me count some of the ways.

There Have Always Been Crap Jobs

In Ancient Rome there were puke collectors. Yep, it’s what it sounds like. Not only did the Coliseum have a vomitorium (the passage leading spectators to seating areas, not a room constructed for the purpose of vomiting between feast courses) that needed attention after major events, but during banquets guests often didn’t even leave their couches to vomit—in which cases, someone crawled around on the floor scraping up the mess. In some households, the same servant was responsible for sticking a feather down the diner’s throat to trigger their gag reflex and produce the mess to be cleaned.

Seneca the Younger, Book XII to Helvia His Mother on Consolation

In Tudor England, 70% of the aristocratic diet was meat, much of it roasted on iron spits in kitchen fireplaces. Spit boys turned the spits all day, every day. The work was strenuous, uncomfortable, and dangerously close to open flames and boiling fat drippings.

In Victorian England, there were rat catchers. Again, it was exactly as named. The streets and sewers in cities, especially, were infested. His tools of the trade were a big bottle of arsenic-based poison, a cage, and a terrier dog. Local governments paid per tail or per head. Often the rats were captured live for subsequent killing in public and/or for fights between the rats and the terriers, which afforded betting opportunities. Of course, there was always the risk of (probably infected) bites for the rat catcher.

Note to writers: If you write historical fiction, take care to find some of the worst jobs of the time. Details about characters working in these jobs can be a very effective way to illustrate general attitudes toward hygiene, class differences, and the overall living conditions of the poorest members of society.

Crap comes in many forms. Here, in no particular order, are several examples.

Low wages — People working in crap jobs often become stuck in a cycle of poverty, made worse by a lack of job security.

Jobs in steep hiring decline — The common thread among many modern crap jobs is that technological advances have depressed the need for people producing their goods or services.

Stress factors — Even a well-paying job can be a crap job if it includes tight deadlines, physical demands, and danger.

Writers note: you may already have characters with some of these jobs. Consider more focus on the crap factor.

Boredom — See my earlier blog on sources of boredom. Here are a couple of examples that might not immediately come to mind, as well as a few more obvious ones.

Note to writers: this list is almost endless. Look online.

Disgust. I found most of these at careeraddict.com.

Crap Jobs in the Time of COVID-19

Because of special circumstances associated with the pandemic, jobs that might otherwise be low on the crap index are suddenly topping the list. Despite being told to stay at home and interact with as few people as possible, some jobs still need to be done. In addition to generally low pay, boredom, stress, regular phyisical danger, these employees now face frequent interactions with possibly infected people, extra duties to cover for colleagues out sick or quarantines, and dealing with a particularly irate (often abusive) public.

Employers don’t provide health insurance, paid sick leave, paid family leave, or childcare allowances for the majority of these employees. And no one brings them free lunches or sings their praises from the balconies at night. Dr. Ben McVane posted on twitter, “Many of my patients work jobs classified as essential, be they cab drivers, construction laborers or delivery workers, without receiving any essential protections or job security.”

Now, because of Covid-19, we’re being told that Amazon workers are “the new Red Cross”. But we don’t want to be heroes. We are regular people. I don’t have a medical degree. I wasn’t trained to be a first responder. We shouldn’t be asked to risk our lives to come into work. But we are.

Bottom line for writers: a job can be crappy in more than one way, so consider all the angles when you write crap!