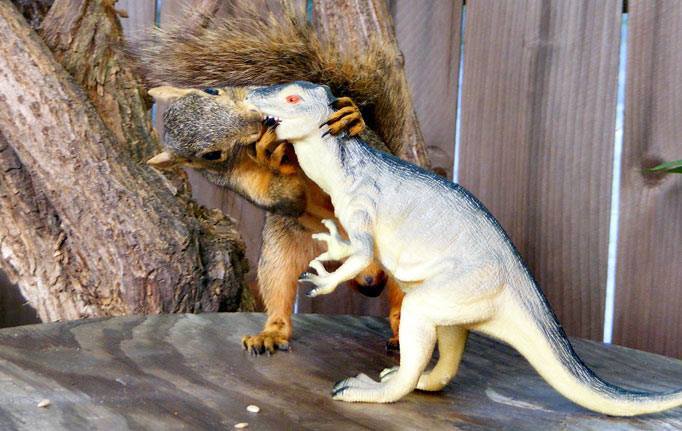 Writers take note: a squirrelly character could be an excellent choice!

Squirrel origins. The word “squirrel” appeared as early as 1327.  Archaeological evidence indicates that squirrels originated in this (Virginia/Carolina) region of North America some 35-40 million years ago. Modern squirrels are divided into some 289 species. I’m going to focus on Eastern Gray Squirrels for two reasons: (1) they are the most numerous group; and (2) those are the ones in my back yard!

Squirrel habitat. Gray squirrels are tree-dweller. They build nests (called dreys) in the forks of tree branches. They use twigs and leaves, sometimes take over bird’s nests, or inhabit a permanent den hollowed out in the trunk or large branch of a tree. Wherever the nest, it is likely lined with moss, thistledown, dry grass, and feather insulation.

When access can be gained, they will take up residence in the walls or attics of houses—the scrabbling around driving the human inhabitants nuts, resulting in extreme (and often expensive) efforts to get rid of the invaders and block future access. But it’s worth it, because among other things, squirrels gnaw on electrical cords creating a fire hazard.

Squirrel diet. Squirrels are predominantly vegetarian, eating tree buds, berries, many types of seeds and acorns, nuts (walnuts, peanuts, hazelnuts, and others) and some types of  woods fungi. They can damage trees by tearing the bark and eating the soft tissue underneath. They raid gardens for tomatoes, corn, strawberries, and other garden crops. They cannot digest cellulose.

What I find especially frustrating, they often don’t actually eat what they damage, merely taking a bite or two and leaving the rest. Sometimes they eat tomato seeds and leave the pulp. They’ve been known to nibble my decorative pumpkins, taking a few bites and returning over time to take a few more bites, each time nibbling in a fresh spot.

If driven to it by hunger or other conditions, they prey upon insects, frogs, small rodents (including other squirrels), small birds, birds’ eggs. They will gnaw on bones, antlers, and turtle shells, possibly as a source of minerals scarce in their normal diet.

When opportunity arises, they will raid bird feeders for millet, corn, sunflower seeds, etc. Hanging out around bird feeders means opportunistic squirrels are perfectly situated in the middle of a relatively high bird population, increasing their ability to raid nests, eggs, and nestlings.

What characterizes your character’s diet—and why?  Omnivore, herbivore, carnivore. Exploratory, picky. Eat to live, live to eat.
Gray squirrels are scatter-hoarders.  They hoard food in numerous small caches for later recovery. Each squirrel is estimated to make several thousand caches each season! Recent research indicates that squirrels can remember and recover up to 90% of the food they bury. This is probably a combination of excellent spatial memory and sense of smell.

The amount of food they have to hide no doubt explains why squirrels are constantly digging in my patio pots and flower beds! Even as I type they are uprooting pansies and breaking off the green stalks that would otherwise become daffodils.

Is your character a hoarder? Of what? Where? How?
Squirrels are smart and devious.  In order to keep other animals from digging up their food caches, they sometimes pretend to bury it. They prepare the spot as usual, pretend to put the food in while actually concealing it in their mouths, and then covering the hole as if the food were there. They also hide behind vegetation while burying food or hide it high up in trees. These behaviors appeared to be learned.

How does your character treat coworkers? Family? Friends?

Reproduction.  Grey squirrels can breed twice a year when fully mature (if food is abundant), once in the spring for younger females. These squirrels are polygynous—i.e., competing males form a hierarchy of dominance and the female mates with multiple males depending on the hierarchy. Five days before a female enters estrus, she may attract up to 34 males from up to 500 meters away.

Typically one to four kits are born in each litter, hairless, blind, and deaf. They begin to leave the nest around 12 weeks. Only 25% of the kits survives to one year of age. More than half die the next year. After that, mortality is about 30% of the survivors per year.  An adult typically lives about 6 years in the wild, though it can be as many as 12.

Communication. Squirrels use both sounds and body language to communicate. They squeak, utter a low-pitched noise, a chatter, a raspy “mehr mehr mehr” as well as “kuk” or “quaa” (vocals warning of predators). Biologists describe an affectionate coo-purring sound used between a mother and her kits and by males when they court a female during mating season.

Squirrels also communicate by tail-flicking, facial expressions, and other gestures. The relative reliance on vocal versus physical signals depends on ambient noise and sight-lines.

And one very special talent. Gray squirrels are one of very few mammalian species that can descend a tree head-first. It does this by rotating its back feet 180 degrees so the backward-facing claws can grip the tree bark. The benefit of this ability isn’t limited to trees. Squirrels are incredibly athletic, jumping among tree limbs or from trees to other object, and gasping with both front and back paws allows them to climb slim poles and hang both upside-down and right-side-up. In my back yard, and I presume other places, a tree branch bouncing and swinging in the morning sun is the signal that a squirrel is about to jump from the tree to the bird feeder—where it grasps whatever comes first to hand.

The beauty of gray squirrels. Gray squirrels have silky fur and bushy tails. They have predominantly gray fur with a white underside, but (like the gray wolf) can exhibit colors variations: brownish, black, and white. Squirrels that are almost entirely black predominant in certain geographic areas, specifically in the north, where it appears that their dark color is a survival adaptation to cold temperatures.

Albinos are present throughout nature, including among gray squirrels. Albinos squirrels have pure white fur with red eyes. White squirrels, on the other hand, are a genetic variation of the eastern gray squirrel, white but usually with a small patch of gray head patch and dorsal stripe. AND it has dark eyes.

In general, white squirrels are at a disadvantage, rejected by other squirrels and easily sighted by predators. However, in certain geographic areas, humans have taken a hand and allow white squirrels to thrive: Brevard, North Carolina; Marionville, Missouri, Olney, Illinois; Kenton, Tennessee; and Exeter, Ontario. The premier location seems to be Brevard, where one in three squirrels is white, the highest percentage white of any known squirrel colony. In 1986, Brevard passed an ordinance making the city a sanctuary for white squirrels, and now they celebrate a White Squirrel Festival.

I was fortunate enough to see a white squirrel in my back yard.—which makes me part of a (somewhat) elite club. Even though a white squirrel is still basically a talented tree rat, it has symbolism on its side. In folklore all-white animals have long been seen as portents of good luck, symbols of purity, and even visitors from the realms of gods and spirits.

This would naturally segue smoothly into a discussion of squirrel symbolism, but that turns out to be way too expansive for this blog. There are numerous online discussions of squirrels as totems, spirit animals, and animals of power. There is even an essay on the meaning of a squirrel appearing in dreams, depending on how and what it’s doing.

Writers: consider reading up a bit on squirrel symbolism because all of these articles describe the behaviors/characteristics of people with a squirrel connection.