Skip to content
Last Friday 5 A Wrinkle in Time (Re)Readers met at Bowtie Cinema for the movie. Great conversations before and after. I’ve often said that I never met a boring writer! And frankly, socializing was the Friday night gold; the movie, on the other hand, was barely bronze.
In the interests of full disclosure, I admit to a bias against Disney movies. They have “prettified” great fairy tales, which I find hard to forgive. But that said, there are specific reasons I think that in this case the book is much better.
One expects some things to be cut when a book becomes a movie. I, for one, didn’t mind that two of Meg’s brothers were cut. They played virtually no part in the book. On the other hand, I’m disappointed that all the science was cut, limited to a few scenes showing science-looking equipment. And contrary to the book, Meg’s father uses the phrase “wrinkle in time” right up front.
But my biggest disappointment was that the movie changes the characters! In the book, Mrs. Which is barely there physically, having difficulty maintaining a corporeal form. In that role, Oprah Winfrey is the opposite. She is introduced as larger than life, a giant with sparkling makeup and clothes that reminded me of armor. Even at a human size, she dominates every scene in which she appears, and I was constantly aware that I was watching Oprah Winfrey playing a role.
I found the performance of Reese Witherspoon very appealing. I liked her insouciance and asides. But in the book Mrs. Whatsit never doubted Meg, her commitment, or her ability.
I didn’t really mind the combination of the ultimate evil and the IT. I wasn’t sure what their separate spheres were in the book. And in the movie, I liked the images of the evil snaking out into the universe.
Which brings me to what I liked about the movie. Disney does special effects well. I especially liked the images of Mrs. Whatsit flying through space with the children on her back—though in the book, I don’t remember that the children also flew. 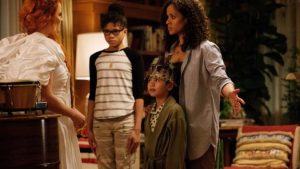 Storm Reid and Deric McCabe were great as Meg and Charles Wallace! They were believable, rich, and true to their characters in the book.
I applaud the cross-cultural, cross-race depictions. On the other hand, by the end of the movie, I felt as though making sure every couple as well as the three Mrs. were multiracial was a bit forced.
Last but not least, where the book is sophisticated the movie is a sledge hammer: light and love conquer darkness and evil. But I guess however one gets the message, the message is good.
Read the book and see for yourself! What do you think?