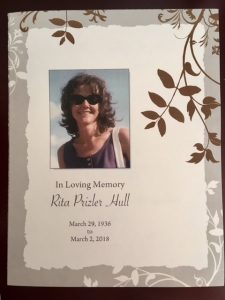 Last Saturday I participated in a memorial service for my beloved friend. It was one of the best celebrations of a life I have ever attended, so perfectly reflecting the accomplished, funny, strong, loving woman I remember. I first came to know Rita through writing classes—maybe 15 years ago? In years, I was one of the people there who knew her least. But through writing, we quickly came to realize we were more than classmates. She and I joined with 3 other women writers to form the Pentadames. A few times a year we would get together for a few days in the mountains, on the Bay, or at the Outerbanks. We talked writing, of course—and reading—but also families, personal histories, health. And we laughed a lot!
I don’t remember death dates. I choose not to. Instead, I remember and celebrate special people on their birthdays. I do this by having food that she often prepared or that he especially liked. Rita shared her birthday with another of the Pentadame, now also deceased. On March 29, I shall remember them both with a lentil/vegetable stew, a meal Pentadames often shared. 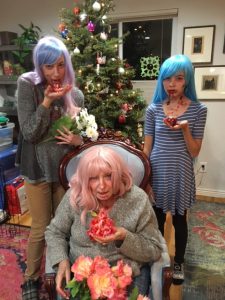 On Sunday I made real progress on a fantasy short story I have promised my granddaughter. It’s about hanahaki disease. You can look it up!
In the creative nonfiction class on Monday, one of the timed writings was to use a piece of art as a prompt. I chose the displays of artists’ collections on the first floor of the VMFA Studio School. 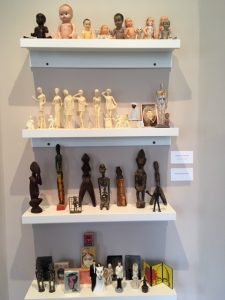 I wrote a rather lackluster bit about my many collections: rocks, dictionaries, cookbooks, napkin rings, placemats, Depression glass measuring cups, tableware, and drinking glasses…  I didn’t even remember to include the (approx.) 450 carved wood Santas, dozens of mah jong sets, or skull jewelry. Looking back on that bit of writing, I am struck that food and eating are strong themes in my collections. 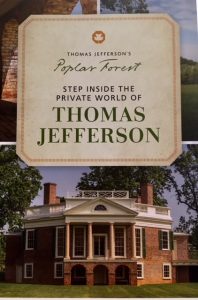 Tuesday included new (to me) insights into Thomas Jefferson. Travis McDonald has been the director of architectural restoration at Jefferson’s retreat, Poplar Forest, for nearly 30 years.  He’s articulate and incredibly knowledgeable. 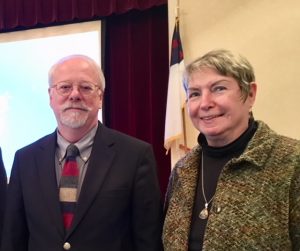 We had lunch together after the talk. (Always food!) I came away from it with a much enhanced admiration for Jefferson as a mathematician and an architect. And not to put too fine a point on it, he well might have been OCD: while president, he sent incredibly detailed instructions to those working on the Poplar Forest house, and he came down from DC to help lay the brickwork foundation for the octagonal house to make sure the workmen got it right.
I went from lunch to Core Basics to a meeting of the Ashland Women’s Club, where a friend of mine presented a paper on oystering. It wasn’t a topic I would have gravitated to on my own, but it was a pleasing blend of science, history, and humor. In the course of the talk, the speaker quoted M.F.K. Fisher’s book, Consider the Oyster. 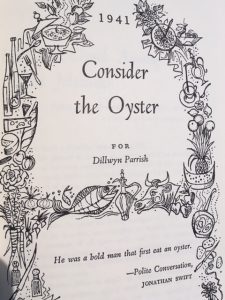 “An oyster leads a dreadful but exciting life. Indeed, his chance to live at all is slim, and if he should survive the arrow of his own outrageous fortune and in the two weeks of his carefree youth find a clean, smooth place to fix on, the years afterwards are full of stress, passion, and danger. He—but why make him a he, except for clarity? Almost any normal oyster never knows from one year to the next whether he is he or she, and may start at any moment after the first year, to lay eggs where before he spent his sexual energies in being exceptionally masculine. If he is a she, her energies are equally feminine, so that in a single summer, if all goes well, and the temperature of water is somewhere around or above seventy degrees, she may spawn several hundred million eggs, fifteen to one hundred million at a time, with commendable pride.” 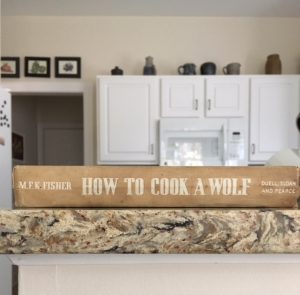 The quote reminded me of what is (arguably) my favorite M.F.K. Fisher book, How to Cook a Wolf. This book was first published in 1942, when WWII shortages were at their worst. In the opening chapter, Fisher says, “Wise men forever have known that a nation lives on what its body assimilates, as well as on what its mind acquires as knowledge. Now, when the hideous necessity of the war machine takes steel and cotton and humanity, our own private personal secret mechanism must be stronger, for selfish comfort as well as for the good of the ideals we believe we believe in.”
Although Fisher’s books are dated in some ways (she makes no mention of microwaves, to mention only one) her recipes, philosophy, and stories are timeless. 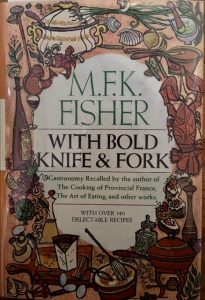 In browsing my M.F.K. Fisher books, I was touched to realize that my mother gave me With Bold Knife and Fork—as a second-hand book published thirty years earlier—the year before she died.
So, come Wednesday, a fellow writer who knows I’m a John McPhee fan sent a link: https://www.newyorker.com/magazine/1972/05/13/the-conching-rooms. 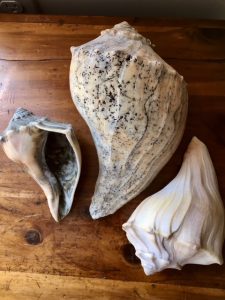 Remembering the incredible conch salads made before my eyes in the Bahamas many years ago, I was thinking mollusks. Imagine my surprise when I discovered that the article dealt with the making of chocolate!
I visited Hershey’s Chocolate World last December. Now the tour isn’t of the actual working factory, and I didn’t see chocolate actually being conched. So McPhee’s essay was interesting—as always—and it’s about food, so that thread of the week continued. And FYI: Hershey chocolate contains minute traces of New England granite from the conching machines. Who knew? 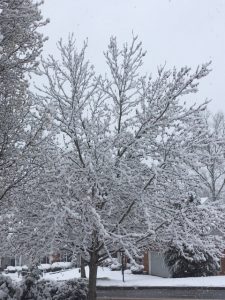 We had 4” of snow Wednesday, allowing me to mouse around the house in comfy fleece and let one cookbook lead me to another. Somewhere along the line, M.F.K. Fisher mentioned 19th century cookbooks. I pulled out my oldest. It isn’t in good shape—as might be expected given it was printed in 1843.
But there are several interesting aspects. First, recipes are presented in paragraphs. For example, this recipe for BEEF CAKES. “Take some cold roast beef that has been under-done, and mince it very fine. Mix with it grated bread crumbs, and a little chopped onion and parsley. Season it with pepper and salt, and moisten it with some beef-dripping and a little walnut or onion pickle. Some scraped cold tongue or ham will be found an improvement. Make it into broad flat cakes, and spread a coat of mashed potato thinly on the top and bottom of each. Lay a small bit of butter on the top of every cake, and set them in an oven to warm and brown. Beef cakes are frequently a breakfast dish.”
Then, too, there is an entire section on perfumery. And an interesting list of equivalents and measures. 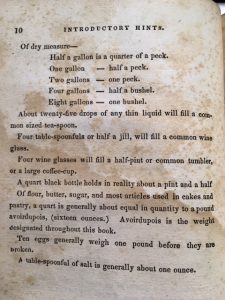 Thursday, we re-ordered canned goods in the pantry to use the oldest first and I continued to dip into my cookbooks. By 1880 and 1887, Miss Parloa was something of a household authority on everything from kitchen equipment to marketing and the layout of the ideal kitchen, but by far the bulk of the content was recipes. 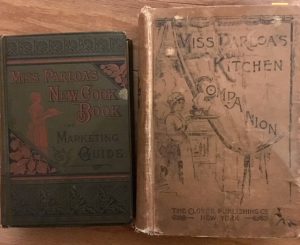 Over the course of the week, I realized that I like reading food writing almost as much as I like savoring new recipes. I like cookbooks with personality—of whatever vintage! 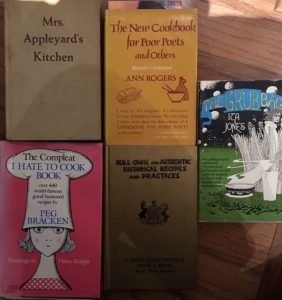 This essay may seem pretty tangential to a blog for writers, about writing—but bear with me! I now realize that the best food writing is, indeed, excellent creative nonfiction. M.F.K. Fisher lives! 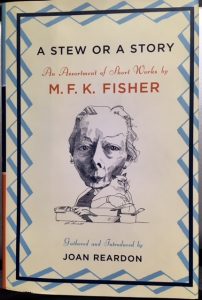 So, the week started with fantasy, wended its way through history and food, and will end tomorrow with Mysterypalooza! 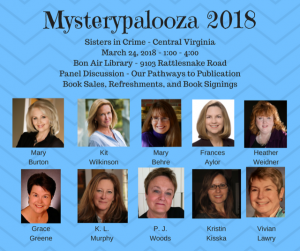 There will be a panel discussion on paths to publication and book signings by local authors. Come on down! I’ll be wearing skull jewelry. 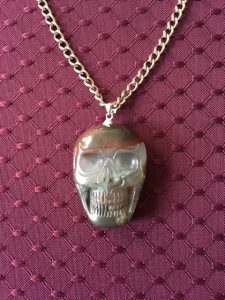