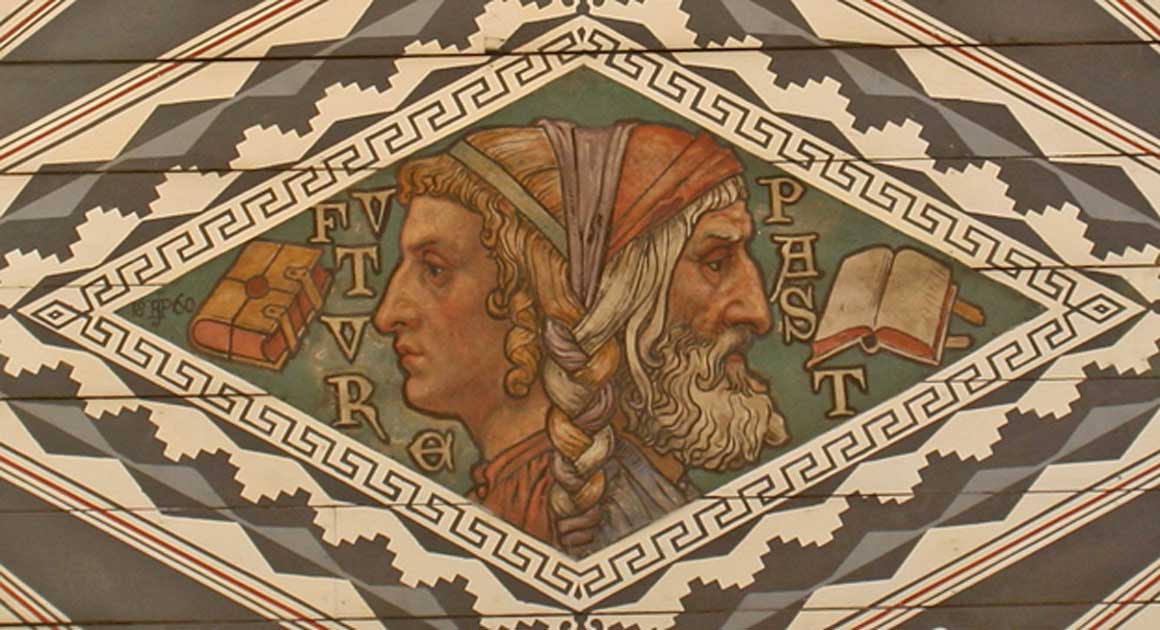 No news here: January is named for the ancient Roman deity Janus.

Although the date on which the new year “begins” has bounced around a bit (including Christmas, March 1, March 25, and Easter in the Christian calendar) the month of January has always been associated with Janus, the personification of transition and reflection.

In Ancient Rome, Janus was associated with doorways, gates, arches, and temporal transitions. Two faces on a single neck, facing opposite directions, represent his ability to see both past and future. His double face has also been seen as representing the end and the beginning of the year.

Another symbol of the new year from Roman and Greek mythology is the image of Jupiter/ Zeus slaying his father Saturn/ Kronos with a scythe. In doing so, according to legend, he freed his siblings and allowed a new generation of gods to assume control.

In short, there is a long tradition of the transition to a new year being an occasion to review the year(s) past and contemplate the year ahead.

Writers: consider the character who mourns the loss of the year past, who dreads the year ahead—or both. By its very nature, a transition involves uncertainty, vulnerability, and promise.

Recently, my youngest daughter texted, “I’m not a big fan of resolutions. (In my mind they always seem to a passive aggressive indictment of who you are—you should be better!) But I do like to look back on the past year and set goals for the next. I guess it’s semantics, really.” Semantics or not, I think it says a lot about how one approaches the new year: a time to fix, repair, improve or as an opportunity to accomplish something(s).

And that brings me to the Sankofa bird. (There is a second symbol of Sankofa, a stylized heart, but here I will focus on the bird because of its parallels with Janus.) Sankofa is a word in the Twi language of Ghana that translates loosely as “Go back and get it.” The basic elements of the Sankofa bird symbol are a plump bird whose body and feet face forward, long swan-like neck burns the head backwards, and an egg either on the bird’s back or in its mouth.

Even the loose translation from Twi can be interpreted several ways:

Bottom line for writers: Possible transitions for your characters are infinite: new job, relationship, location, loss of a loved one, landmark birthday, etc. Most years are a mix of good and bad: which weighs more heavily in your character’s review? Is s/he approaching the new year (or the time ahead) with hope and energy? Is s/he learning from the past or stymied by it?

2020 seems a perfect time to bring Janus and Sankofa into your characters’ lives!