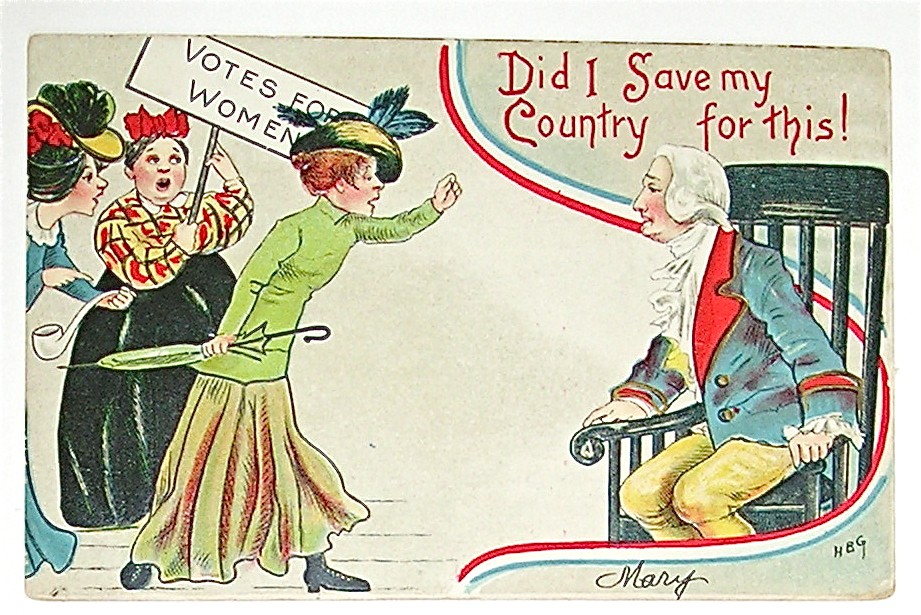 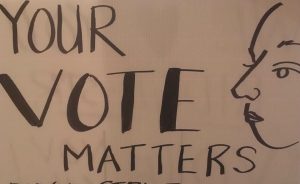 Today I’ll start with the bottom line: every eligible voter should exercise that right, duty, and privilege! In a democracy, voting is the strongest way for political representatives to know the will of the citizens.
This chart is difficult to read, but it essentially says that even now, the president is elected by less than 45% of the U.S. population. Granted, some people are too young to vote, or ineligible for other reasons. But even in the best years, only about 60% of eligible voters did so. 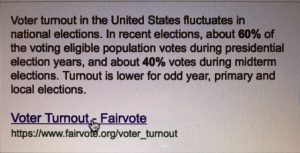 When I say voting is a privilege, I say so in light of the history of voting rights in the United States. Here is a list of the major milestones.
1789: The Constitution granted states the power to set voting requirements. Generally, states limited the right to vote to property-owning or tax-paying white males, approximately 6% of the population. 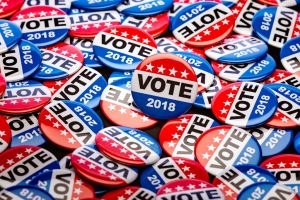 1790: The Naturalization Act of 1790 allowed white men born outside the U. S. to become citizens with the right to vote. 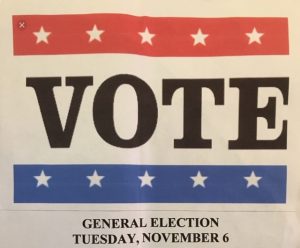 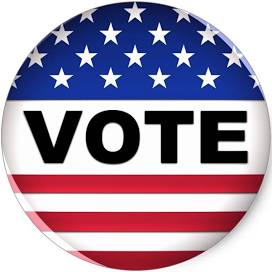 1792-1856: Abolition of property qualifications for white men, from Kentucky in 1792 to North Carolina in 1856, the periods of Jeffersonian and Jacksonian democracy. However, tax-paying qualifications remained in five states as late as 1860 (Massachusetts, Rhode Island, Pennsylvania, Delaware, and North Carolina). They remained in Pennsylvania and Rhode Island until the 20th century. 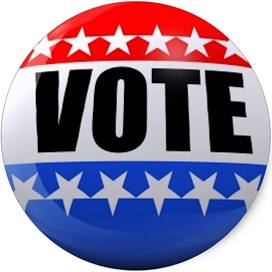 1868: Citizenship was guaranteed to all persons born or naturalized in the United States by the Fourteenth Amendment to the Constitution, setting the stage for future expansions of voting rights. 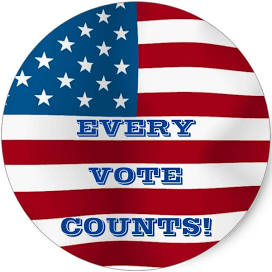 1870: Non-white men and freed male slaves were guaranteed the right to vote by the Fifteenth Amendment to the Constitution. Disenfranchisement after the Reconstruction Era began soon after. Southern states suppressed the voting of black and poor white voters through Jim Crow Laws. During this period, the Supreme Court generally upheld state efforts to discriminate against racial minorities; only in the 20th century were such laws ruled unconstitutional. Black males in the Northern states could vote, but the majority of African Americans lived in the South. 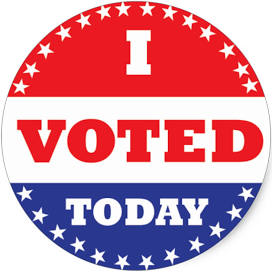 1887: By the Dawes Act, citizenship was granted to Native Americans who were willing to disassociate themselves from their tribe, making them technically eligible to vote. 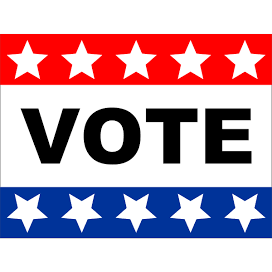 1913: The Seventeenth Amendment to the Constitution gave voters the right to elect Senators, rather than state legislatures doing so. 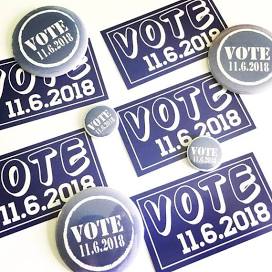 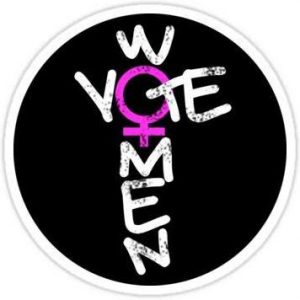 Women have had the right to vote for less than one hundred years. Many polls reveal gender gaps on issues and candidates. Don’t waste this opportunity to express your values! 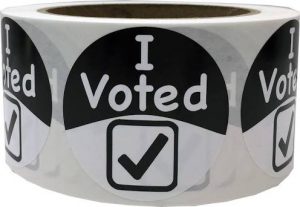 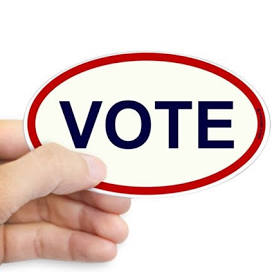 1943: Chinese immigrants were given the right to citizenship and to voting by the Magnuson Act. 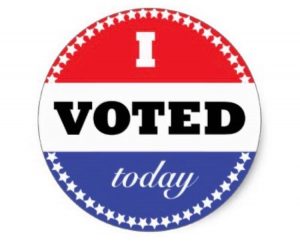 1961: Residents of Washington, D.C. were granted the right to vote in U.S. presidential elections by the Twenty-Third Amendment to the Constitution. 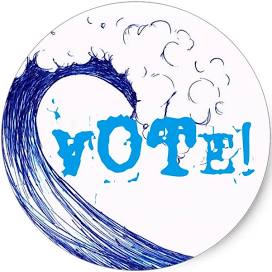 1964: The Twenty-Fourth Amendment to the Constitution prohibited poll taxes from being used as a condition for voting in federal elections.

1965: The Voting Rights Act of 1965 protected voter registration and voting for racial minorities. This was later applied to language minorities. This has been applied to correcting discriminatory election systems and districting. (Updated in 1975.) 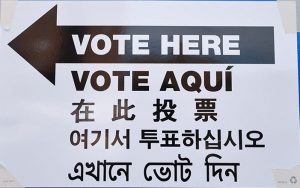 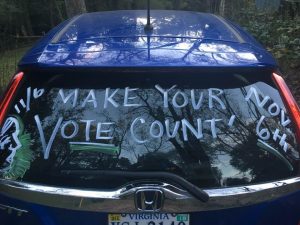 1971: The Twenty-Sixth Amendment to the Constitution granted the right to vote to those aged 18 through 21. This was in response to Vietnam War protests, which argued that soldiers who were old enough to fight for their country (and maybe die) should have the right to vote. 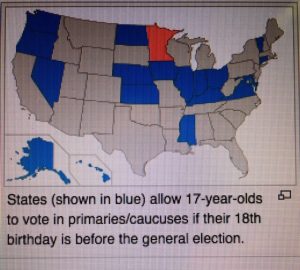 I’ve read that this age group is the least likely to vote. Some put the figure at 20%.
1986: U.S. Military and Uniformed Services, Merchant Marines, and other citizens overseas, living on bases in the U.S., abroad, or aboard ships were granted the right to vote in the Uniformed and Overseas Citizens Absentee Voting Act. 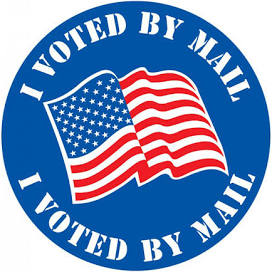 2013: The Supreme Court (in a 5/4 vote) struck down the heart of the Voting Rights Act of 1965, freeing nine states, mostly in the South, to change their election laws without advance federal approval. The core of the winning argument was that racial minorities no longer continued to face barriers to voting because “Our country has changed” (Chief Justice John G. Roberts, Jr.). The majority determined that specifying states that must receive clearance from the Justice Department or a federal court in Washington before they changed voting procedures, moving polling places, or redrawing electoral districts was unconstitutional. 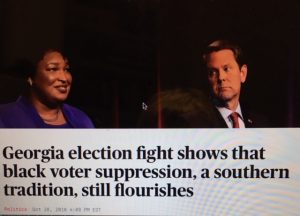 This year, major outcries have arisen about everything from ID requirements to relocation of polling places that have a disproportionate effect on minorities. For example, suppression of African American votes in Georgia, North Carolina, Florida, and Texas; Hispanics in Kansas; and Native Americans in North Dakota. Make the effort to vote in spite of obstacles! 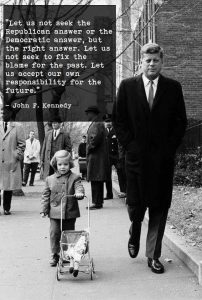 These are the appointments that will affect virtually all aspects of our lives in the near future. I’m urging you to do your research. Read about each of them, trying to find the strongest facts in support of and against the nominees.
Then, contact your senators. Your representatives can’t represent you if you don’t share your opinions. Tell them what you want them to do and why. (This last is optional.)
In Virginia, that would be Tim Kaine (phone # 540-682-5693) and Mark Warner (phone # 804-775-2314). I was told that the most effective contact is a phone call to the person’s local office. You will get through immediately and be treated politely.
If you don’t live in Virginia, comparable info for your senators is available online. Ditto for members of Congress. Alternatively, you could call the congressional switchboard at 202-225-3121, and they will transfer you to the appropriate office. Unfortunately, when I tried to do this, the switchboard was swamped and I didn’t get through. 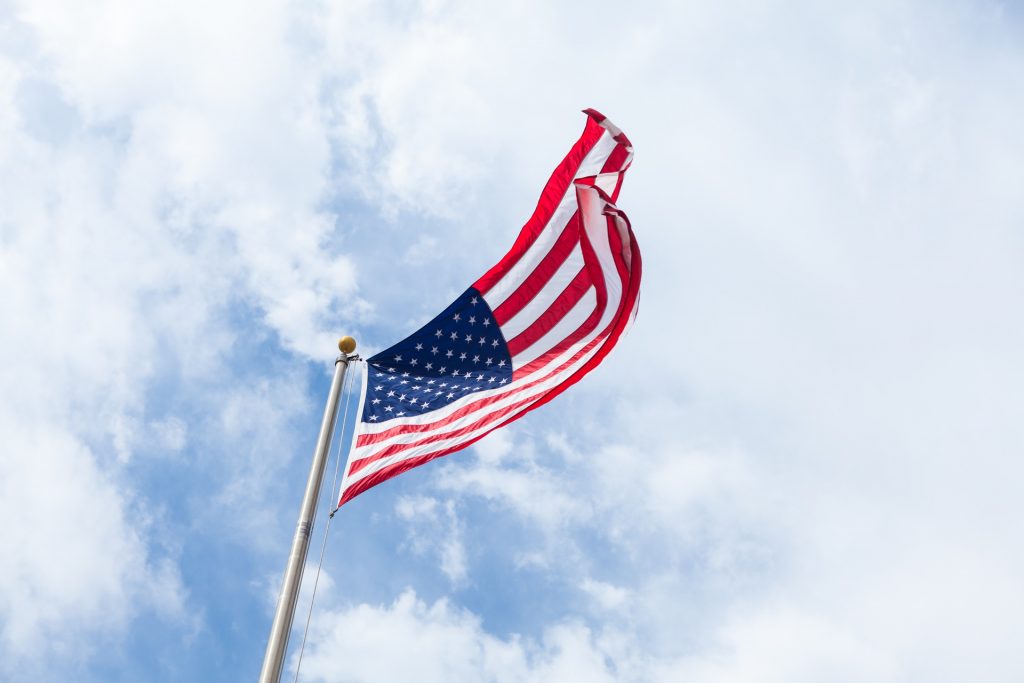 We are citizens even before we’re writers. Be informed. Be involved.