Skip to content
October is traditionally the month to bring out Jack-o-Lanterns, ghosts, spiders, monsters of all sorts, and skeletons. But this October, my focus is on human skulls. Some of you are aware that I have been posting skull pictures on FB daily. But why? Short answer: because I love them! They can, do, and always have represented many meanings to many people and cultures. 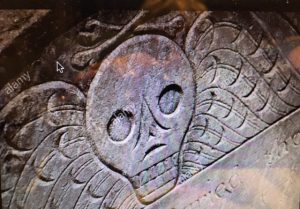 As best I remember, I first noticed skulls on old tombstones in Boston. Virtually every tombstone featured some version of a skull. A frequent depiction was a skull with angel wings, presumed to represent death and life after death. 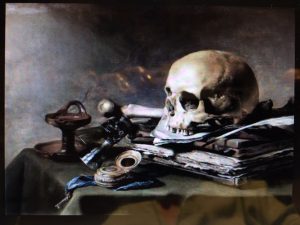 Subsequently, traveling abroad, I saw skulls in paintings, representing mortality, the swift passage of time, and that life is temporary.
In Rome, Prague, and cities in Portugal, I saw whole rooms and cathedrals walled and decorated with skulls, often honoring dead saints.

Skulls honoring the dead took a much more personal turn in Cuzco, Peru. Since Inca times, mummies of the dead emperors were kept in homes and played an important role as leaders in Cuzco. Traditionally, families kept the skulls of ancestors on small altars in their homes. The pictures above are not mine, but when there I visited a one-room Inca home still inhabited by a family where an ancestral skull rested on a shelf carved into the stone wall, along with a partly burned candle and dried herbs. The skulls of loved ones are said to be good company, and to watch over and protect the family and the home. 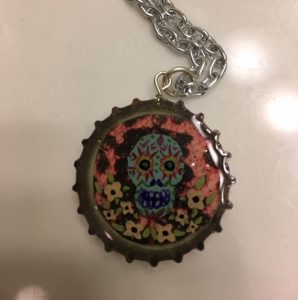 In Mexico’s Day of the Dead, dead ancestors and relatives are honored in a joyous celebration in which sugar skulls in bright colors create a celebration of life as well as death. 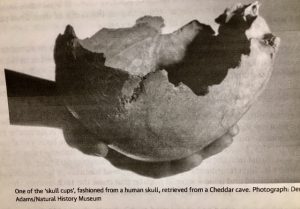 Using the domes of skulls as bowls, as ritual drinking cups, and/or as a tribute to the victor goes back millennia. The oldest known one was 12,750 BCE. Posting or displaying the heads of slain enemies is well known. It may be that people made skull cups to honor and remember their dead, but it could also have been to try to tap into magical or healing powers.
Skull medicine has a long history. In the 17th century, people would drink from skulls, drink the powdered skull, or imbibe the entire head. This was part of a widespread tradition of medicinal cannibalism using everything (bone, blood, flesh, and fat) that continued into the 18th and even the 19th centuries.

But I Don’t Do Any of Those Things With Skulls. 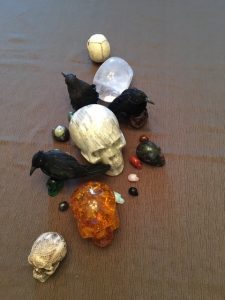 I have skulls for ornamentation and symbolism.  At first I wore skull scarves and jewelry for mystery book signings and panel presentations only. The more I looked at created skulls, the more attractive I found them to be. I’m not alone in this. A human skull with its large eye sockets is especially appealing to people and is easily recognized even in fragments. I especially like mineral skulls, and created this one-of-a-kind choker for myself. 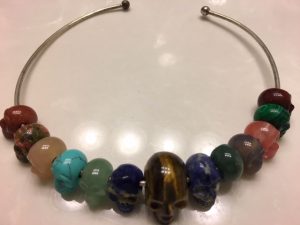 I first read about the power of stones for a short story, “Beast and the Beauty.” Interestingly, I didn’t come across any stone for which the asserted power is malevolent. And even more interestingly (to me), some ancient societies believed that objects like crystal skulls represent life, the honoring of humanity in the flesh, and the embodiment of consciousness. That appeals to me. 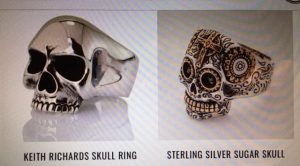 If you search for skull symbolism online, you will find a post on bikerringshop.com, “Behind the Bones: the History of the Skull Ring.” This anonymously authored post includes a lot of interesting info; for example, “To the Victorians, a skull ring was a way to celebrate lost loved ones and a reminder of the wearer’s own mortality.”
In addressing the complicated symbolism surround skull rings, they address the following topics. 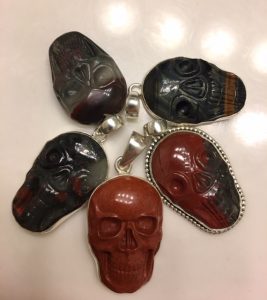 Actually, I have more pendants and earrings than rings, from the totally formal to the clearly casual.
BOTTOM LINE: Find out about skulls, consider their meaning, and enjoy them.