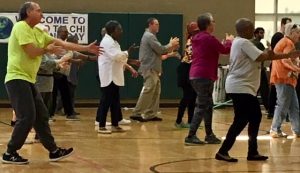 World Tai Chi and Qi Gong Day was great!
The Opening Ceremony was an elaborate Lion Dance from Virginia Commonwealth University. Costumes for the Lion Dance Team and Panda were compliments of The Confucius Institute at William and Mary College. Great fun! It was long and strenuous—and I wonder what sort of college student would join such a team, and agree to perform during finals week.
Some of the demonstrations were more reminiscent of the martial arts origins of tai chi, including swords, spear, saber and push hands. A focus on the martial arts application might get your character into interesting situations.
But the most frequent application of both tai chi and qi gong is health. For example, one of the groups present was veterans, practicing at the VA Hospital in Richmond. They work with both physical recovery and PTSD sufferers. Do you have such a character? 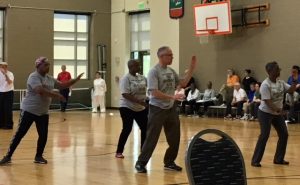 According to The Harvard Medical School Guide to Tai Chi, more than 600 academic papers have reported the beneficial effects of tai chi and qi gong practice on physical and mental health. Among these are enhanced balance, flexibility, and agility; increased immunity, muscle strength and aerobic capacity; lower blood pressure, improved heart health, reduced inflammation, and weight loss. Arthritis is a case in point. One of the participants said that she’d been incapacitated by rheumatoid arthritis for years before taking up tai chi—and she moved beautifully.
Among the mental health benefits are lower levels of stress, depression, and anxiety; increased mental clarity, focus, and positive thoughts; and a lower risk of developing dementia or Alzheimer’s disease.
The practice of tai chi is often called meditation in motion. Maybe it should be called medication in motion. And it is a life-long activity, low impact and slow but as good for you as cross-fit. Do any of your characters have health problems? Why not give them some?