Sociologists, economists, therapists, and every other sort of -ists have studied The Principle of Least Interest, but it’s incredibly important for writers as well. This is one of those areas in which science has confirmed what common sense has long maintained: the person who cares the least has the most power. This principle works everywhere from the housing market to the marriage market. (I wrote about this topic previously in 2015.)

If the buyer is more eager to buy than the seller is to sell, the seller will determine the selling price. If he loves her more than she loves him, he could end up the proverbial hen-pecked husband of so many comedies; vice versa and she is a candidate for the downtrodden foot-wipe—perhaps abused—wife of so many tragedies.

This principle is so well understood that sometimes people try to disguise their true levels of caring/interest (talk of other great offers forthcoming, flirting with or dating a rival). Inherent in disguise is the understanding that what counts is often the perception of least interest.

The First Take-Away for Writers:

For your characters, know who has the power (the least interest) and who is perceived to have it. And if your work has more than two characters, you need to understand the power relationships for each pair.

Unlike a credit score, people can’t go on-line and check out their power ratings. The primary reason that power relationships are often unclear is that the bases of power are virtually limitless: expertise, physical attractiveness, intelligence, wealth, athletic ability, knowledge of secrets, ability to make the other’s life miserable, being popular, great sense of humor—anything and everything that is important to that pair. Knowing the facts doesn’t tell you/the reader who has the power.

If she married him for the money and he married her for the Green Card, who cares more? What if we add in that she is beautiful and he’s a great problem-solver; she’s moody and he’s uncommunicative; he’s a natural athlete and she manages their money; they’re both extremely intelligent and care mightily for their two children. As the author, you can determine who has the power by giving weight to these factors based on the characters’ perceptions of what is important.

The Second Take-Away for Writers:

The Third Take-Away for Writers: 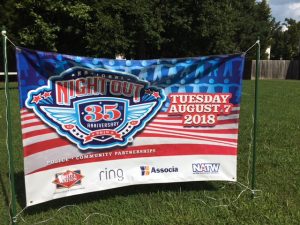 A week ago today, I helped staff a Hanover Safe Place information table at an Ashland event. I was reminded that relationships are crucial to a person’s health and well-being—whether that person is real or fictional. Today I’m starting a series of blogs on relationships. I’ve written about relationships before from various angles, but they are worth revisiting. 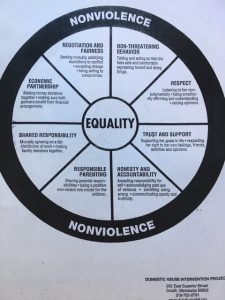 I’ll start with good two-person relationships. Although much of this is phrased for intimate partner relationships, it applies to other close relationships as well (e.g., family, best friends).
As illustrated in the wheel above, good, healthy relationships are based on equality and nonviolence. They include
Note to writers: Too often fictional characters are presented in idealized (and clichéd) relationships based on physical characteristics and/or sexual appeal. Make your good relationships richer along the above dimensions. 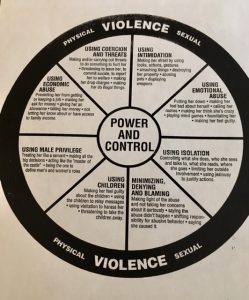 Various elements in the power and control wheel apply across types of domination, whether physical, sexual, or otherwise, and across settings (e.g., in the family, workplace, church, or community). These methods include
Note to writers: The examples presented in each of these categories are especially helpful in making your villains realistic—and varied!
As the historian and moralist Lord Acton said as long ago as 1887, “Power tends to corrupt, and absolute power corrupts absolutely.”
And one more note: it is a maxim of social psychology that the person who cares the least has the most power. Think about it!