On November 5th, I will be one of the featured writers at this year’s Festival of the Written Word, hosted by the Chesterfield County Public Library. 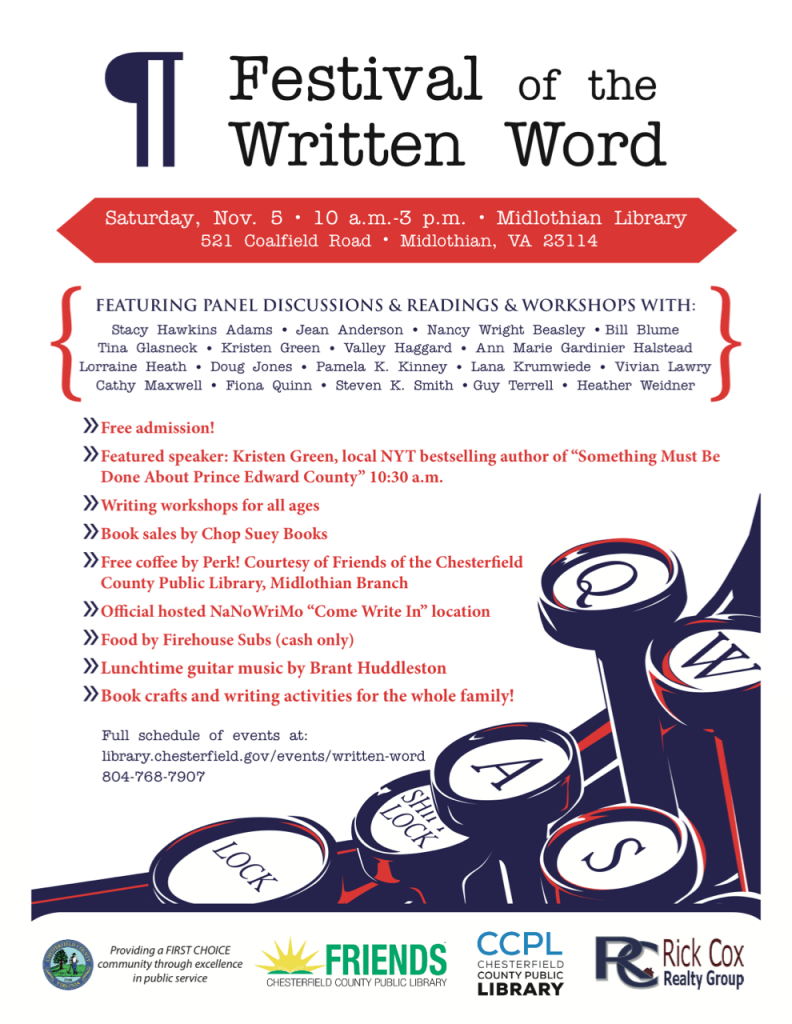 I was involved with the festival last year, speaking on a panel about romance and mystery. I’m excited to hear the other panelists and the featured speaker, Kristen Green, this year!

In addition to the events listed on the flyer above, the festival will include readings by various authors, workshops for writers of all ages, panel discussions with local authors (including me!), and, of course, delicious food provided by Firehouse Subs.

It’s a great idea for readers (and writers!) to take advantage of such festivals and literary events at their local libraries. They are typically free and open to the public!

Other featured authors include:

For more information and a detailed schedule, check out the festival’s website. Hope to see you there!

(Also coming up is the CCPL’s “Murder at the Library” event!)

In other news, I recently wrote an article for the Richmond Times-Dispatch. They have a weekly column entitled “In My Shoes.” I wrote an article, “Repair or redecorate after breast cancer?,” about the process following radiation, multiple surgeries, and a “persistent non-healing wound” after my breast cancer diagnosis. Check it out!

Murder at the Library

It is your chance to be the detective in the latest mystery!

Examine the crime scene, follow the clues and solve the mystery! You’re the detective in this interactive mystery night, with a script written by Sisters in Crime.

Mystery writers from the Sisters in Crime will take you behind-the-scenes with an author talk, book sale and signing.

Check out what is in the silent auction. Tickets and silent auction will benefit the Friends of the Chesterfield County Public Library.

Tickets are $25 ($40 per couple) and include two drinks and heavy hors-d’oeuvres. You can purchase tickets here.