Knowing things about one’s character(s)—even things that never make it onto the page—will keep those imaginary people in character, consistent, well-rounded, and flexible so that new plot twists and turns don’t leave the reader feeling like an entirely new person has been introduced.

They also help in making sure every character is not just a copy of the author, with the same political views, personal preferences, and general outlook on life. Indeed, there are profile pages that have questions about everything from birthdate/astrological sign, to medical conditions, to education, to family of origin, etc. . .

Which Brings Us to COVID-19

A worldwide pandemic is definitely an unexpected turn (unless your character is a historical tracking epidemiologist)! And rich with complexities. For the sake of better knowing your character(s), consider what the current pandemic would reveal. Remember that traits revealed by current events can be applied by authors to characters dealing with any historical, fantastical, futuristic, or imaginary setting.

This isn’t as singular as it first seems.  What is your character’s attitude/ behavior regarding masks? And why? Here are several possible choices. The Why is up to you!

What do your character’s masks look like? What quality or grade? Would your character confront someone about wearing/not wearing a mask?

Easy or difficult for your character?

With But Not of COVID-19

Would your character have a singular or varied response, depending on what’s being renamed? Consider the timing and speed of public opinion shift in the setting: immediately renaming provinces, shops, schools, and cities per government mandate during China’s Cultural Revolution versus the gradual shift of the capital of Kazakhstan from Astana to Nur-Sultan. 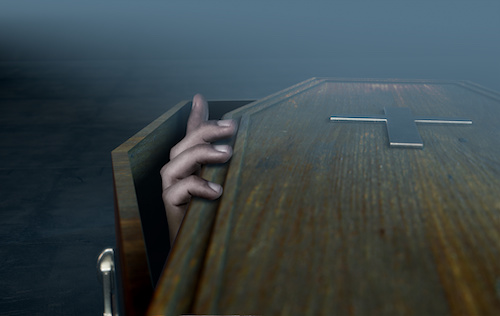 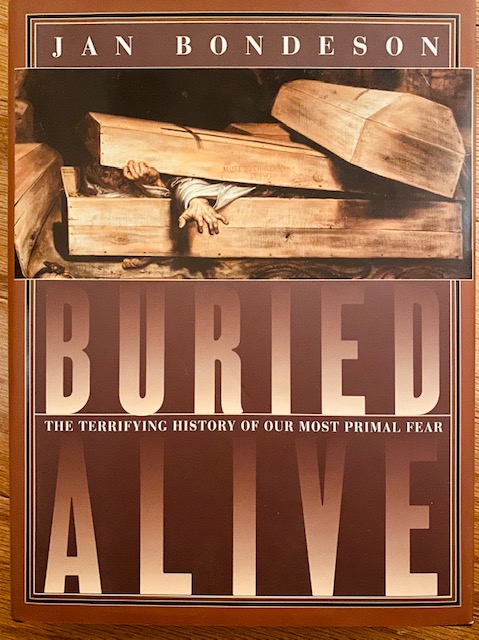 Fear of being buried alive is called taphephobia.  Also known as live burial, premature burial, and vivisepulture, it’s been around forever—and is with us still!  Those buried alive often die of asphyxiation, dehydration, starvation, or hypothermia.  If fresh air is available, the buried person can last days.
Fear of being buried alive reached a peak in 19th century England.  More than 120 books in at least five languages were written about it, as well as methods to distinguish life from death.  (See below.)
A Fine Literary Tradition
Consider Edgar Allan Poe’s “The Premature Burial,” The Fall of the House of Usher, and Berenice.  More recently, Stephen King’s 1987 novel Misery includes Paul Sheldon’s Misery’s Return, a book within a book.

Accidental or Unintentional Burial
Reports of being buried alive date back to the fourteenth century.  In spite of hype and hysteria, as late as the 1890s patients have been documented as being declared dead and accidentally sent to a morgue or encased in a steel box, only to “come back to life” when the coffin is dropped, the grave is opened by grave robbers, or embalming  or dissection has begun.
During centuries when embalming wasn’t common practice, coffins were mostly for the rich, and rapid burial was the norm especially during major pestilences such as cholera, bubonic plague, and smallpox.  In these cases, rapid burial was an attempt to curb the spread of the disease.
Several medical conditions can contribute to the presumption of death: catalepsy, coma, and hypothermia. 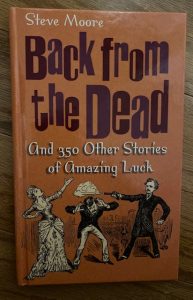 How to Know When Someone Is Really Dead
Jan Bondeson, author of Buried Alive, identified methods of verifying death used by 18th and 19th century physicians.  (Personal reaction: shudder!)  The methods were any acts the physician thought would rouse the unconscious patient, virtually all imaginatively painful. 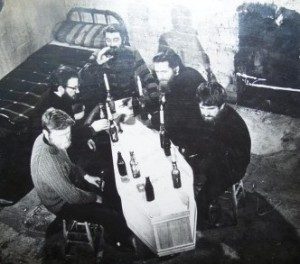 The traditional Irish wake was (and is) an occasion for family and friends to celebrate the life of the deceased while watching the body for signs of movement. 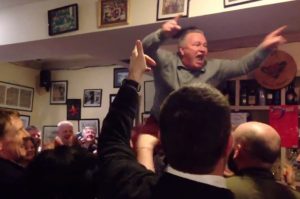 Most agreed that the most reliable way to be sure someone was dead was to keep an eye on the body for a while.  To that end, waiting at least 72 hours from apparent death to burial was mandated.  In the mid-1800s, Munich had ten “waiting mortuaries” where bodies were stored awaiting putrefaction.  Each body was rigged to bells to summon an attendant should the corpse come back to life.

We presume that modern science has surpassed this sort of mistake, defining death as brain death.  Even so, earthquakes and other natural disasters often result in people being accidentally buried alive.

But Wait: Sometimes People Are Buried Alive on Purpose!

Interestingly, most of the laws demanding live burial as a form of execution were for crimes committed by women.  Men convicted of comparable crimes were more likely to be beheaded.
When death was not enough, often a spike was driven through the body of the person executed by live burial, perhaps as a way to prevent the person from becoming an avenging, undead Wiedergänger. 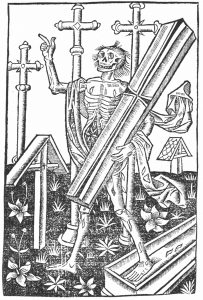 In some parts of the world, live burial is still practiced as a means of execution.  Often, the victim is buried upright with only their head above ground.  In these cases, death is very slow and painful, often the result of dehydration or wounds caused by animal scavengers.
And sometimes live burials are another horrific act of war.

Very rarely people willingly arrange to be buried alive, for any number of reasons.  Sometimes it is to demonstrate their ability to survive it.  The Indian government has made voluntary live burials illegal because the people who try it so often die.  In 2010, a Russian man was buried to try to overcome his fear of death, but was crushed to death by the weight of the earth over him.

There are even performances in which people have an opportunity to be buried alive for fifteen or twenty minutes.  As a publicity stunt for the opening of the 2010 film Buried, a lottery was held for a few fans to have a very unique viewing experience.  Four winners were blindfolded, driven to the middle of nowhere, and buried alive in special coffins equips with screens on which they could watch the film.  (A 2003 episode of “Mythbusters” demonstrated that, even if a person buried alive was able to break out of a coffin, they would be crushed or asphyxiated by the resulting dirt fall.)

Irish barman Mick Meaney remained buried under Kilburne Street in London for 61 days in 1968, mostly to win a bet.  Tubes to the surface allowed air and food to reach him in his temporary, underground prison.

Bottom line for writers: consider a character being buried alive—or being threatened with it—as a way to up the tension.
Live burial isn’t the only attention-worthy aspect of dead bodies.  For more, check out books such as these. 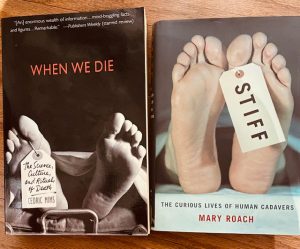 University of Kansas researchers found that by looking at photos of the shoes people wore most often, their subjects could accurately tell a person’s age, sex, income, and political affiliation. But they could also accurately assign certain personality traits—e.g., people in practical comfortable shoes are perceived as more laid back and relaxed—and they are. Those with masculine shoes are more uptight. People with plain shoes that look new are more likely to be anxious and insecure. 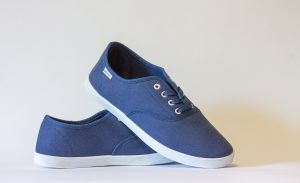 Overall, researcher Omri Gillath found that by examining the style, cost, color, and condition of the shoes, participants were able to predict about 90% of the owner’s personal characteristics. 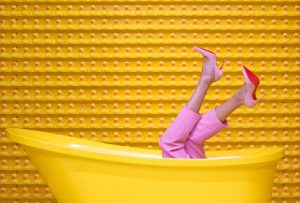 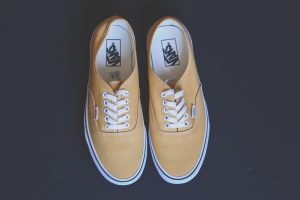 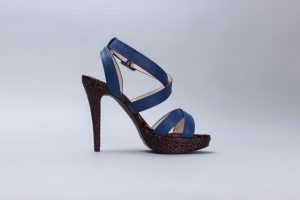 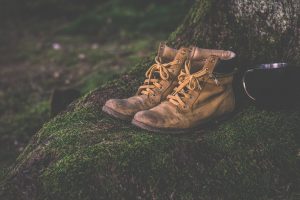 What A Woman’s Shoes Say About How She’s Feeling

These are perceptions of current footwear, not what is worn most often. 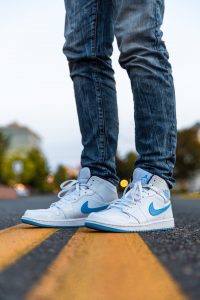 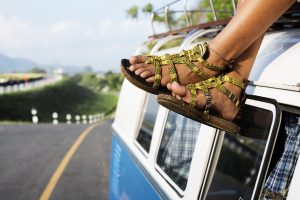 What a Man’s Shoes Say About Him

Again, these are perceptions, traits others attribute to the wearer, not validated by corresponding personality tests.
Usefulness to writers: (1) choose habitual footwear to reflect your character’s character; and (2) have your character choose footwear to create a particular impression.