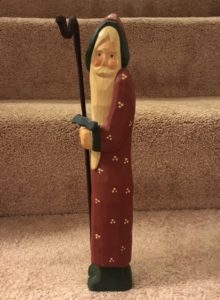 James Haddon is a wood carver. He came to my attention as a carver of Santas in particular—which I collect. His work is graceful, and each carving has character. These are characteristics true of good writing as well.
But my main point today is variations on a theme.  I was incredibly impressed with the breadth of his imagination when I noticed that he had carved both of these Santas.
Having noticed his range, I started looking for his work. Now that I have several of his pieces, I’m impressed with how his approach to the concept of Santa parallels what a lot of writers do with concepts crucial to them.
Many writers and teachers of writing say write what you know, or write your obsessions, or write your shadow (i.e., the dark side you usually hide). So, does that mean you write the same story again and again? Yes and no. Suppose your issue is abandonment—or poverty, crisis of faith, sibling rivalry, fear of failure, sexism, parent/child relationships—whatever. This will come up in your work again and again. The skill is to make it come up in different ways! 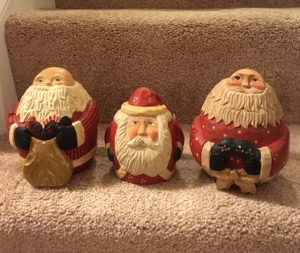 James Haddon’s concept of Santa is not unilateral! He looks at it from many perspectives. Sometimes, you need to change the entire shape of your presentation. A different genre, perhaps? 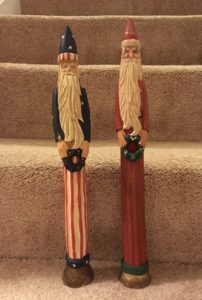 Sometimes, Haddon just tweaks the externals. For writers, this might mean changing the gender or ethnic heritage of the protagonist. The internal conflicts, concerns, struggles, or aspirations could remain the same but present a new perspective. 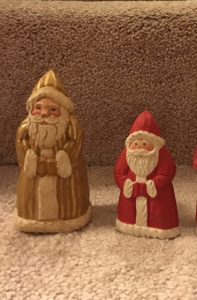 One can’t really change Santa’s age, but Haddon changes size sometimes, which I say is close enough. The point here for writers is, consider presenting your passion with a much younger or much older protagonist. 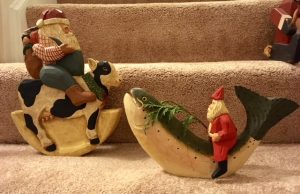 Sometime changing the context—putting your character into an unexpected setting—makes the message fresh.  Consider what James Haddon did with these two unusual Santas.
Last but not least, consider going back in time (or forward). These two “old world” Santas are good examples. The concept is still clear! 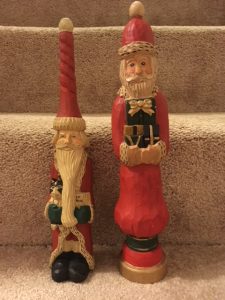