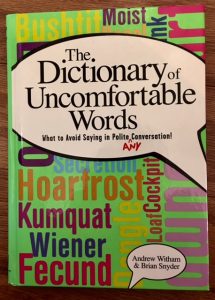 I had a high school English teacher who much preferred “it isn’t” to “it’s not” because, she said, the latter sounded too much like “snot.” Apparently snot was an uncomfortable word for her. Decades later, I still say “it isn’t.”
But that isn’t to say snot should always be avoided. Snot can be a very useful word for writers. The word has connotations beyond the definition and can imply, among other things, social class—for example, a snot-nosed kid—whether spoken by a character or part of the narrative.
The Dictionary of Uncomfortable Words is a collection of words that two men (Andrew Withan and Brian Snyder) label as uncomfortable. In that regard, it is personal opinion. They emphasize that this dictionary does not contain “dirty” words, just words that evoke a response of uneasiness in the listener/reader. Consider the power this gives you, the writer.
For example, if a character drops words like masticate, undulate, viscous, flaccid, or engorge into his/her speech, it might make other characters uncomfortable. And if the other character is unfamiliar with the word, such as invaginate would be for most people, then that other character could well feel insulted or offended—which could lead to any number of responses by the speaker.
Then there is the issue of whether the character/narrator uses uncomfortable words on purpose—and if so, what purpose?
Words like faggot, fairy, dike, gay, and queer are fraught with implications, not completely counteracted by a non-sexual context.
What words make you uncomfortable? Identify them and find ways to use them to strengthen your writing.
If words like lugubrious or luscious don’t readily come to mind, pick up this dictionary. It’s a treasure! 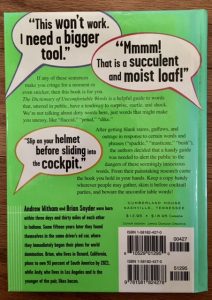