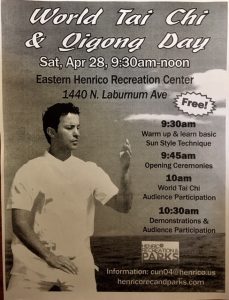 Come on down! I’m going to be there, performing tai chi moves and qigong breathing with other members from my class. Participants and watchers are welcome. There’s to be a lion dance in the opening.
I got involved in tai chi because I wanted to try something new and my sister-in-law had been practicing tai chi for years and telling me I should do the same. Now, this sister-in-law tends to think that everyone should think and do what she does—for she does things for good reasons. This is pretty much the first time I’ve succumbed.
So, tai chi is a Chinese martial art. (For alternative spellings of tai chi, go online.) Tai chi is practiced both for its defensive training and its health benefits. 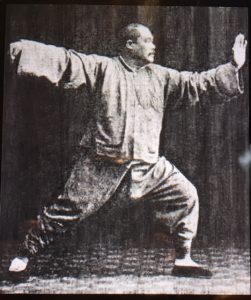 Tai chi, rooted in Taoist and Confucian Chinese philosophy, has been found to be beneficial for meditative movement and for general health. Focusing solely on the movements of the form bring mental calm and clarity, good for general health and stress management. The three main aspects are health, meditation, and the martial arts. 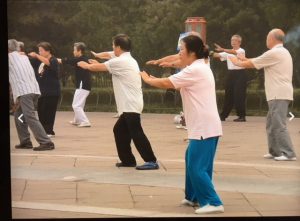 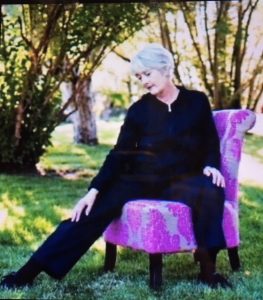 Which brings us back to World Tai Chi and Qigong Day. It is the last Saturday in April, annually. At 10:00 a.m. local time, people participate alone or in groups. The idea is that the wave of energy and goodwill will circle the globe, starting in the earliest time zones of Samoa and then traveling around the world until it ends with events in the last time zones of Hawaii, almost an entire day.
One of the stated goals of the day is to provide a global vision of cooperation for health and healing purposes across geopolitical boundaries, and also an appeal to people worldwide to embrace wisdom from all the cultures of the world. Who can argue with that? 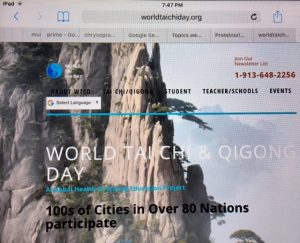 One breath… One world.