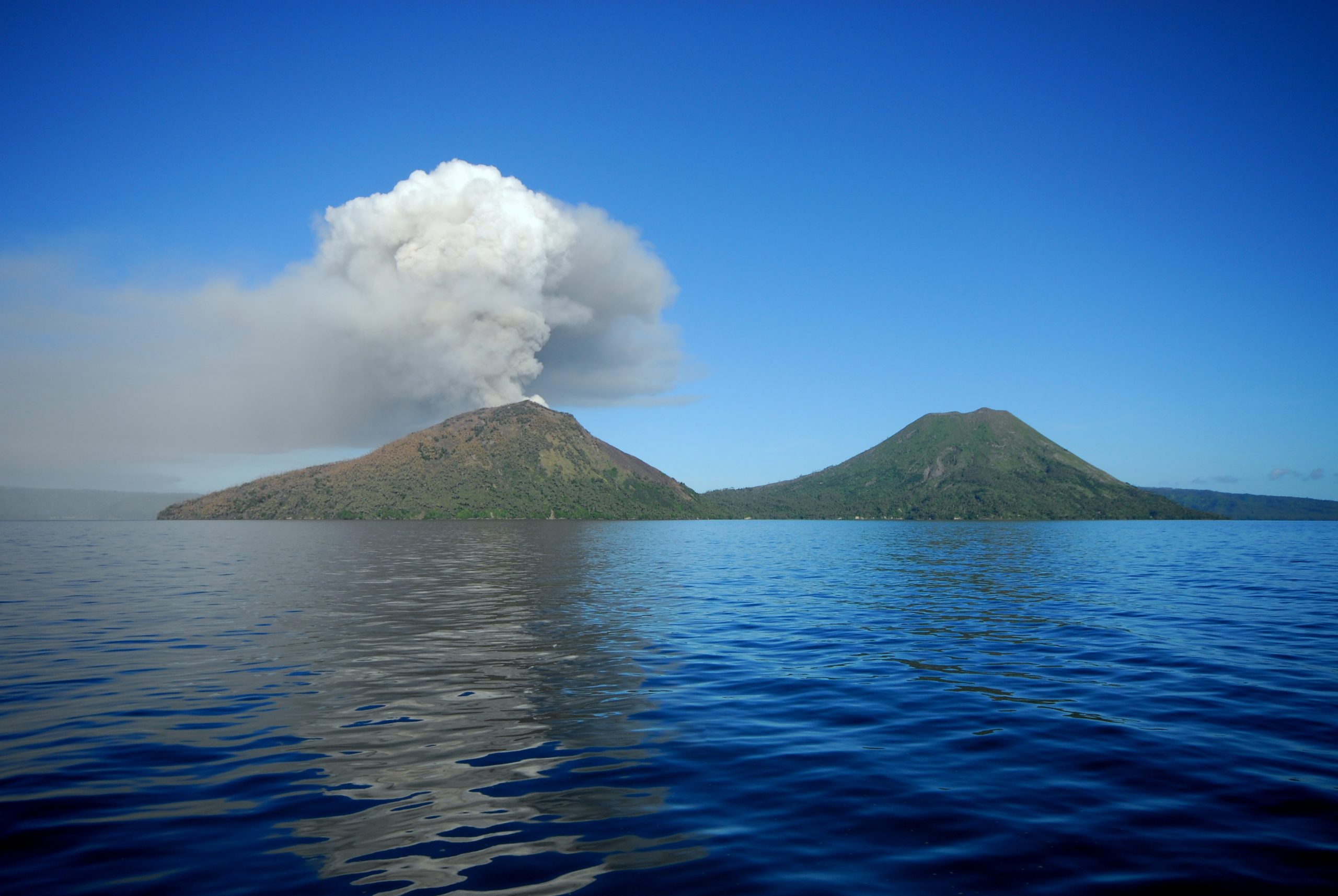 Papua New Guinea was long isolated from the rest of the world. The island is mountainous, and tribes located in tiny villages have warred with one another for five hundred generations. Even today, almost a thousand languages can be found (approximately 12% of all the languages spoken in the world). It is a wild place, where the outside world has had little influence, and cannibalism may be practiced, though there is some debate on how widespread the custom is today.

Archeological records suggest that pigs were introduced to New Guinea between 2,500 and 10,000 years ago, by way of a land bridge to Asia that has since disappeared.  Pigs play important roles among the peoples of Papua, especially so among those living in the Central Highlands.

Apart from pigs and deer (originally brought in by the Europeans) there are not many mammals on these islands.  So, yes, pigs are bred for their meat, but they are rarely killed just for eating.

Villagers say, “Pigs are our hearts!” Young pigs are treated as pets: they share their owner’s cooked food, are ritually named and baptized, are given magical treatments for illness, and women pre-chew tubers to feed to weak piglets.

The men own the pigs.  Although there is some assertion that women or children (rarely) own a pig, the counter argument is that the man has “given the pig into their care” and thus they speak of it as their own.

Raising pigs is an important responsibility, and there is no argument that women are the ones who care for these precious animals.

At birth, powdered lime is blown into the nostrils of the piglet to make it forget its natural mother and cause it to bond with its human one.

Pigs are named, and share the women’s sleeping quarters. The women pet and handle them. Occasionally, small pigs unable to compete against siblings or orphaned piglets were breast fed by nursing mothers.

(If you search for “woman suckling pig” online, you can find images: a Huli woman breast feeding a child and a piglet the same time; and a Chimbu woman in the Eastern Highlands of Papua New Guinea breast feeding a piglet.)

Pigs as Part of Ceremonies

Pigs are sacrificed in some places to appease the ancestral spirits, and they play central roles at major rites of passage: births, weaning of children, initiation of boys, a girl’s first menstruation, weddings, and funerals.  The most frequent occasion for eating pig meat is a funerary cremation.

Pig killing/eating accompanies many undertakings, such as house building and boat building.

Much feasting accompanies festivals in which local men of influence match themselves in prestige competitions.

Pigs are exchanged at peacemaking ceremonies after violent disputes.

A special occasion at which pig meat is eaten every day for weeks on end by men, women, and children, is during the major pig feasts, held at regular intervals.

There are two exceptions: a pig which is sick, and a pig which has been stolen. Such pigs would be consumed as soon as possible, without the usual ceremony.

Pigs for Status and Trade

Pigs are important symbol of political and social power.  The more pigs an individual has, the more pigs he can give away, leading to bigger feasts and a higher social status.

Pigs are the main dowry offered in exchange for brides.

The most valuable pig to own is a “tusker.” These are pigs which have had their upper canines removed by a specialist, so that their lower canines can grow unimpeded, sometimes—after ten or twelve years—turning in a full circle to re-enter the lower jaw. After the ceremonial removal, the owner will use spells and all-night ceremonies to enhance that growth.

Adult tribe members blacken their own teeth with manganese oxide because white, visible teeth signify aggression (like a pig’s tusks). Tusks are made into ornaments, which a man must kill another man to earn permission to wear. When men are challenging another tribe in battle, they clench pigs’ tusks between their own teeth to appear more aggressive: “Watch out. I can be like a pig. I am powerful and dangerous.”

BOTTOM LINE: Pigs are a very valuable commodity in this part of the world, because they are used to buy brides, in general commerce and trading, for feasts and important ceremonies. Pig ownership is a sign of a man’s wealth.  Thus—at (virtually) all costs—pigs are kept alive and pampered until needed. Seems like hog heaven to me!

You may be aware by now that March is Women’s History Month. This year, it is also Lent in most Christian faiths, nearly Passover by the Jewish calendar, and almost Ramadan in Islam. I thought it a good time to focus on a female scholar of Abrahamic religious history who has had a great deal of impact on me (and on the entire field of religious study: Elaine Pagels (pronounced Pay-gulls).

I grew up in the Evangelical United Brethren Church, but by the time I reached high school science courses, I had concluded that the entire King James Bible couldn’t be literally, factually true. In addition, I resisted many biblical teachings about women and women’s roles in the world and in the family. And I started doubting that the words of the bible were the words of God.

I first became aware of Elaine Pagels (pronounced Pay-gulls), née Elaine Hiesey, by reading her book The Gnostic Gospels. This groundbreaking book examines the divisions in the early Christian church, and the way that women have been viewed throughout Jewish and Christian history.

I came away with many questions, some of which I haven’t resolved to my satisfaction to this day:

Modern Library named The Gnostic Gospels as one of the 100 best books of the twentieth century.

Elaine Pagels, née Hiesey (born February 13, 1943), is an American religious historian. She is the Harrington Spear Paine Professor of Religion at Princeton University. Pagels has conducted extensive research into early Christianity and Gnosticism.  She started to learn Greek when she entered college, and read the Gospels in their original language.

She was part of the International Committee for the Nag Hammadi Codices, a team studying the Nag Hammadi Library manuscripts, also known as the “Chenoboskion Manuscripts” and the “Gnostic Gospels.” The thirteen papyrus codices were found sealed and buried outside the Egyptian town of Nag Hammadi in 1945. They contained several works written by members of the early Christian church and directly contradicted parts of the Bible that had been officially accepted doctrine for centuries.

Pagels received a MacArthur Fellowship in 1981 for her work with the Nag Hammadi research and how it related to the development of early Christianity. With archaeological evidence, she demonstrated how controversies over scriptural interpretation relate to certain social and political situations. She has published widely on Gnosticism and early Christianity, and continues to pursue research interests on topics that include sexuality and politics, visions, and the origins of Christian anti-Semitism.

Elaine Pagels’s most recent book is very different from her publication. Why Religion? A Personal Story is a description of her own relationship with religion and how it changed over time. She discusses what originally led to her questions of faith in 7th grade and how studying religion helped her get through the loss of her young son and husband. With her own story, Pagels confronts questions of religion’s place in modern society and how religious traditions shape personal experiences.

In 2013 she received an honorary law degree from Harvard University, her alma mater. Elaine Pagels was awarded the National Medal for the Arts by President Barack Obama in 2016.

Pagels deserves attention during Women’s History Month because she has led so many to separate scholarship, belief, and doctrine, and to examine the role of each.

How much thought have you given to your characters’ feet? And shoes? Feet and shoes tend to go together, and both can be valuable as character details, plot devices, and sources of conflict. But let’s start with the basics. Are bare feet good or bad? Yes!

The Upside of Bare Feet:

The Downside of Bare Feet:

Bottom line for writers: What are your characters’ attitudes and behaviors regarding feet and shoes? And why?