Skip to content
Everyone has secrets. Anything that is known only to oneself (maybe one other person) is a secret. It can be a regret, betrayal, desire, fear, confession, past humiliation—anything unknown. 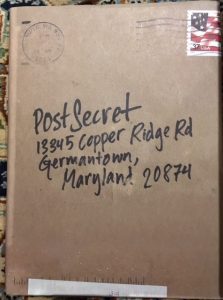 Frank Warren tapped into the breadth and depth of secrets when he invited people to return postcards anonymously revealing a secret as part of a group art project. The response was extraordinary, and Post Secret became an international phenomenon—and a book. Here are three randomly selected offerings from this book.
“I can’t think of a secret. Except—I don’t think I’m interesting enough to have a secret.”
“I don’t care about recycling (but I pretend to).”
“I didn’t tell people I was running a marathon for fear they’s be nauseated by visions of my FAT ASS bouncing down the street.” 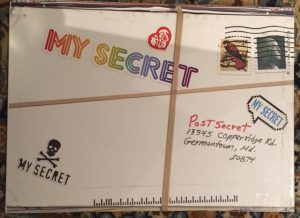 The art project ended but the postcards kept coming. In two years he received over 50,000 postcards. This led to a second book, containing many secrets shared by young people. Here are three examples.
“If I charged the people I babysit for by the SCREAM I’d be rich.”
“I’m only friends with rich girls.”
“I told my family, the school nurse, and my optometrist that I couldn’t see the last rows just so that I would get glasses like my friends.”

Eventually there were so many postcards that they could be sorted into related themes. The result was The Secret Lives of Men and Women.  The secrets revealed include the following:
“I’ve been with my wife for twenty years and she doesn’t know who I am.”
“I didn’t take a pill last night. Even if you leave me, I’ll have part of you to love forever.”
“I have both a wife and a girlfriend and I’ve never been lonelier.”
“All of my exes bat for the other team.” 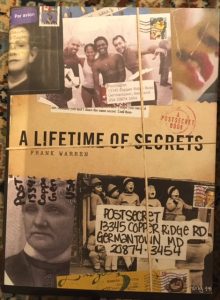 Many secrets have a hold on a person for years. Many of these are captured in A Lifetime of Secrets. For example,
“I still remember my rapist’s birthday.”
“My best friend slept with the only man I ever loved. Their son is in college now. I still drive by their house.”
“I only allow myself to read your letters once a year (9/17). Then, I let myself fantasize how my life would be different if you were still around. Sometimes I find myself hating you because it’s easier than missing you.”
“Finally I truly wish you well.”
Why give your characters secrets? It adds depth to them, makes them more like real people. In addition, depending on the secret, it can add humor, intra-psychic tension, or the motivation for behavior in various situations. Feel free to give a character a secret of your own. Or make one up. Or consult Frank Warren’s treasure troves!