The last Saturday in April is Independent Bookstore Day, which made me think of such bookstores I have known and loved. The first was during my college years in Athens, Ohio. Logan’s was way more than a bookstore. One could buy Ohio University memorabilia and textbooks, of course, but also everything from greeting cards to Vanity Fair underwear!

My next bookstore love was during my years in Canton, New York. It, too, sold more than SLU textbooks and related items. My cookbook collection started there. Everything from candles to pottery was at hand, as well as the work of local writers and artists. When it moved into what was once a hockey arena, the expanded space allowed for a coffee bar and comfortable seats scattered about.
Both of these bookstores are located in small towns with no easy access to larger cities, and so they took on the character of general stores of old.
Indie bookstores in cities are typically more focused on books and closely related items, such as journals, bookmarks, etc. And sometimes they have a specific mission. For example, Politics and Prose spotlights political and social issues in the books it caries and in the speakers it features.
I tend to seek out independent bookstores wherever I spend a lot of time. The Tattered Cover in Denver is an old, multi-story bookstore carrying books for all ages and interests. One can easily spend hours browsing books, magazines, and newspapers. The space is charming, with sunken reading pits, elevated areas, and appealing woodwork. And people ready and willing to help one.
The Fountain Bookstore on East Cary Street, in Richmond, is much more intimate than the Tattered Cover, but Kelly Justice is a treasure. She owns and operates the store and often features book signings and talks by local writers. Do stop in!
Other independent bookstores in the Richmond area include Chop Suey Books, bbgb Tales for Kids, Book People, Stories, and RED Books.

Independent bookstores are more than just stores; they’re community centers run by passionate readers. They are as good as secondhand bookstores in offering the possibility of serendipitous finds. In addition, they support the local economy through job creation and tax dollars. So buy local!

Independent Bookstore Day is a one-day national party that takes place at indie bookstores across the country. Every store is unique and independent, and every party is different: authors, live music, cupcakes, scavenger hunts, kids events, art tables, readings, barbecues, contests, and other fun stuff. Check out what’s happening in your area! 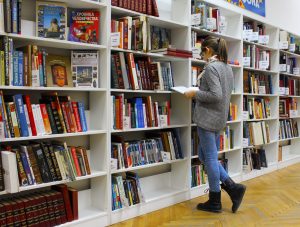 In a world of tweets and on-line searches, bookstores are not dying out.  They continue to grow and expand and enrich the lives of readers and communities. So prepare to party down tomorrow!