Skip to content
Poe was a writer, literary critic, and editor, the first well-known American writer to try to earn a living exclusively through writing. In spite of his prolific output, he didn’t earn enough to support himself, let alone live comfortably.
Although Poe died at the age of forty, this book contains 119 short stories and poems and one novel. His literary criticism isn’t represented at all in this volume, nor are his essays on writing, such as “The Philosophy of Composition,” “The Poetic Principle,” and “The Rationale of Verse.” His first publications were poetry, and he published 53 of them, but his work covers a much broader spectrum: 27 tales of mystery and horror; 25 stories of humor and satire; 14 that veer toward fantasy and science fiction. His novel is an adventure yarn. “Eureka” is a disquisition on the nature of the universe, and his vision has been largely confirmed by science, for example the Big Bang Theory.
Despite the breadth of his writing, he is best known for poetry and suspense/horror. He is often called the father of detective fiction—preceding Arthur Conan Doyle and Wilkie Collins by decades—while his contributions to cosmology and cryptography are known to relatively few. Besides being brilliant, Poe was a fine athlete. (He once set a broad jump record of 21’6″.)  But he is most remembered as a man who suffered bouts of depression, whose career and life were burdened if not destroyed by gambling and alcohol, and who was plagued by scandals ranging from his marriage to his 13-year-old cousin to courting multiple women simultaneously.
To this day his death is shrouded in mystery. Where had he been for the previous several days? What was he doing? Why was he wearing someone else’s clothes? And who was the “Randal” he called out for from his deathbed?
Nevertheless, he is celebrated and honored across the country, including an annual Birthday Bash in Richmond, Virginia.
This year the event included a panel presentation and book signing by members of two local chapters of Sisters in Crime. Among other things, we spoke about Poe’s influence on our writing.
This is the biggest celebration of Poe’s birthday, the events and fun running from noon till midnight. Let Poe’s lights shine on! 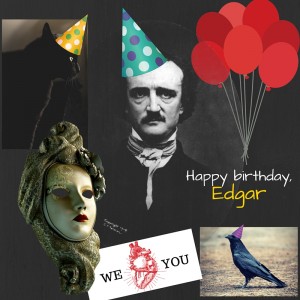