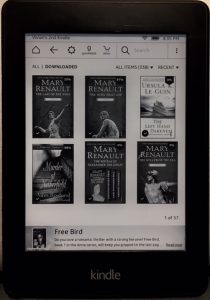 I’m picturing and talking about Kindle here because that’s what I have, but I assume other e-readers have the same characteristics. No doubt some of the points I make will be already known to you—for example, portability and convenience. As you can see in the above picture, my Kindle currently contains 338 books. That’s hundreds of books at my fingertips—i.e., hundreds of choices, virtually anytime, anywhere.
Then, too, any book can be read in large print. Sometimes, depending on fatigue, people who don’t usually need larger print temporarily do! Then, too, one can control the brightness to read comfortably in varying ambient light. And, not insignificantly, new e-books cost considerably less than their physical counterparts. (One can often find great prices on old books, overstocks, books in library book sales, etc. The downside is often not being able to get the book you want, when you want it.) 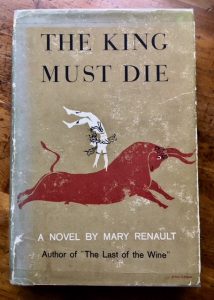 I recently started rereading Mary Renault. She was a favorite of mine years ago, and I decided to revisit her work and see what I think of it now that I write fiction myself. I’m not disappointed! She writes well: strong verbs, vivid action, good sensory appeal (especially visual), a well-rounded protagonist, and excellent weaving together of myth and archaeological evidence.
But, frankly, I don’t know how I made it through the physical books! For example, The King Must Die has a cast of thousands (only a slight exaggeration), references to gods who are (to me) only vaguely familiar, complex family relationships, unfamiliar geography, and lots of references to antique items and geology. KINDLE TO THE RESCUE! By holding my finger on an unfamiliar word, I learned that keeking means peeping surreptitiously, porphyry is a reddish igneous rock, greaves are shin armor, and hundreds more! Where in the past I would have skimmed the unfamiliar or approximated meaning from context, my e-reader gave me a much richer read. 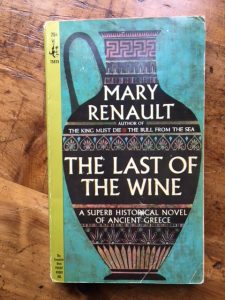 The King Must Die was such a joy, I’m now on the next. Indeed, I’ve downloaded every Renault Amazon has available. (FYI, I binge read authors I really like.) And I believe every reader of the unfamiliar, whether fiction or nonfiction, can have an enhanced read on an e-reader.
Bottom line: Reading on an electronic device is an opportunity to broaden vocabulary, deepen general knowledge, and make the esoteric available to the non-expert!