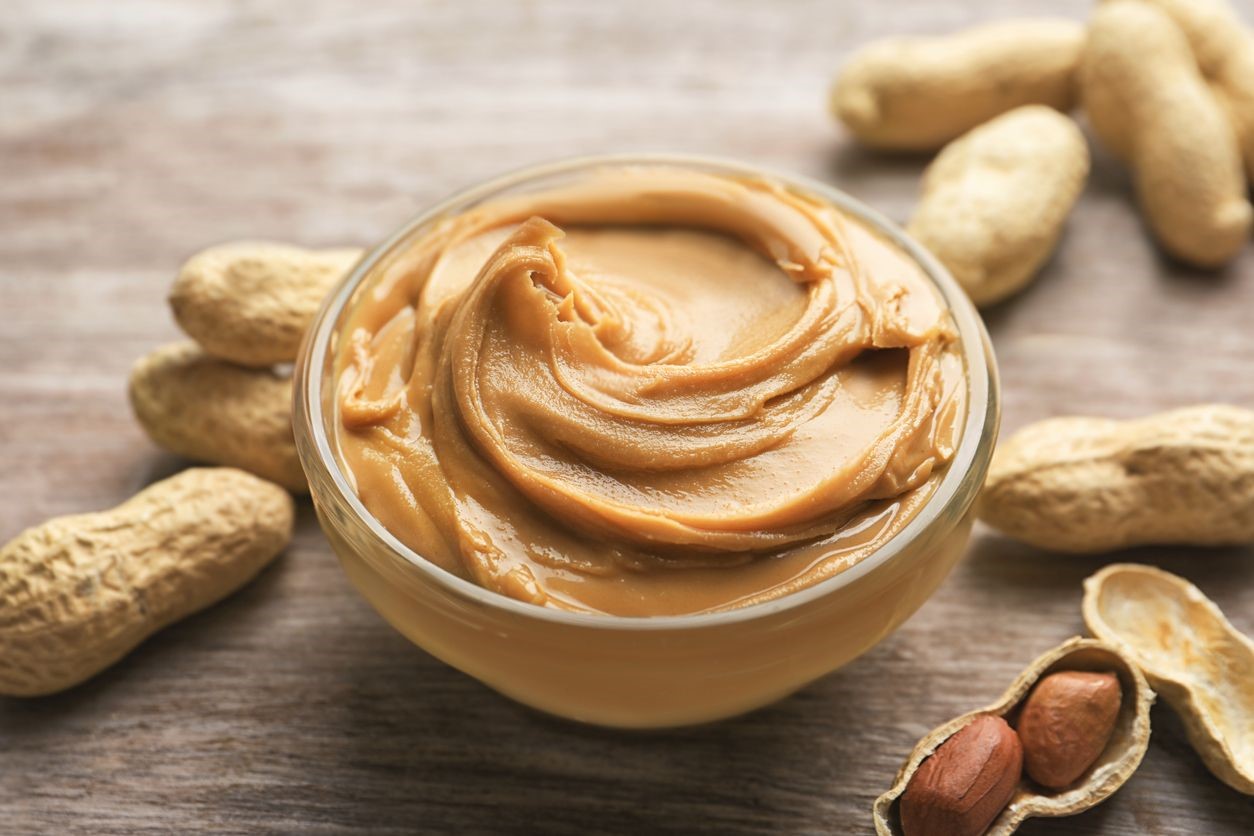 March 1 is your day: National Peanut Butter Lover’s Day. (The whole month of March is National Peanut Month.) Seeing that observance on the calendar is what prompted me to dig into the topic of peanut butter—and peanuts in general.

Peanut Butter with Everything

I’ve never been a big fan of PB&J sandwiches—sacrilege, I know, given that the National Peanut Board estimates that the average child will eat 1,500 PB&J sandwiches before graduating high school—but my earliest peanut butter love was peanut butter on pancakes with a splash of maple syrup. My father ate them that way, as did/do all his children and grandchildren. The last time I was in IHOP, my favorite wasn’t on the menu, which I found incomprehensible.

Among my other go-to options are smoothies with peanut butter, bananas, and chocolate. And speaking of chocolate, I’ve been known to swirl peanut butter with chocolate syrup for a sweet treat. Peanut butter is also great on Granny Smith apples, when I want to nod toward healthful. And let’s not forget peanut butter fudge, with or without chopped nuts, chocolate chips, etc. And trail mix. And chocolate chip cookies. And smoothies. And, and, and . . .

Writing my recent blog on snacks and snacking (February 1, 2022) I noted the following among favorite snack pairs, in descending order of popularity

What is/are your favorite combination(s)?

In 1996 I bought The Peanut Cookbook by Dorothy C. Frank, a library discard with a copyright date of 1976. But good recipes never die! Recipes are grouped in the usual categories: appetizers and nibbles; soups, salads, main dishes, vegetables; breads, biscuits, and breakfast; desserts and candies. There are dressings for vegetable salads; sauces for poultry and meat; and “syrups” for sweets. Peanut Butter Meatloaf with Sweet Potato Frosting doesn’t appeal to you? Turn the page! Even recipes that don’t tempt you to attempt are interesting to read.

One of the candy recipes is for Jimmy Carter’s favorite peanut brittle recipe.

Have I at least tempted you to check on-line recipes?

Not quite the same kind of peanuts, but I’m sure they’re delicious!

George Washington Carver was an agricultural scientist. He created more than 300 products from the peanut plant, but peanut butter was not one of them! By 1916 when he published “How to Grow the Peanut and 105 Ways of Preparing it For Human Consumption” patents related to peanut butter preparations had been granted to various pharmacists, doctors, and food scientists.

If not Carver, then who? And when? According to the National Peanut Board, there is evidence that ancient South American Inca Indians were the first to grind peanuts to make peanut butter. They speculate that the peanut plant originated in Peru or Brazil. People in South America made pottery in the shape of peanuts or decorated jars with peanuts as long 3500 years ago.

As early as 1500 B.C.E. the Incas used peanuts as sacrificial offerings and entombed mummies with peanuts to help them in the afterlife. Central Brazilian tribes ground peanuts with corn to make a drink.

But no version of peanuts or peanut plants made a direct trek north. European explorers took peanuts from South America to Spain. Explorers and traders carried peanuts to Asia and Africa. Africans introduced peanuts to the U.S./North America in the 1700s.

By 1783 Suriname had a food called peanut cheese. More solid than peanut butter, it could be sliced and served like cheese.

In the U.S., peanuts were first grown in Virginia and used for oil, as a cocoa substitute, and as food  for livestock and the poor. Peanuts were considered difficult to grow and harvest. Their popularity grew (geographically and otherwise) as a result of Civil War soldiers on both sides subsisting on them (and presumably finding them tasty).

P. T. Barnum’s circus vendors called “hot roasted peanuts” for sale as they traveled across the country in the late 1800s.

Before peanut “butter,” there was peanut paste. In 1884, a Canadian named Marcellus Gilmore Edson was granted a patent for his paste, made from roasted peanuts.

Dr. John Harvey Kellogg (of cereal fame) invented a version of peanut butter in 1895, patented in 1898, that he served at his Western Health Reform Institute. Kellogg was a big proponent of plant-based food instead of meat, and for a time it was considered a food for the wealthy because they were the patrons of the expensive health care institutes. Peanut butter, like sushi and lobster, morphed from food for the poor 9and livestock) to food for the elite. But it really burst onto the public stage at the St. Louis World’s Fair in 1904.

Peanut butter became a popular source of protein during the two World Wars, being provided to troops by the Armed Forces. Recently (2020), on average, Americans ate 7.6 pounds of peanuts and peanut products each—probably even more now. In March 2020, during the COVID-19 pandemic, 299.34 million ate peanut butter; retail sales of peanut butter in the U.S. increased by 75% over the level in March 2019.

Although National Peanut Butter Day is past (January 23), there are more chances to celebrate in 2022!

Mark your calendars! And there are plenty of days open to create a peanut celebration of your own!

From the National Peanut Board, here are just a few reasons why:

FYI: it is estimated that < 1% of the population have a peanut allergy.

BOTTOM LINE: If you aren’t a peanut butter lover now, you could be!