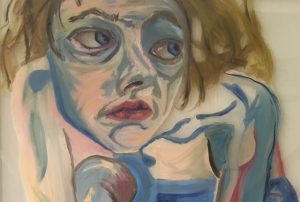 We are prone to assume that fear is a bad thing—but not so for writers! Giving your characters fears is just one more way to make them real.
I’ve been on a character jag recently, writing about birth order, secrets, and exercises to better understand your characters and build realistic ones. Lately it seems that everywhere I look I find another tidbit. Such was my reaction to this article in the Ohio University alumni magazine. 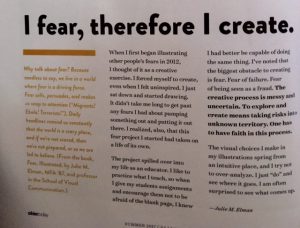 This half-page article is about the book Fear, illustrated by Julia Elman, a professor of visual communication. It is absolutely relevant to writers. As Elman says,  “…we live in a world where fear is a driving force. Fear sells, persuades, and makes us snap to attention.” I will add that giving your characters fears makes them more real. 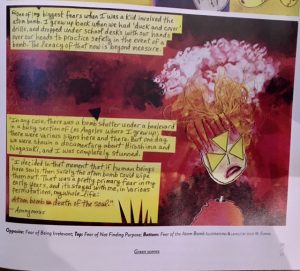 Your character’s fear could be a big one—in which case, it might be shared by many. The end of the world as we know it or other cataclysmic disaster is a staple in the action/adventure/suspense genre. 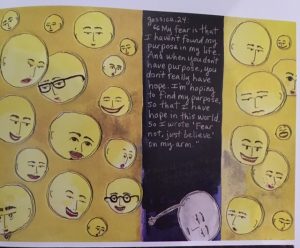 More personal fears are more generally relevant to character building. Here, the prime example is fear of failure. But it could also be a fear of death or personal disaster that drives much of a character’s behavior, especially in the mystery genre. 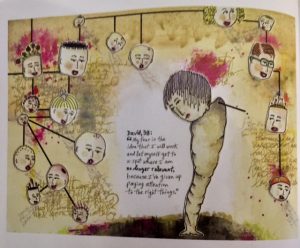 Fear of loss is a great one. It can lead to all sorts of desperate measures to prevent a loved one ending a relationship, a child from leaving home, an employee becoming irrelevant…
Personal fears can be anything, from a debilitating phobia to a source of humor. Consider the agoraphobic, so fearful of open spaces that s/he can’t leave the house. On the other hand, someone who fears insects could go to comic extremes to protect, home and garden. You get the idea.
Bottom line: Give at least some of your characters fears that advance the plot. 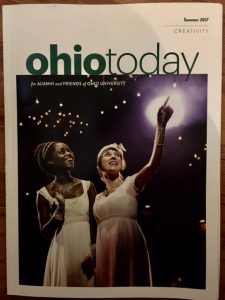 For more on creativity, see the Summer 2017 issue of ohio today.