Skip to content
Definitions of magical realism abound. Merriam-Webster defines it as “a literary genre or style associated especially with Latin America that incorporates fantastic or mythical elements into otherwise realistic fiction.” Here’s the definition I am using for this blog: supernatural, paranormal, or unexplainable phenomena which are included and accepted as reasonable within a work of fiction. It could be spiritual, or just plain weird.
Charles Hoy Fort is a goldmine for writing magical realism. He was an American writer and researcher into “anomalous phenomena” who combed scientific writing, libraries, and newspapers to find reports of such phenomena. He is best known for four books, still available today: The Book of the Damned (1919), New Lands (1923), Lo! (1931), and Wild Talents  (1932). He doesn’t try to explain the phenomena he reports, nor does he posit theories. He takes a “just-the-facts-ma’am” approach. Each phenomenon gets a few pages, with various instances cited—providing a solid base from which writers can launch into literary magic.
In my opinion, Fort’s reports are timeless. He covers things like showers of frogs and blizzards of snails—many extraordinary, and unexplained, skyfalls. He reports having collected 294 records of showers of living things. He writes of ice images, millions of years old, that are later expressed botanically in an onion. He writes of teleportation, spontaneous fires, ball lightning, unexplained disappearances, and alien abduction. Such phenomena have subsequently been labeled Fortean, and Forteana used to characterize collections of them. 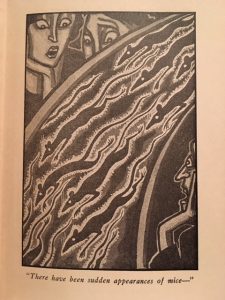 Although I consider Fort’s original works timeless, if you want something more contemporary, check out The Fortean Times magazine, in print since 1973.
Although Charles Hoy Fort has been recognized for his influence on science fiction writing, consider the writings of Fort as a source of inspiration for writing magical realism!