In honor of our Wrinkle in Time re-read, join me and authors Lenore Gay and Sadeqa Johnson for a giveaway! 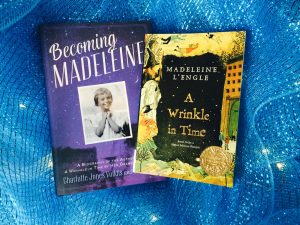 Up for grabs are:

The giveaway has already started and will go until March 13. Good luck!

I’m very pleased that Dr. Heidi Hammel agreed to a print interview about this book! I’ve long believed in the power of books, especially for young minds. My childhood home didn’t have children’s books but I recently read A Wrinkle in Time for the first time. Dr. Hammel’s experience makes me wish I’d had it as a child!

VL:  How did you come to read A Wrinkle In Time?

HH: On my tenth birthday, in 1970, my 11-year-old brother gave me a copy of A Wrinkle in Time. This was the scholastic paperback edition, blue with series of concentric rings around three small characters.

VL: What was going on in your life at the time?

HH: I was just a kid, a young girl specifically, at a time when girls did just girl things. Sugar and spice and everything nice. Glass ceilings everywhere. Invisible glass ceilings—most girls didn’t even THINK of doing things other than being a wife, a nurse, or a teacher. Maybe a daring girl could be a flight attendant or a secretary. But no real girls did science or space research or math. (Madame Curie was a unicorn, a historic anomaly, not a real regular person.)

VL: I can absolutely identify with that. I read the Cherry Ames series about the adventures of a nurse. Although she was a great role model in many ways—daring and caring and a problem solver—in high school I wanted to become a surgeon. Although I was valedictorian of my class, I was counseled to become a nurse instead—albeit with a B.S. degree so I could move up in administration. I do admire your determination! But tell me, in what way(s) did the book affect you?

HH: The book blew my mind. Here was a girl like me – her physical description was mine, from the limp non-descript hair to the glasses and teeth that would need braces; her school life was like mine – interested in things that other girls were not like atomic particles and space, and not really accepted as “popular.” Yet, for all her faults – indeed, specifically BECAUSE of her faults – she completed a hero’s journey. What an eye-opener. What a LIFE opener. A literal literary role model. If an ordinary girl like Meg could find her father across all of space and time, then all things were possible for me. When, years later, a special teacher suggested I apply to MIT for college, I had a “WWMD” (what would Meg do) moment, and said “sure!” The rest is history, as they say.

VL: Did you ever reread A Wrinkle In Time? When and why?

HH: I’ve reread A Wrinkle in Time many times over the years. During my high-school years, as an undergraduate at MIT, while in graduate school for physics, as a young mother, and even now. I reread books I love, because the stories ring true, and because I sense different overtones based on who I am and what I have experienced in my own life. Things that may not have registered to me as a 10-yr-old, or 30-yr-old, or a 50-yr-old take on new meaning when viewed through the lenses of varied experience.

VL: So true! In my younger years, when my primary escapist reading was murder mysteries, I never reread them. Once you know “who done it,” what’s the point? The exception back then was Jane Austen, whom I discovered in college and have reread many times since. Now, since I started writing them, I seldom read mysteries. My escapist reading goes in all sorts of directions and I reread often! I also tend to give books I love to others. Have you ever given A Wrinkle in Time to others? If so, who and why?

HH: I gave this book as gifts to friends as a young girl, especially those friends who I thought might share in the vision of what young women could be and could do.

I read it aloud to my own children, so they could travel through the tesseract with me to worlds so different from – yet so like – our home planet.

VL: What other books by Madeleine L’Engle have you read?

HH: I’ve read all of her books. The complete Kairos and Chronos series, as well as her books for adults.  I admit to enjoying the “young adult” books more than the books specifically for adults.

VL: Has any other book been as influential in your life? If so, please elaborate what, when, and why.

HH: I think the only other book that comes close to having a visceral impact on me would be Ray Bradbury’s The Martian Chronicles. In this book, Bradbury paints a tapestry of human exploration on Mars through a series of short stories that are as much poetry as science fiction. The stories are deeply human emotional stories, but told from the perspective of Martian natives. It was brain-bending in an orthogonal way to A Wrinkle in Time but nearly as powerful and evocative.

VL: What a recommendation! Perhaps I have my next escapist read lined up. But to close out here, what else would you like to say about A Wrinkle in Time and/or Madeleine L’Engle?

HH: My hope is that each generation of girls and boys have Madeleine L’Engle’s books placed in their hands at a young age.

VL: I join you in that hope! And thank you again for sharing your experience with and thoughts about this powerful book.

Planetary astronomer Heidi B. Hammel graduated from MIT and the University of Hawaii, and did her post-doctoral work at NASA’s Jet Propulsion Lab. She is Executive Vice President of AURA, which operates astronomical observatories including the Hubble Space Telescope. Dr. Hammel is also an interdisciplinary scientist for NASA’s next great space observatory: the James Webb Space Telescope. She has been profiled by The New York Times and Newsweek Magazine, and in 2002 Discover Magazine identified her as one of the 50 most important women in science. Dr. Hammel has been lauded for her work in science communication, including the San Francisco Exploratorium’s 1998 Public Understanding of Science Award. Asteroid “1981 EC20” was renamed 3530 Hammel in her honor. You can read more about Dr. Hammel here.

As you may recall from earlier posts, I recently read the Throne of Glass series by Sarah J. Maas, and I committed to reading A Wrinkle in Time by Madeleine L’Engle before the March premiere of the movie.
I’ve now started reading A Wrinkle in Time, and I’m stunned by the sharp contrasts between the two. While both are fantasy fiction, they are virtual opposites on the major dimensions. Here are a few I’ve noticed so far.
Age in WIT: Meg is approximately 13, Calvin (her love interest) is 14, and Charles Wallace is 5 years old. Meg and Calvin are typical teens in a realistic school when the story opens.
Age in TOG: Celaena/Aelin is approaching her 18th birthday when the series begins and ages to 20 over the series; her early love interests Sam, Cael, and Prince Dorian are approximately her age; her later love, Rowan, is hundreds of years old. Celaena excels as a trained assassin. Her love interests are assassins, warriors, and magic wielders.
Affection in WIT: Meg and Calvin hold hands, Calvin puts his arm around her (so far).
Affection in TOG: Lots of sensuality, moderately explicit, including nudity, sharing beds, and sexual union.
Commonality: In both books, the heroines feel safe and protected by their loves.
Assistants in WIT: Gentle, helpful assistants in the form of supernatural beings with names such as Mrs. Whatsit, Mrs. Who, Mrs. Which, The Happy Medium, and Aunt Beast.
Assistants in TOG: Fae Warriors, a shape-shifter, Ironteeth witches, assassins from the desert, armadas from other kingdoms
Evil in WIT: IT, a bodiless telepathic brain who controls people, making them do the same things together in the manner of robots—absolute conformity; and The Black Thing, who is the source of all evil in the universe, and that’s about all the specificity about him.
Evil in TOG: The ultimate evil is Erawan, who enslaves others to be his minions (e.g., the King of Adarlan) in conquering everyone, everywhere using death and destruction, torture, beings who can take over another’s skin, and a magic “key” that allows him to gather beasts from the realm beyond the portals and create animal/human hybrids.
Why these stark differences? I can only speculate. It may be partly that the target audience of WIT is younger than the target audience of TOG. Then again, WIT was published in 1962 and TOG was published in 2012. Maybe young adults now are older than they were fifty years ago.
Stay tuned: I’ll blog again when I finish A Wrinkle in Time.