Skip to content
In case you didn’t know, MacGyver was a superhero type TV series from 1985 to 1992 starring Richard Dean Anderson. As the series unfolded, Angus “Mac” MacGyver became a wonderfully rich character, a great example of what a well-rounded character looks like on the page as well. Here, to help you flesh out your protagonist are things you need to know—or at least consider. Your readers will love you for it.
Name: A character needs a full name, and (in my opinion) should have a reason to have been named that. Family name? Parent’s favorite from history or fiction?
Personality: MacGyver was portrayed as a non-violent problem solver who always carried a Swiss Army knife and refused to carry a gun. When the plot called for physical violence, his acts were always in self-defense and he strove to subdue or disable rather than kill. He is pretty much the opposite of macho, having a sensitive nature and showing it. He (appropriately) showed grief, pain, fright, guilt, depression and self-blame.
Social awareness: MacGyver was passionate about social causes, with a particular affinity for things related to children and protecting the environment. At some point, he became vegetarian. What is your character’s attitude toward such things as social justice, global warming, etc.?
Intelligence: MacGyver had a genius-level IQ and had a college education in both physics and chemistry.
Skills: MacGyver could speak six languages—plus he could communicate using American Sign Language, Morse code, and International maritime signal flags. He skied and had mastered outdoor survival skills. He possessed superb engineering and applied physics knowledge. Besides his Swiss Army knife, MacGyver usually carried duct tape, an ID card, a Timex Camper watch, strike-anywhere matches, paperclips, chewing gum, and a flashlight—plus whatever was in his Jeep or pickup truck. Thus, he was able to save a man’s life using a paperclip, a wrench, and shoelaces. 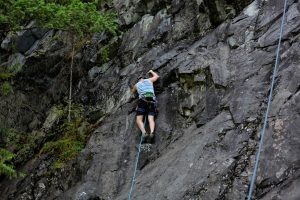 His hobbies included dice hockey, racing, guitar, and painting. Although suffering from acrophobia (fear of heights) he managed mountain/rock climbing, hang gliding, parachuting, etc.
What skills and/or specialized knowledge can your character draw on? Think education, past job experiences and military service as well as hobbies and sports.
Biography: MacGyver’s biography—which I believe was fleshed out as the series progressed—accounted for all of his special skills, fears, and taboos, from the outdoor survival skills taught by Mrs. Fogarty, his Cub Scout Den Mother, to a fatal accidental shooting that led him to eschew guns. Advice to writers: as soon as you give your character a skill, fear, etc., jot down—if only for your own use—how and when it was acquired.
In 2016 the series was revived starring Lucas Till as a younger Mac MacGyver. Supposedly this is the equivalent of a “prequel.” Thus, this Mac functioned between the original’s birth (January 23, 1951) and the beginning of the original series. And therein lies the rub. This “younger” MacGyver carries through with major characteristics, including intelligence, preference for non-lethal methods, and the ability to use his Swiss Army knife plus anything in his environment to accomplish his mission. In addition, he’s an accomplished field medic and uses modern crime scene techniques—in which he might just have been ahead of his time. But DNA sequencing procedures? That I couldn’t quite accept.
Last advice to writers: Should you ever want to write a prequel, be aware of what your character couldn’t have known or experienced at the time.
And just in case you want some MacGyver type skills for your character, check out these books. 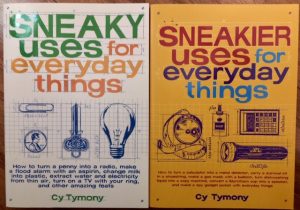