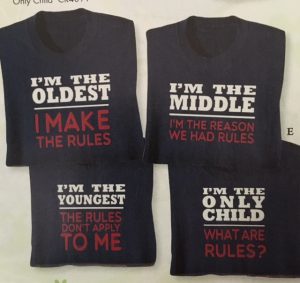 The importance of birth order is so widely recognized, there are even T-shirts about it! And every good novel that involves family relationships takes birth order into account, either directly or indirectly.
You probably know Jane Austen is one of my all-time favorite authors. Her books are rife with sibling relationships. Partly, that reflects the period in which her novels are set. In the 19th century, at least among the gentry, birth order determined everything from how one was addressed (Miss Bennett vs. Miss Elizabeth) to who inherited titles and estates.
But birth order goes much beyond the social niceties. For example, in Pride and Prejudice, birth order of the five Bennett daughters is a recurring theme, with much being made of Lydia’s position as the spoiled baby of the family. The dour Mr. Darcy’s personality reflects his position as the only son charged at a young age with the care of his estate, tenants, and a much younger sister. Colonel Fitzwilliam’s position as a second son determined everything from his career choice to his marital prospects. Charles Bingley is manipulated by his sisters.
More recently, you have four sisters who thrive as individuals (Little Women) but also a family falling apart (Sound and the Fury). In the latter, Quentin is hypersensitive, aware of sibling issues but unable to act, and considers suicide; Jason is jealous, tries to dominate, and wants to put Benjy in an institution; everyone tries to protect Caddie, who gets pregnant out of wedlock; and Benjy, the youngest, is feeble-minded and pure.
Perhaps my brain just isn’t functioning well this morning, but as best I can recall, among mystery writers, sibling relationships’ primary role relates to the victim and the suspects. Not that there’s anything wrong with that. But what about the sleuth—whether professional or amateur?
Consciously giving your main characters siblings—or not—makes for a richer, more realistic portrayal. This is true whether they are present on the page or only in the thoughts or awareness of the character. This is especially true for series characters.
Reams of psychological research exists to determine the effects of birth order and explain how those effects come about. But here’s a quick-and-dirty crib sheet to get you started.
First borns are high achieving, conscientious, approval-seeking, risk-averse, anxious, emotionally intense, defensive, and prone to jealousy.
Latter borns are more competitive (especially second-born, same sex), rebellious, liberal, agreeable, flexible, sociable, able to compromise, build coalitions, negotiate, and adopt peacemaker roles.
Last born children are more likely to question rules, develop a revolutionary personality, and expect others to serve them; they’re also less likely to volunteer or take responsibility.
Only children share many characteristics with first-borns; they may feel like outsiders, are extremely mature, aloof, and expect special standing.
Things to keep in mind: 1) the generalizations are based on group data, so there are wide individual variations; 2) effects are moderated based on the sex of each child and the age gap between them; family patterns often transfer to the workplace or social relationships.
Bottom line: Consider your character’s siblings. 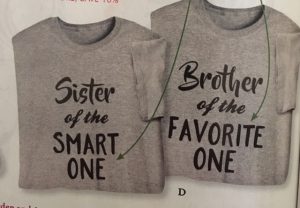