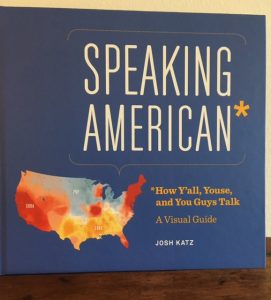 A new tool to help the writer get it right.
During my first trip abroad, I was amused to learn that Europeans make a distinction between speaking English and speaking American. No doubt I was just naive. This was before I started collecting dictionaries, or surely I would have noticed.
It was sometime later that I read Bill Bryson’s wonderful book The Mother Tongue: English and How It Got That Way. 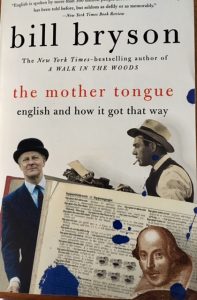 Bryson leads us on a wonderful romp through English from the beginnings of language to its future. It’s a laugh-out-loud read, but fair warning: there is a lot of information here. My sister-in-law never finished it, she said because she could never remember all that detail. I read it for the laughs and the big picture, so no problem.
Bryson’s book was published in 1990, and it’s still a great read. Richard W. Bailey’s Speaking American was published in 2012, and is more focused. As you can see from the Table of Contents, he follows a timeline by exploring key cities. Bailey was a long-time professor at the University of Michigan, and his book is academically solid—but it’s very accessible and much more entertaining than you might expect!
So why did I start this blog with an image of Speaking American? Because this is a book writers can use as well as enjoy! As the cover indicates, it is a visual guide. In Speaking American* How Y’all, Youse, and You Guys Talk, Josh Katz highlights some of the myriad quirks of American English and literally shows you where people talk that way. 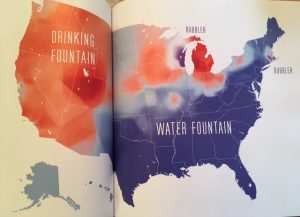 For example, he gives the big picture of where people say drinking fountain versus water fountain, but also the really weird spots (my label) in Michigan and New England where they say bubbler. Think what a delightful detail that could be if you have a scene set in a bubbler locale. 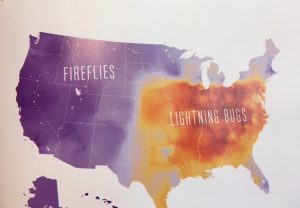 You can glean other helpful details as well. For example, besides knowing where, in general, people say firefly rather than lightning bug, you can also get down to very specific locales. 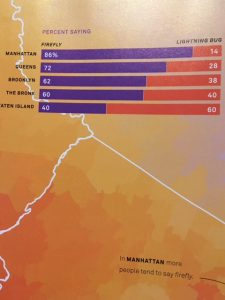 And  you can choose a label according to the time when your story is set. 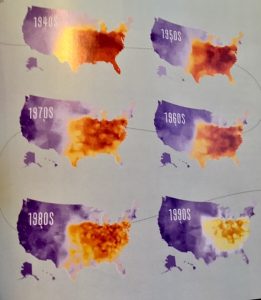 I grew up saying lightning bug. I mourn that they seem on their way to language extinction. 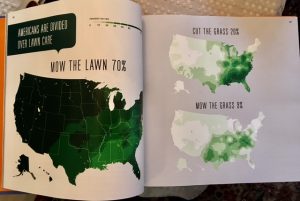 Finally, by cross-referencing, you can learn whether the same people who are likely to cut the grass (as opposed to mow the lawn or mow the grass) are likely to be wearing tennis shoes, gym shoes, or sneakers; would refresh themselves with soda, pop, or coke (not necessarily Coke); and spend time catching crayfish or crawdads. This book is a writer’s delight. Even if you don’t need or want it to write authentic dialogue, it’s a fun read and is likely to make you appreciate even more the nuance in the stories you read. 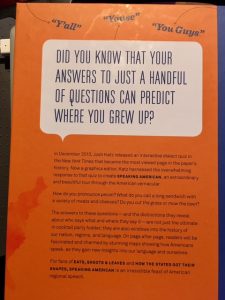